Vibrant and diverse at the slaughterhouse 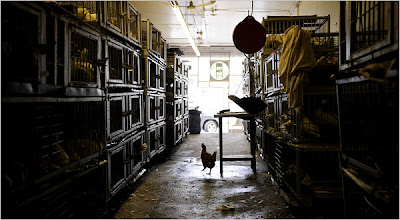 There are about 90 live-poultry markets in the metropolitan area. That number has doubled since the mid-1990s, state officials say, because of the demands of immigrants from countries where eyeballing your meat while it is alive is considered common sense. About a quarter of the markets are also licensed to slaughter larger livestock.

Perhaps inevitably, when it comes to killing animals for food, immigrant Queens clashes with suburban-homeowning Queens: Some of the people who worry about factory-produced meat are unenthusiastic about having mom-and-pop abattoirs next door.

Last year, residents of St. Albans, Queens, blocked a small slaughterhouse from opening on Farmers Boulevard. One resident, Marie Wilkerson, told The New York Times that she feared its stink would ruin backyard barbecues. Their state legislators pushed through a law barring new slaughterhouses within 1,500 feet of a residence for four years, effectively freezing the expansion of slaughterhouses in most of the city.

It's funny how the city government thinks it is acceptable to have these places within steps of people's homes. From a city planning standpoint, this is just bad. The smell that emanates from these places is vomit-inducing and should not be allowed anywhere near residences. And someone needs to educate newcomers that just because an animal "looks" healthy doesn't mean it is. Especially when you read a line like this:

"More-established market owners say that some new businesses skirt the rules or do not understand them."
Posted by Queens Crapper at 12:07 AM

It's funny how the city government thinks it is acceptable to have these places within steps of people's homes. From a city planning standpoint, this is just bad. The smell that emanates from these places is vomit-inducing and should not be allowed anywhere near residences.

How about our fellow preservationists? What is their position on this?

When did these one million or so Santaria savages who have turned most of Queens into a 3rd world cesspool become immigrant's ?

All this stuff getting flushed into our sewer system and street drains is going to create plague or virus.
Its just a matter of time.

Why are they not in industrial areas? Oh, I forgot, no industry.

That is also why you cannot madly build on every piece of ground.

Some of the newest and hottest developments in Long Island City are built on cancer central. If the yuppies knew what was under their million dollar apartments they would drop dead now.

Cap the soils with concrete and put slaughterhouses on the land once it has been remediated. If the birds drop dead pre-slaughter, we'll know schools on that land might not be a good idea either.

Oh, by the way. What about the sewerage for these sites as well. Bird flu anyone?

Actually, slaughterhouses in the city are nothing new. Jews as well as Muslims eat their meat, and even some people who want fresh food.

We had these businesses, as well as poultry businesses that sold fresh eggs in Astoria, near the Con Edison plant when I was growing up, and my mother bought the fresh eggs there.

The problem is, don't site them directly under everyone's noses. This is why we have zoning laws, just to educate the maniacs who become incensed when someone dictates limits to their private property rights.

No one is interested in the free market when it is their neck on the chopping block and their property values going to hell on a sled.

I don't understand how the stench of these places doesn't drive away the people who patronize them. I wouldn't be able to eat anything that came from them with that smell in my mind.

I wouldn't be able to eat anything that came from them with that smell in my mind.

And where do you think the meat in your supermarket comes from, Candyland? Nope, it comes from a "kill floor" every bit as foul smelling as these places.

Oh, yeah! Queens Krap brings out the best in us.

I know where they come from stinks but is not in the middle of a residential community. Understand the difference?

A worker slices the throats of Rhode Island Reds, uttering a prayer each time, according to the rites of Islam.
You ain't seen nothing yet!

Just wait until the "religion of peace" starts slaughtering sheep in the streets during Ramadan!

Then the fun begins!

Wade, I feel we are living 1984 every day. Double plus ungood.