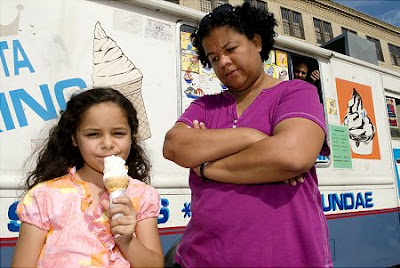 The caption for this photo in the Daily News reads: 7-year-old Lindsey Tourgeman enjoys a vanilla cone from a local soft serve ice cream truck, under the disapproving eye of her mother, Melissa, in Brooklyn.

Now when I saw this initially, I thought that maybe the kid was stealing the mother's money to buy ice cream or that grandma/grandpa was slipping her an Abe Lincoln now and then. But then I read the article and became astounded.

“It’s very frustrating that they’re here every day,” said Carroll Gardens mom Meryl Allison, who picks up her son Ben at Public School 58 and has to take him past a Mister Softee truck to go to Carroll Park across the street. “You’re a trapped audience. It’s hard to say no to your kids.”

Wha? A NYC mama not able to say no? I do not recall my mother having similar issues when I was a kid. In fact, she said no more times than I remember her saying yes. And what I wanted must not have been all that important because all these years later, I can't remember anything I had asked her to get for me in the first place.

“I’ve had fights with my daughter in the past about it. You kind of feel like it’s pushed on you,” said Tourgeman, who said she lets her 7-year-old daughter Lindsey get a cone about twice a month.

“It’s one thing if they’re just in the neighborhood, but to be here by contract [with the city], they might as well be selling drugs.”

Honestly...just say "no" and stop whining to the papers.
Posted by Queens Crapper at 12:09 AM

You mean... there's a market for this stuff, the Soft Serve? And if people don't wanna buy it, they shouldn't complain? They should just shut up and not buy it?

Hmmm... I wonder if the same logic could be applied to the housing market. Like condo towers.

Isn't it cheaper to buy ice cream in the supermarket when it's on sale - 2 1.5 quart containers - than to shovel out $ to Mr. Softee?

What's the deal with scarfing ice cream from a truck? The communal activity?

Who's in charge here? So if the kid throws a tantrum for the latest Disney cheapquel DVD or electronic gizmo, Mommy can't just put her foot down and say "no?" I guess that's the way "society" is these days.

Answer me this: who is in charge, the child or the parents. Evidently, it's the child. When I was a kid, NO meant NO and that was that. These parents are big baby whiners and had better grow up and become the adults they'e supposed to be!!!!!!! Give me a break.

Here is what a friend's aunt did when her children were toddlers. She stocked her refrigerator with store bought ice cream.

When the truck came by, she grabbed the child's hand and danced with her, saying "the music man is here, let's dance." Afterwards, the child got a scoop of his own ice cream dished out.

Mister Softee is a NY institution - I can still rememeber The 2 men who drove the Mister Softee truck in my neighborhood for many years - Tito and Loui. Only then a cone was 25 cents - not $2.00. Now you can get 40 cones at BJ for $12.00

they are raising another generation
of spoiled brats

I have an easy solution. I don't take any $$$ with me when I pick my son up from school or take him to the little league game. Done.

Being one of nine children my parents could'nt afford the Mr. Softee truck. For many years I watched the other children on the block eating ice cream. It made me sad and to this day I can still remember those feelings. I have worked hard and can easily afford to buy my children ice cream from the truck and I do and watch them enjoy it, it make me feel good and if I see any children around without a cone I buy one for them also!

That's why my mother used to make me eat my snacks in the house. "If you take it outside, you have to share..."

Mister Softee, lmao back in the day it was the real shit. today it's the name but not the company. i tell my boys not to eat the crap because they're dirty and driving around all day, where do they go to the bathroom and wash their hands. One time i bought the ice cream off northern and 48 street and the shit came out too soft which means not cold enough and bacteria. Parents take control of your children and SAY NO.........

Assemblyman Felix Ortiz (D-Sunset Park), who has long battled junk food and is pushing for a “fat tax” on sugary treats, said the trucks need to make sure to offer healthy options if they are to be allowed outside parks and schools.
What's this? Another politician trying to score cheap political points, by acting as a "nanny" to the stupid citizens?

What kinds of "healthy options" is Mister Softee going to offer? Soy bean popsicles? The only idiots who'd buy that for their kids would be the white liberal jerks in Park Slope. I'd hate to be one of those kids!

Some parents said the ice cream critics need to lighten up.

“It doesn’t really bother me,” said Moira Camarda, 34, as she cooled off in Carroll Park while sharing an ice cream with her 3-year-old son, Christopher. “It’s summer. It’s just ice cream.
A voice of sanity, in a wilderness of stupidity! Thank you, Ms. Camarda!

And now, I'd like to dedicate one to the ladies...

I got bim bam banana pops, dixie cups
All flavors and pushups too

I'm your ice cream man baby, stop me when I'm passin' by
See now all my flavors are guaranteed to satisfy.....

so you ARE one of those guys

Can't say no to a kid? This is why kids go through life no with the feeling of entitlement and has a casual attitude about debt

You mean... there's a market for this stuff, the Soft Serve? And if people don't wanna buy it, they shouldn't complain? They should just shut up and not buy it? Hmmm... I wonder if the same logic could be applied to the housing market. Like condo towers.This is about kids begging their parents for stuff. Kids aren't begging their parents to live in condo towers. Most of the tower people don't have kids. And if they did they'd probably be asking for a backyard...

Everyone has a right to make money.... and every Mom has the right to say no. Kids are so fat and now we might know why... parents can't say no!

Sarah (definitely not Palin) said:
"Being one of nine children my parents could'nt afford the Mr. Softee truck. For many years I watched the other children on the block eating ice cream. It made me sad and to this day I can still remember those feelings. I have worked hard and can easily afford to buy my children ice cream from the truck and I do and watch them enjoy it, it make me feel good and if I see any children around without a cone I buy one for them also!"

I also came from a very large family, and it was a natural, everyday experience to not get something I wanted.

Are we supposed to get everything we want?

Or, is there some need for self-restraint?

We are NOT entitled to everything we see someone else enjoying.

What weak-willed, spoiled creatures we become when we are given anything we desire. What sad lives the entitled live.

Linda: "..where do they go to the bathroom and wash their hands."

Confiteor populi. My first summer job at the age of 16, was as a Good Humor Man selling ice cream from a pushcart on the streets of Astoria. One day I was moving the cartons of pops around in the cart to make more room and to rearrange the dry ice when a Toasted Almond pop fell out of the cart, out of its wrapper and onto the street. No one was looking. I dusted it off, reinserted it into the wrapper and sold it to someone later on.

Sounds like Taxpayer is a bit angry at someone, I hope its not me. I do not consider myself entitled to anything in life. I have worked hard and still do; I have sacrificed and still do. But success can mean many things including being able to buy my kids ice cream if I want to. And by the way, I also drive a big SUV because I want to and I have a big house with central air that I run from April to November and I take 4 weeks vacation every year including Disney and the Atlantis in the Bahamas and I spend lots of money on clothes and send my children to private school, all because I want to. I grew up poor but I like having cash better.

You are a kind lady Sarah. Have you ever read the parable where a vineyard owner decides to pay his last-hired, half-crippled, ancient workers the same as everyone else?

What scandal! God forbid you should show charity, it really pisses everyone off.

taxpayer is very angry; and sarah is very kind. and if you read carefully, they're both saying the same thing. raise your children with a firm and respectful hand, don't be afraid to say "no", and charity belongs in the private sector, not w/ government.