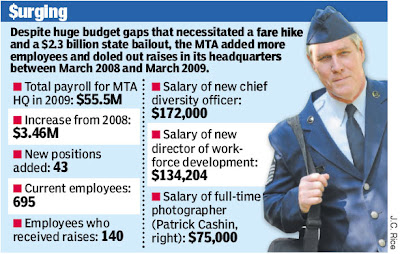 The MTA burned through $3.5 million in the past year to increase staffing and hand out raises in its headquarters at the same time it cried poverty and begged for a $2.3 billion state bailout.

Between March 2008 and March 2009, 140 directors, managers and other employees who work in the MTA's main Madison Avenue offices received raises, according to a Post analysis of agency records. Of these bump-ups, 79 came without title changes.

In the same period, the Midtown HQ's headcount surged by 43 staffers to 695, records show.

The new hires included a $75,000-a-year photographer, a $117,000-per-year director of police support and a $134,204-a-year director of workforce development. Also, for $172,000 a year, it brought on a "chief diversity officer" who is supposed to help give contracts to minority-owned businesses. All were newly created positions.

Who needs those pesky, evil, high IQ white and Asian males who work in fields such as computer engineering, electronics, software, etc.?

We need more "chief diversity officers" in this country, in order to help us compete with the Chinese and Indians!

Why bother with math and science, when you can simply hire more "chief diversity officers"?

The economy is in the toilet, our government is printing more money, jeopardizing our future, but we can sleep sound at night, knowing we have "chief diversity officers" hard at work!

Looks like someone tickled Little Wade's special spot. He knows, like the rest of us, that giving minorities a "hand up" is just as bad as giving them a "hand out." They should never be allowed equal footing with their white superiors!!! No job opportunities for our legacy downtrodden!!!

Whatever. Diversity Officer aside, (how hard can that job be that it requires that much compensation?), I don't really care about total salary increases that are minuscule percentages of percents of the MTA budget. This is not AIG, folks. Find something else to enable your outage dopamine receptors.

He knows, like the rest of us, that giving minorities a "hand up" is just as bad as giving them a "hand out." They should never be allowed equal footing with their white superiors!!!
The "soft bigotry of low expectations" at play. Otherwise known as left wing "racism".

minority owned businesses are locally owned and create more NY jobs. If the city bought supplies from a NYC vendor rather than Staples that is $65million dollars less to Staples and $65 million into NYC economy and taxes

I don't always agree with Wade, but he hit the nail on the head. It's a BS job for a crippled, gay, black or Hispanic hermaphrodite. And at $172? My god, that's more than the a DA or Judge makes. that's more than a some doctors make!

minority owned businesses are locally owned and create more NY jobs.How do they create more jobs? If that was the case, then why not hire a minority to head all the Fortune 500 companies? Then our country would be "swimming" in jobs, no?

If the city bought supplies from a NYC vendor rather than Staples that is $65million dollars less to Staples and $65 million into NYC economy and taxes
So the city should automatically give preference to a minority contractor, overpay for supplies, and this will help our economy? Why not simply award contracts to the lowest bidder? If the city pays more $$$ for supplies, that's simply a transfer of wealth from the city to "tweeded" minorities. The city pays more, gets less supplies, and the taxpayers (us) end up paying more $$$. How does this help us?

Geez, this website has alot of people who hate minorities.

I've seen the English only America rants (when Americans abroad have the highest tendencies of foreigners not to adapt and learn the language of their new residence) and anti immigration BS.

These are the same people who think it's illegal for undocumented immigrants (which is not, anyone can own property)to own property especially when Americans who own (vacation)property overseas like in Mexico are the worst landlords.

Are the immigrants the stupid ones who buy timeshares?

America is turning into a 'minority majority' country, deal with it people!

**China wouldn't be taking jobs away if we weren't so greedy and bought American!**

An illegal alien landlord put an American born tenant friend of mine and her children in danger of homelessness when he was trapped back in his own country after returning for a funeral. The American tenant paid her rent to relatives of the owner, no one paid the bank.

I am not a hater when it comes to immigrants, my own father was naturalized in 1947, but if you do not have a legal right to reside here, than logically you should not be extended a mortgage, since you are at an increased risk of default for reasons such as that given above.

Do minorities really need a leg up in the MTA? At least 90 percent of its workforce seems to be black! You can see them as they come onto a train 10 at a time, with all their bulky equiipment, taking up seating (is there any MTA rule against that? There should be), with their Mcdonalds bags of food, some even smoking, and carrying on profanity-spewn conversations at ear-shattering levells that would wake the dead!

Geez, this website has alot of people who hate minorities.
Translation: Anyone who doesn't agree with affirmative action and racial preferences is a "racist".

You can see them as they come onto a train 10 at a time, with all their bulky equiipment, taking up seating......
Be careful Anonymous, the other Anonymous above will call you a "Racist!!" for noting the obvious with your "lying eyes", and having the audacity to speak the truth!

MTA is less than 50% black, a majority work the bus operations

The "soft bigotry of low expectations" at play.

Is that supposed to be worse than your hard bigotry of white supremacy?

Look, the "self-fulfilling prophecy" is a widely understood concept. Sometimes when you start life down and out, it's a little hard to lift yourself up. Now you, Wade, born with a silver spoon in your mouth... I wouldn't expect you to understand.

Look, the "self-fulfilling prophecy" is a widely understood concept.Oh, really? How about providing some academic citations to support your thesis?

Sometimes when you start life down and out, it's a little hard to lift yourself up.
Yes, the United States is such a horrible country. Look what we've produced: Oprah Winfrey, Clarence Thomas, Barrack Obama, Tiger Woods, Neil deGrasse Tyson, etc. (I bet you have no clue who the last person is, without doing a net search!)

Now you, Wade, born with a silver spoon in your mouth... I wouldn't expect you to understand.
Silver spoon? Hardly. Life is not that difficult, as long as you: save more than you spend; get a job, any job; get married; don't have children until you get married; don't get arrested.

But I suppose for people with low IQs such as you, those must be difficult concepts to properly understand.

To be fair to the MTA, traditionally the city is a prime employer for the struggling newcomer or the poor.

That is why traditionally fire department jobs and police were Irish strongholds. The Irish took them when they were just underpaid, dangerous jobs and militant unionism turned them into jobs worth having.