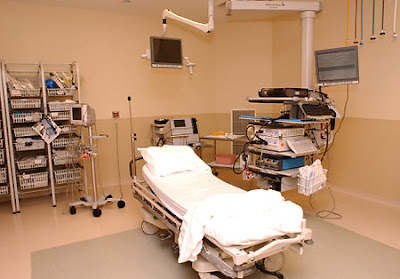 At Queens Hospital Center in Jamaica, they have so many people flooding their emergency room that they had to set up a tent to handle the overflow.

"We have been able to reduce from having approximately 140 patients, roughly about 50/50 in terms of children and adults to maybe about 20 patients now," said Queens Hospital Center Executive Director George Proctor.

Hospitals throughout Queens and other affected areas have been saying ER waits have been anywhere between two to six hours to see a doctor.

And from the Daily News:

A Queens hospital could soon be facing a strike by more than 700 of its registered nurses after a new round of contract talks hit an impasse, the Daily News has learned.

New York Hospital Queens in Flushing and 722 of its registered nurses returned to the bargaining table April 22, following a cooling-off period that elected officials brokered in February to avert a planned three-day strike.

But the latest round of talks appear to have broken off after a committee of nurses - whose contract expired Oct. 31 - walked out of a bargaining meeting Friday.

What great timing!
Posted by Queens Crapper at 12:24 AM

Get ready for the world economy. America must compete with slave labor from Red China and the wrecked peasantry of South America, Africa and a thousand other lands.

We thought this went out with Teddy Roosevelt, Franklin Roosevelt, the Square Deal, the New Deal, but its baack!!!

And it sure stinks!

This shows what a mistake it was to close 2 of the hospitals in Queens a few months ago. We are facing an emergency situation. I am writing to our elected officials to demand that these hospitals must be reopened at once! Just think what will happen when there is another natural disaster or terrorist attack.

You will never win because New York has been affected by madness. Why should the terrorists kills us, when we are doing such a good job ourselves.

Remember, Lenin, "The capitalists will sell us the rope we use to hang them," and

Krushchev, "We will bury you."

Since the communists are no longer around to kill us, we are doing their job for them.

I just found this video on You Tube that really shows how germs and viruses spread. It is so cool. It's meant for kids but I even learned a lot!

Krushchev was a pisser, the old geezer had guts !
"If you start throwing mud at me, I shall throw a couple of porcupines under you.”

Krushchev was also correct and predicted our current situation 40 years ago.
His rocket building blunders were spectacular

Moammar Kadafi also said "no need to destroy the United States, It will destroy itself.

We should probably close that hospital too and blame it on budget. After all, if there aren't centers to take care of the ill, we don't need to worry about finding jobs...