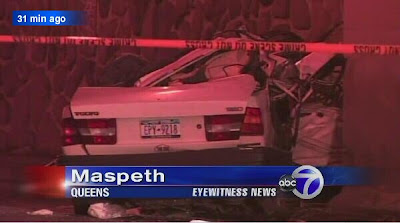 MASPETH (WABC) -- Three men were killed when a car careened into a concrete barrier in the Maspeth section of Queens.

The driver of the vehicle apparently lost control westbound on Laurel Hill Boulevard at around 10:30 p.m. last night.

The 1993 Volvo, which witnesses said was traveling at a high rate of speed, careened into a concrete barrier.

Eyewitness News is told the 26-year-old driver and his two passengers -- both 27-year-old men -- were all rushed to Elmhurst Hospital, where they were pronounced dead.

The cause of the crash is under investigation, but investigators said alcohol may have been a factor.
Posted by Queens Crapper at 9:26 AM

The way most people drive around ridgewood, maspeth, and middle village I'm not surprised.

sadly i have to cosign the above poster

The NYPD has got to change. Stop the quota for parking tickets,that's what Traffic Enforcement Agents are for.Start hsmmering out moving violations and have the Highway Patrol sent to different neighborhoods now and then.Use some of the overtime to on highway instead of the Crtical Response show in manhattan for the tourists!

Too many speeders out there...I agree that the highway patrol should be on local streets to enforce speed limits.

i don't know about you guys but i'm showing this picture to my 22 year old when he gets home. thank god he no longer has a car and uses transit. this is a very sad picture too young to die.