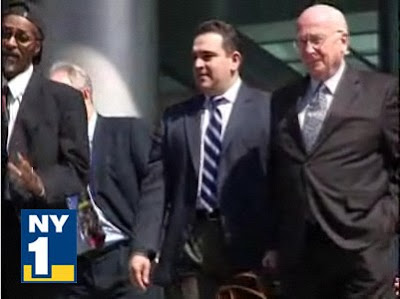 Lawyers for embattled state Sen. Hiram Monserrate want a Queens judge to quash his indictment for allegedly beating up a girlfriend because one of the grand jurors was a cop in the precinct that investigated him.

An officer in Jamaica's 105th Precinct who testified before the grand jury told Monserrate's lawyers he recognized one of his colleagues sitting in the jury box.

The officer, identified only as "Reefer," warned prosecutors about the potential conflict, but was "told not to worry about it," one of Monserrate's private investigators said in a sworn affidavit.

Last time a felony indictment against a Queens pol was challenged, it was dismissed by a judge and the DA accepted a plea deal and never refiled. Is this deja vu?
Posted by Queens Crapper at 10:04 AM

this shit was set up to let him walk. first the judge wouldn't allow the video tapes to be used, then the girlfriend (insult to all women) won't testify against him and now the prosecutors allowed an officer to be on the jury. come on this is all bull shit. hope someone kicks this guys ass when he gets out.

first the judge wouldn't allow the video tapes to be used

not true. the judge wouldn't release them to the public, saying that they were too prejudicial and would not allow him a fair trial, when they are sure to be entered into evidence. please don't disseminate 1/2 truths.

possible i read it wrong can you forward me the article? thought i read we not be allowed......

If this were the actual trial he would have a legal leg to stand on. But the Grand Jury proceeding is a different procedure altogether, requiring a much lower standard of proof than a trial. The actual trial which determines guilt or innocence requires a jury to convict beyond any reasonable doubt, whereas a Grand Jury simply determines if there is enough evidence for an indictment, and to proceed to the next step towards trial.

The D.A must rescind the plea offer.

The officer didn't sneak onto the grand jury.

Several years ago the law was changed to require all citizens to serve on juries, regardless of occupation, lawyer, elected official, celebrity, etc.

Nothing devious occurred for this turd to use to avoid trial.

You wouldn't make a good lawyer. In this case, the DA has video proof - a home run. In the other case, it was he said/she said - a much weaker case.

His "lead ivestigator" is another loser ex-cop who was fired by the NYPD
----------------------------------
Fired NYPD Sgt Charlie Castro, who likes to throw whatever weight he has around Jackson Heights/Elmhurst. He likes to call the local precincts and identify himself either as an NYPD Sgt or a retired Sgt, when in reality he was fired. Every now and again, he gets a senior cop on the phone who remembers who he was, and the senior cop stops him dead in his tracks. This loser couldn't find a collar in a shirt factory when he was a cop.

Birds of a feather flock together. Also crazy Mr. "Monster-Rat" tried to have me and two neighbors committed to a nuthouse because we refused to let our landlord push us out of stabilized and controlled apartments where we had lived for years.

I can't wait for him to go to jail. My landlord next with the help of God.