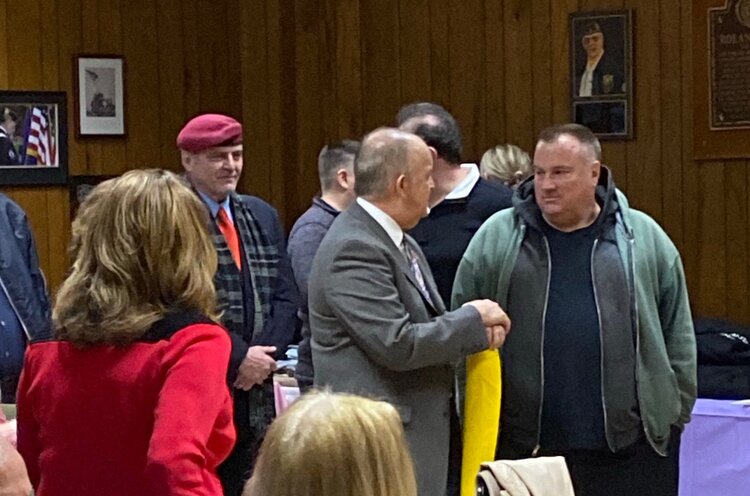 New York City’s self described “Guardian” put others at risk Wednesday when he went maskless at a crowded indoor Republican club rally in Queens.

Photos shared by an event attendee show GOP mayoral candidate Curtis Sliwa, the founder of the Guardian Angels vigilante group, without a mask inside a crowded American Legion post during an event hosted by the Whitestone Republican Club — an organization with a history of flouting COVID restrictions. Republican Queens Borough President candidate William Kregler and Council District 19 candidate Vickie Paladino, the club’s president, are also seen without masks inside the hall.

One photo shows Kregler talking with Charles Vavruska, an aide to Councilmember Robert Holden, while Sliwa stands behind them. None wore masks in the photo. Other pictures show the majority of attendees sans mask inside the crowded wood-paneled room.

“I didn’t feel comfortable with that … it was practically completely maskless,” said the photographer, who asked to remain anonymous for fear of retaliation. “I’m a Republican. I voted for Donald Trump twice [but] I don’t want to get COVID.”

They said at least 50 people were present at the event.

Current state rules restrict non-essential indoor gatherings to 50 people or less until March 22 and mandate that people wear masks when unable to remain six feet apart from others.

Sliwa said ditching the mask was a mistake, though he said he did cover his face at others parts of the night.

“I probably should have worn the mask more,” he said. “Upon second thought, more masks should have been worn.”

Its been a year now. Enough with the masks. I stopped wearing them too.

"Guardian Angels are a vigilante group" What ?
So BLM can kill and cause damage with impunity ? How ironic that the people who think they're "woke" are actually the most asleep, like sleepwalkers.
You need to wake up young men/women and start realizing the truth instead of going back to lefty wonderland !

The fawning over Joe Biden is sickening.

C'mon man, cut the malarekey. If you proles are good, I might, might just let you have a few friends in the backyard to celebrate the, you know the thing on the 4th of July.

Non issue. apparently neither the masks or the vaccines are not preventing anything.

However the bigger issue is what is going on in NYC and NYS.

We can all agree with how Cuomo and de Blasio Ruined New York.

Masks are cheap. We don't know for sure how well they work, but they're an easy fix if they do work. What's the big deal? Wear a mask in public events and around people. Just like the "shots", we don't know if it works either, or for how long, but they seem to be popular. Nevertheless, still wear a mask, keep social distancing and wash your hands with soap. Grow up!

Yes, but they also spent 5 minutes discussing a future partnership with Black Lives Matter (Praise Be Upon Them), and we all know that if you are protesting/discussing BLM related issues, the risk of COVID is 0%.

The Demorats are pimping you, Wake up!
If you read the new Smithsonian chart “hard work” is not an option.

Old Joe Stays Up Past His Bedtime last night.
He said Celebrating independence day will be an option ?
Nothing says “celebrating freedom” quite like “maybe if you’re good, you can have a small gathering in your own home.”

One of the opening stories on CBS2 @ Noon was the Reopening Festivities in Times Square. Why not criticize that as well?

Yep. You should grow up. Who, where and when isolated the scary virus?

Just asking. Feel free to put a plastic bag over your head, they are safer.

More worrisome should be the fact that these Banana Republicans aren't likely to do anything to loosen the Commiecrat grip of death on NYC-they'll either do nothing or collaborate with them as usual.

No mask for the hordes of illegal migrants being smuggled into Texas !

When this plague is over, I just might continue to wear a mask. I like the anonymity of it all plus you never know what new bug is coming down the pike.

If you can breathe in and exhale through your Fauci face mask the Covid virus can get in and out too! Enjoy the jab.

Well, look at them...stupid as bricks. Exactly what I see in -some- of the neighborhoods in the outer boroughs.

Take a look at the charts at Gothamist/WNYC and you'll find the expected higher infection rates.

No cure for stupid, but time & The Reaper are on our side.

The best article I read recently was in the post where the government tells granny that she can't see her grandchildren but meanwhile they ALLOW illegals to cross over the border everyday with no covid screenings at all. But just as long as grandma doesn't travel, we are all safe. Give me a break! So sick of this crap. Hypocrits in politics.

Stop drinking the cool aid. Doesn't work for you pal.

Do you people really think masks work after all this time when there's absolutely no difference in infections in states that wore masks vs. states that didn't? Do you know why Queens' infection rate was high? Because we have like 10 people to an apartment in Corona, Richmond Hill, etc. Manhattan emptied out and there are a lot of wealthy people living there and along the Brooklyn/LIC waterfront where the rates are lower. It's four months after the original Whitestone party and it wasn't in any way a superspreader event. Enough with the media's panic fuel nonsense.

I just loath wood-panelling. What kind of a design moron decorates with this these days? Are there also ashtrays and beer coasters strewn about the room? Linoleum on the floor?

Whitestone continues to appease to trash

Yes because we are all deplorable Neanderthals in the outer boroughs.
I get it, you think where you live makes you smart.
Please stay in the City and keep wearing your 2X Fauci Diaper !
Well golly if we hicks new better we would know a micro assault isn't when a midget punches you in the balls.

Comrade said...
@Rob "Stop drinking the cool aid. Doesn't work for you pal."
He is too far gone he will never wake up !
Hell I bet Rob is so woke he could be mad about being born white.

@Rob Showing us the intolerant left continues on !

@Bored thought you would be in Portland with the mostly peaceful folks !
Mommy didn't let/Pay your way ?

Back on the meds Bored ?

Its a pleasure to charge people like Bored and Rob $125 an hour to patch their drywall or fix a sink. Most City Slickers are useless brainwashed fools !

A speakeasy party in Tribeca was raided by city sheriffs a week or two ago.

A lot of people who live 10 to an apartment in Corona, Richmond Hill work in the city and in the riverfront areas of Brooklyn and Queens doing food deliveries and cleaning up hospitals and hospice care homes. Just possible they may have got it from rich folks ordering ramen and salads then brought it back home.

Actually CNN paid for the footage provided by the Antifa boy. Nice try you little fascist.

Bored - is this what you represent?

Thank you JQ !
@Rob still thinks like Back in the day, if you got offended first you lost.

Rob is a lying dogfaced pony soldier. Come on man!

Alex Jonnes said...
@Rob in Manhattan said...
"Well, look at them...stupid as bricks"
Well Lookie here Robbie Over a week now since I identified as fully vaxed and still not one side effect.

I identified as fully vaxed and still not one side effect.

Marvin Hagler disagrees with you.

"I identified as fully vaxed and still not one side effect"
It's like Tom Selleck telling old people that a reverse mortgage isn't some trick to take your home..

The FAT guy in the pic is doomed if he gets it.