Chuck Schumer grovels to Jet Blue to remain in Queens 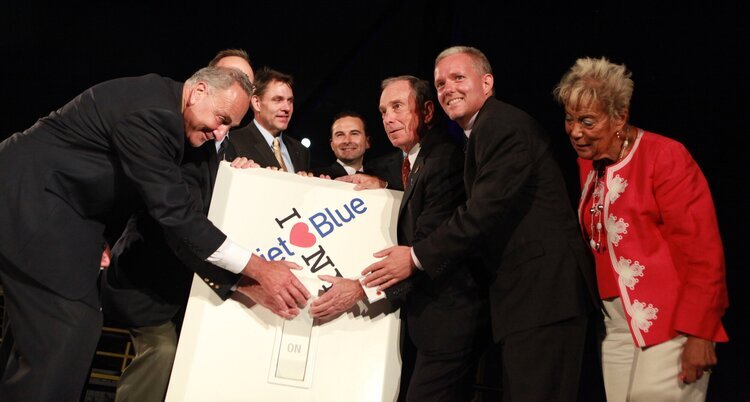 One of the nation’s most powerful lawmakers has joined the effort to keep JetBlue in Queens.

Schumer said he reminded Hayes of the airline’s roots in Queens, where JetBlue has remained since its founding 1998. He also said he and fellow New York leaders worked hard to secure  $14 billion for the airline industry in the $1.9 trillion stimulus package passed this month.

“With the critical pandemic relief dollars we just delivered on to help save airlines like JetBlue, and the thousands and thousands of New Yorkers they already employ, the airline should actually clear the runway to grow here, not recede,” Schumer said. “Bottom line, I am confident JetBlue will remain New York’s hometown airline for a long time to come.”

The airline has 1,300 employees who report to the Long Island City space and thousands more reporting to Queens’ two international airports

JetBlue, the seventh largest carrier in North America, started in Kew Gardens before moving to Long Island City in 2010. The company received a slew of incentives from New York City and state at the time, fueling speculation that the leaked memo was the start of a new attempt to extract concessions from a city eager to keep the company in Queens.

The airline has also contended with huge losses as a result of the COVID-19 pandemic. In the second quarter of 2020, for example, the company reported a nearly 90 percent loss of revenue as air travel ground to a near halt. Revenue decreased by 76 percent in the third quarter of 2020 and 67 percent in the fourth quarter.

In a statement to the Eagle, JetBlue did not rule out fleeing Queens when their lease expires. The company said they “expect to have a plan in place later this year.”

Move people it's not getting better !

I'm an old white man and I'm tired of people blaming me for what Joe Biden does.

Chuck Schumer is the best !

In other news, companies are looking to get out of NYC, and are glad their leases are up soon.

I don't blame Jet Blue for leaving. The politicians in this city and state don't support our businesses. They only support criminals and illegals.

As someone with no money, I object to this brilliant idea.

The streets are not safe !
Who in their right mind wants to live and work in NYC if you have a choice ?

Chuck Schumer should be groveling in front of the Tax Payers, and begging for forgiveness on how he has constantly screwed them over with his life of "service"

Dandy Andy Cuomo, the whole state legislature, Bill Debozo and the whole city council should all be named realtor of the year in FL,NC,TX and a lot of other states. They've made more companies and people move out of the state and city then anyone else.
Jetblue and any other company would be crazy to stay in this cesspool.

Most NYC people love this Crap !

The whole city council needs to be voted out !

"Chuck Schumer is the best"
At helping the lobbyists and the special interests groups.