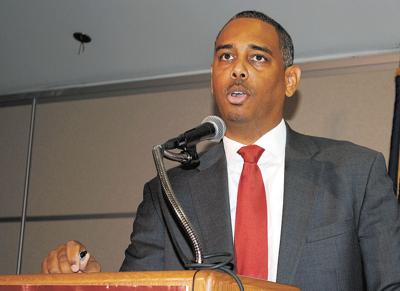 Ruben Wills, the former city councilman in District 28 who was convicted of multiple counts of fraud and grand larceny, filed this past weekend with the city Campaign Finance Board to run against Councilwoman Adrienne Adams (D-Jamaica).

Wills, who was elected in 2010, went to prison in 2017 after a jury found that he was guilty of using over tens of thousands of dollars of government funds to buy personal items.

Though the City Council recently passed a law that would disqualify any person who has been convicted of certain felonies involving public corruption from running for City Council, Gothamist first reported that the law is unlikely to apply to Wills’ case after an appeals court reversed his conviction.

The court found that Wills was “deprived of his ‘right to present evidence by witnesses of [his] own choosing [which] is a fundamental ingredient of due process.’”

Gothamist reported that Attorney General Letitia James has not decided yet whether to retry the case, but Wills’ lawyer, Kevin O’Donnell, opined to the website that it would not be worth spending public funds on a second trial, when Wills has already served a two-year sentence.

Wills, who did not return multiple attempts by the Chronicle to get in touch for this article, told Gothamist that his experience in prison has got him to think about a set of criminal justice policy reforms.

So far Adams has raised about $40,000 in funds for her re-election campaign.

Two other candidates have recently filed with the CFB to challenge her for the seat.

A look at Wills’ social media pages suggests that his drive to return to public office never left him during his imprisonment. Wills never updated his official Facebook or Twitter pages to reflect the fact that he no longer held his Council seat.

“I am the Councilman representing the New York City Council’s 28th District, covering the Richmond Hill, Rochdale, South Ozone, and Jamaica sections of Queens,” reads the bio on his Twitter page that he regularly posts to.

To quote George Costanza "It's not a lie if you believe it". Makes a lot of sense why Cuomo is going to ride his term out and run again despite all of his scandals.

And the suckers will vote for him again...

His conviction was overturned so he is innocent run baby run,,

130k a year job with bennies right out of jail!

Vote Blue no matter who ! Anyone surprised?
Dems told me if I voted for them I’d get a living wage and 2k check !

What else should I do Nance ?

Alas, mental slavery is the worst form of slavery. It gives one the illusion of freedom, makes one trust, love and defend one's oppressor, while making an enemy of those whom are trying to free you, and to open your eyes!

❝Voting is not an act of political freedom. It is an act of political conformity. Those who refuse to vote are not expressing silence. They are screaming in the politician's ear: 'You do not represent me. This is not a process in which my voice matters. I do not believe you.'❞ ――Wendy McElroy

❝The political system, as many Bernie Sanders supporters are about to discover, is immune to reform. The only effective resistance will be achieved through acts of sustained, mass civil disobedience. the Democrats, like the Republicans, have no intention of halting the assault on our civil liberties, the expansion of imperial wars, the coddling of Wall Street, the destruction of the ecosystem by the fossil fuel industry and the impoverishment of workers. As long as the Democrats and the Republicans remain in power, we are doomed.❞ ――Chris Hedges

Democracy now only resides in a corporate boardroom. Most people with whom I interact are in deep denial. People sanctify the state as long as their puppet of choice is in power――which isn't a choice at all: It's the 'Illusion of Choice.'

❝Voting gives consent to profound, political criminals to continue to fleece all of you politically indoctrinated 'SHEEPLE' like human cattle——ALL the way to the golden gates of the abattoir. You DO NOT have to be livestock for criminals and archaic, party-machine-failed cults AND Mafia crime family rings. Nobody ever CHANGED the MAFIA——by JOINING IT!❞ ——Anonymous

You can not argue with slaves who don’t even acknowledge their shackles!