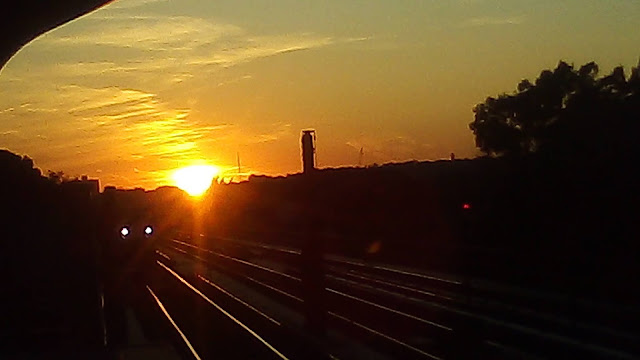 On Sunday, the first car of a J train completely overshot the elevated station.

It was the second J train to do so that day.

It’s very serious," Aaron Morrison, a train operator and union representative. "And for it to have it happen twice in a day with that equipment, it’s not uncommon."

Morrison has driven every type of subway car on the MTA's lettered lines, including its latest model, the R179s, which have run on the A, C, and J lines for two years.

"The train has a serious braking issue," Morrison said. "Even on dry rail, on a sunny day, depending on the geography of the station that train can go out of the station at any time."

It was raining Sunday when the operator of a train heading toward Manhattan applied the brakes, entering the 121st Street station in Richmond Hill.

The train skidded on the rails, stopping only after the first car and half of the second shot past the platform.

A half hour earlier, a J train heading in the opposite direction skidded after the operator braked entering the 111th Street stop.

The MTA says both trains were inspected and no defects were found. It blames the operators.

"Station overruns happen on all car classes and are usually the result of operator input and any train operators with concerns should raise them immediately," MTA spokesman Shams Tarek said.

But Morrison says the R-179s are so troublesome, operators try to avoid them when choosing assignments.

"They have a troubled history," transit advocate Andrew Albert said.

Albert has watched the R179's troubled history unfold from his seat on the  MTA board.

The cars were delivered late from manufacturer and have had welding problems and door malfunctions. One time, two train cars separated. The fleet has been pulled from service twice.

The cars have a worse performance record than some models built more than 30 years ago.

At least we don't pay high taxes for this shitty infrastructure!

A friend of mine is a tech at the Coney Island yards, I asked him.
Response: Anybody who speaks an opinion or unofficial comment will be fired.
All the motormen and service people hate these, too many dangerous flaws to be operated in NYCs systems where stations so close and short hops. The systems in the Bombardier R179 overheat and start to slow down, lose response, door motors & brake shoes burn from being cycled so frequently. Dynaamic braking is also wrong for NYCs layout of with most stops being less then a mile apart.
Canadian built French pieces of falling apart shit that should never been purchased.
High tech "Fly by wire" my ass, the operator hand levers & joystick tell the computer what to do, then that computer decides how to do it. The latency and response is so bad the motorman has no mechanical hand or foot feedback or say over what the lousy computer is doing.
The operator must then perform a number of tasks and throw switches to wrestle the computer away from the train. (then it to late)
This may be fine in France and Canada where stops are miles apart, easy to compute under 1 degree flat grades and wide curves but F_ hell this can not work here!! NYCs system is all different grades and curves based on a 18th century cut and cover system. Only a well trained human who knows the route can respond to all the calculations safely not some "do all" cyber middleman.
This was New York City subway chief Andy Byfords work and kickbacks to Bombardier Canada (French designed crap).

Need break out the blueprints for the Redbirds and put them back these new trains are garbage and to small.

Moe said...
Thanks for the detailed info Joe !

Seems a little ridiculous to be complaining about French or Canadian designed stuff when the USA doesn’t even have a manufacturer. If our infrastructure is so different from everywhere else, where are we supposed to buy trains?

To Ryan N: If our infrastructure is so different from everywhere else, where are we supposed to buy trains?

From CHINA, of course!

""where are we supposed to buy trains""

$28,000 + EUs commie VAT Tax's for 16 imported made in France "green technology" hemp epoxy Bombardier brake shoes (per car) needing replacement every month?
Brake Shoes for a Kawasaki R-160 (Metallic heat resistant re-linable) cost $600 to rebuild right here, you pull the pins, bogy shims and done in 15 minutes. Good for a year or 100,000 miles. And the trains stop where you want them.

2:Kawasaki Heavy Industries is right here in Yonkers, NY
They have all the parts, and can fabricate, rebuild, upgrade anything right here employing OUR PEOPLE !!
The city need to get these corrupted stupid jackass monkeys in suits (who know nothing about trains, machinery and electronics) making the decisions out of the picture.
The French cant even build automobiles right, look at Renault and Bombardiers service and fault records.

Oh my god how New Yorkers from the Governor down have become so stupid its mind-blowing!

You got that right !
One needs a gun & hazmat suit to ride, the bums and crazy people pee & defecate on the floors, seats pee in bottles that roll around till breaking.
Many have lice, paranoia sickness, they will start fight with you, knife & push you on the tracks just for looking at them !!
Stop And Frisk should at least be allowed on MTA property, fuck these savages so called "Squatters Rights" liberals preach. Nowhere in the world do squatters have rights to live & shit in transit systems. Not even in Russia and China, they lock them up (or firing squad if they hurt somebody) Solved, End of problem.

China?
They still use a blend of coal, wood, crude oil, waste oil & steam and, you will shit you pants how hard they run them. Set the sky on fire like fireworks !!
Shocking https://www.youtube.com/watch?v=Ampco2JqSc8

Nobody's worried that if these trains overshoot at these elevated stations that one or more passengers or folks down below could die?

Turn the train yards into HOMELESS SHELTERS all you need is outhouses and showers,some are even heated,talk about packing them in like sardines they all ready smell like them.