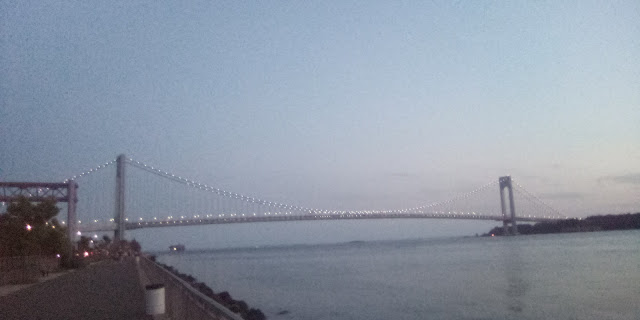 As COVID-wary Brooklynites take up biking en masse to avoid crowded public transportation, a cadre of New York State legislators are looking to open the Verrazzano Bridge and other city spans to pedal-pushers — including by introducing legislation in Albany that would push the Metropolitan Transportation Authority to create cycling spaces on bridges overseen by the state agency.

“Despite the rapid growth of bicycling in New York City over the last decade, the MTA has done little to improve bicycle access at its stations and prohibits cycling on its bridges altogether,” said Bronx state Sen. Alessandra Biaggi in a Monday statement. “As more New Yorkers have turned to cycling and outdoor spaces throughout the pandemic, we must continue to make our communities welcoming to cyclists and pedestrians and encourage residents to use clean forms of transportation.”

The bill, which was simultaneously introduced in the state’s lower chamber by Queens Assemblymember Jessica González-Rojas, would create an advisory committee within the MTA tasked with drawing up a plan for better bike and pedestrian access on the agency’s bridges and public transportation stations.

The potential 13-member panel would be appointed by the governor and legislative leaders, and would also weigh in on the Authority’s capital projects and capital planning.

One southern Brooklyn bike advocate hailed the move as an important first step in getting transit honchos to the table, after years of MTA bigs resisting bike access on the agency’s overpasses.

“For Brooklynites looking to bike over the Verrazzano to Staten Island or the Marine Parkway Bridge to the Rockaways, MTA leadership has been more than indifferent — they’ve been aggressively hostile, using arbitrary and false safety claims to obscure their own failures and last-place status,” said Brian Hedden, a co-founder of the advocacy group Bike South Brooklyn. “This bill will be an important first step in catching the MTA up with its peers, and ending the leadership’s pointless obstruction.”

The organization has lobbied the MTA since 2019 to close one of the Verrazzano Bridge’s 13 car lanes and turn it into a cycling and pedestrian path.

Hey, if they want a lane for bikes fine with me. As long as they pay the toll like everyone else has to.

Let's get ready for the Queens Crap Bike Lover Choir !

On taxpayer dime of course.

Those dam bike riders are Trump supporters with Russian bikes. Ban them !

This is nothing short of a bike insurrection !
Imagine voting for Biden thinking that this would stop.

yeah that's a great idea, because what could go wrong right?

Trek Rider is singing in the Bike Choir

I have 3 bikes, so by no means I'm a bike hater. They are regular, normal bikes.

Not the kind you people are talking about, e-bikes with electric motors at no license plates.

Want to pedal? Go for it. I do it. Is good for you. E-bikes on the other hand are super dangerous and their users should be paying taxes and be licensed.
Labeling folks will not change the facts.

Look, Mr. Elitist. Most of us have (a) too far to travel, (b) too little time, (c) experience too much bad weather, (d) have any number of physical limitations, (e) can't show up at work needing a shower, and (f) DON'T WANT TO RIDE A BICYCLE. So stop shoving it down our throats.

Bike Lives Matter ! #BLM
Multiple Micro assaults on my bike riding choice will not be allowed.

Dik Twist said...
The insurrection against bike riders must stop !

Anonymous @Liman said...
Park your fat ass in your Mom SUV and pay the toll !

I say put bike lanes on all the bridges as long as you make them free for everybody. Revenue loss. What revenue loss. Sleepy senile Joe will send a shitload of free money
to bail out the MTA. I think sleepy Joe is printing money in the basement of the White House.
EVER THING SHOULD BE FOR FREE.

I think sleepy Joe is printing money in the basement of the White House.

Who? The First Vegetable? He can't even handle his own dog man.

Imagine they built bridges years ago without thinking of pedestrians and bicyclist. I'd love to walk or bike over that bridge look at that view.I've done the 5 Boro Ride a few times and with the wind it's a real challenge.
Signs on Cross Bay Bridge to Rockaway says to walk bike over bridge in pedestrian path.Same with Gil Hodges Bridge.I have never seen anyone do it,myself included and it is dangerous to do it .The Crossbay Bridge was redesigned not too many years ago and you think they would have made it a few feet wider to accommodate bikes, but no.

These fools are not talking about traditional bikes.

No riding on the sidewalks either.

Park your fat ass in your Mom SUV and pay the toll !

You must have kissed that ass a few times, seems you know the size.

You know the thing said...
Come on man, Want to do push ups FAT ?

Those damn car people...
Such a nice women !
https://nypost.com/2021/03/15/tennessee-woman-nika-holbert-killed-in-shootout-with-cop/