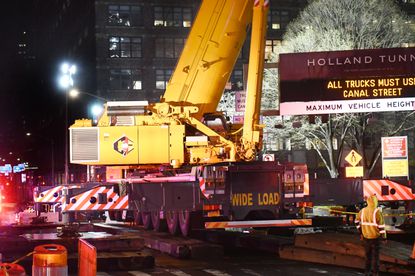 A crane operator fined $10,000 for using his cellphone while hoisting steel on a Bronx job site is also under investigation for his role in the death of a Manhattan construction worker in 2019, the Daily News has learned.

Michael Chichester was fined the $10,000 in January for the Bronx violation — as investigators continue to examine his role in the gruesome death of hardhat Gregory Echeverria during the construction of a luxury building at 570 Broome St. in SoHo on April 13, 2019.

“Mr. Chichester was one of the parties involved in the 2019 fatal crane incident,” Buildings Department spokesman Andrew Rudansky said Tuesday. “That incident is still under investigation by the Department of Buildings and our partners in law enforcement. Further enforcement actions related to that incident are pending the conclusion of that joint investigation.”

Sources familiar with the probe say Chichester was fiddling with his phone the day that Echeverria, 34, died.

When reached by The News Tuesday, Chichester initially denied being himself, referring to himself in the third person instead. “What kind of story do you think you’re doing?” he asked.

“It was a tragic accident,” he eventually said of the SoHo death before hanging up. “I went through all the investigation. I’m a crane operator. I’ve been a crane operator for a long time. If I look away it’s on me, but I follow my signal guy. A tragic accident happened. You’re making a mountain out a molehill.”

The tragic sequence that led to Echeverria’s death began as a team of workers were assembling a mobile crane to lift mechanical equipment to the the roof of the Broome St. job, officials said.

A second crane was lifting counterweights into place to stabilize the mobile crane. After putting one counterweight on the back of the crane using two of the three ropes attached to the hook, the crane operator, believed to be Chichester, lifted the ropes away from the weight.

But the third rope caught the lifting attachment - known as a lug - and ripped the counterweight off the crane and into the air. Counterweights can run from 8 to 16.5 tons each.

“The man was split in half,” a distraught co-worker told the Daily News at the time.

In August 2019, city officials suspended work at job sites where work was being done by United Crane and Rigging, a firm linked to the Broome St. death and to an incident on the FDR Drive where an overloaded crane toppled. The company was slapped with $11,000 in fines amid the pending probe.

One of those job sites was for an affordable luxury public housing building.