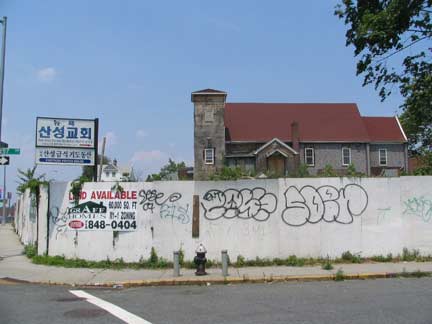 More than two years after the investor and developer was indicted for participating in a mortgage fraud scheme, the industry players Dafna borrowed money from are coming out of the woodwork to recover funds they claim they’re owed.

Two of Dafna’s creditors filed a petition for his involuntary Chapter 7 bankruptcy last week, citing $1.3 million in claims, court records show. But that number could balloon to more than $20 million if the parties behind numerous lawsuits and outstanding judgments against Dafna become creditors.

The case against Dafna and his co-defendants is ongoing. Each man faces a $1 million fine and up to 30 years in prison if convicted.

In the meantime, private lenders are coming after Dafna to recoup funds they say he never repaid.

For those who don't recognize the name, Tomer Dafna was a co-owner of the St. Saviour's property in Maspeth. Karma is not always instant but it is most certainly a bitch, ain't it?
Posted by Queens Crapper at 7:26 AM

A real failure of the Borough of Queens, widely touted as being USA of the next century.

That's what stupid voters get for rewarding asshole democrats & Crowleys with re-election. This was a dirty back handed deal from day one.
Hope voters learned something however I doubt this.

"Hope voters learned something" NeVeR GoInG tO HaPPeN !
In NYC and other large deep blue cities the voters want this.
They voted for this Crap over and over for decades.

"Likely" headed to prison. Right! Let us know when that happens! In NYC? C'mon!