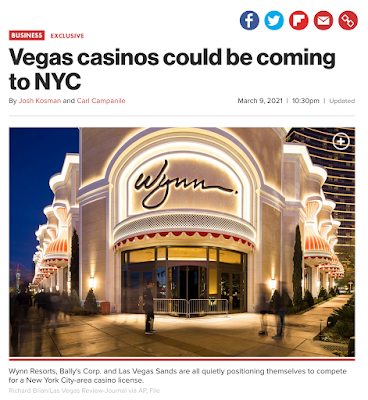 Well, well, well. For years, we've been covering "rumors" that the Willets Point boondoggle will result in a casino.

Now, according to today's NY Post, it's no longer a rumor.

Three large casino companies are jockeying over a rare opportunity to bring a piece of the Las Vegas Strip to the Big Apple, The Post has learned.

Wynn Resorts, Bally’s Corp. and Las Vegas Sands are all quietly positioning themselves to compete for a New York City-area casino license in anticipation of Albany putting out a request for proposals as soon as next month, sources told The Post.

Locations being scouted include Willets Point in Queens, where new Mets owner Steve Cohen leases the Citi Field ballpark and adjoining parking lots; the Belmont Park development in Long Island, which is already home to the Belmont Park racetrack and the Islanders stadium; and Staten Island’s St. George neighborhood — home to both the Staten Island Ferry and the New York Wheel, a proposed 630-foot Ferris wheel to be located next to the Empire Outlets retail complex.

So which pols have been lobbied?
Posted by Queens Crapper at 10:07 AM

Perfect place for losers to blow their stimulus checks.

Well, why not...the mafia has long had it's grip on that wasteland.

Why anyone would go to those places is beyond me.

I totally agree with you Rob on this issue :)

"I totally agree with you Rob on this issue :)"
Even a broken clock is right twice a day !

Another reductive gambling mill - exactly what QUEENS County and New York City DOESN'T need. Gambling is regressive and cannibalistic: Regressive, because once the money runs out (and, it always does), then the strapped and desperate look to siphon from their rent money, car payments and other finite sources of security. Then, when things really get bad, it's full blown cannibalism time, as they beg, borrow and steal their way into a cycle of addiction that ends up destroing not only the gambler, but the gambler's friends and family as well - to ruinous effect!

Also, I've seen the repressed types who enter the Racino for a chance to walk out with a windfall, and they all look like they can't afford to gamble in the first place. Worse, all of their games are electronic, thereby eliminating the possibility of tightening the odds by a table game dealer or croupier. A 'lose-lose' scene like nothing else!