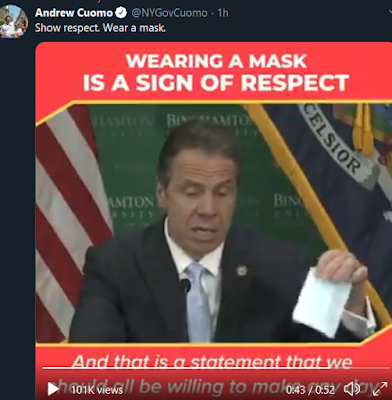 The first charge of a state governor should be to keep as many of their constituents alive as possible, especially during times of crisis. In collusion with a fawning news media (which includes his own brother, CNN anchor Chris Cuomo), Governor Andrew Cuomo of New York has failed to do this.

Indeed, the COVID pandemic has proven that he does not respect nor perhaps even understand scientific knowledge enough to avoid needlessly letting thousands of New Yorkers die—and he should resign immediately.

It was strange to me when sycophants in the press nicknamed Cuomo “America’s Governor” last year. (Then again, the press dubbed Rudy Giuliani “America’s Mayor” after 9/11, even as he tried to subvert election law, and look at how that hagiography has held up over time.) In March 2020, after the toll of COVID in Wuhan, China and Lombardi, Italy were well-known, New York City Mayor Bill de Blasio wanted a shelter-in-place order within 48 hours. But Cuomo dismissively said, “It cannot happen legally. No city in the state can quarantine itself without state approval and I have no interest whatsoever and no plan whatsoever to quarantine any city.” Even though the well-known science of locking down had been essential in flattening the curves of Wuhan and trying to do so in Lombardi, Cuomo derisively said such measures would be “counterproductive” and that there wouldn’t be any “‘You must stay in your house,’ rule.’” (Cuomo delayed the lockdown so he can brand it-JQ)

Cuomo did eventually lock down New York State, of course. But if he’d made the decision to do so a week earlier when de Blasio wanted, researchers modeled in May 2020 that perhaps 17,000 fewer people in the New York metropolitan area would have died.

That’s right: 17,000 fewer people (about six 9/11s’ worth) could have died, if he’d looked to science at the time. That was just one of many decisions Governor Cuomo made before the pandemic and in its first few months that resulted in the needless deaths of New Yorkers he was sworn to protect. And if his unscientific calls weren’t predicted by protesters backed up by years of established research, research after the fact showed a fundamental and lethal dereliction of his duty.

First, long before anyone heard of SARS-CoV-2, New York State cut almost 20,000 hospital beds over the past two decades. Cuomo has been governor for half of that time. A big reason why there was such a shortage of beds when he was on TV every day, wringing his hands about not having enough ventilators was because he oversaw the decimation of the state’s hospitals and stripped the system so close to the bone, it predictably couldn’t handle a pandemic.

Yet Cuomo chose to contract Medicaid during a pandemic. As Jason Rosenberg of ACT UP—which protested Cuomo’s budget remotely before it passed in 2020 and protested it in-person recently—put it to me, “Cuomo's proposals to cut Medicaid and the 340B drug pricing program by the billions set the stage for how the state would respond to a public health crisis. And who was to be disproportionately affected? Community health centers who need this state funding to survive are at the core of assisting vulnerable populations with affirming care and health needs. To threaten this funding so early in the COVID-19 pandemic was to discount their lives.”

At the same time as it was unscientifically slashing the Medicaid budget in a pandemic, the Cuomo administration was making a disastrous and lethal decision: to send patients recovering from COVID-19 to nursing homes, which did not have the proper staff, ventilation, PPE or physical facilities to protect either their patients—the most vulnerable population at-risk for COVID death—nor their workforce largely made of women of color, many living in tight quarters with other highly vulnerable people. (Cuomo couldn’t send people to hospital beds he’d long ago closed, and it was hard for him to operate costly field hospitals since he vowed not to tax billionaires.)

The totally predictable result? Initially, the New York Times reported that some 6,200 people had died of COVID in New York’s nursing homes, which was already a high number. (These included one person very dear to me, ex–Village Voice editor Ward Harkavy.) Pro Publica reported in June 2020 that the three states that illogically sent patients recovering from COVID into nursing homes—New York, Michigan and New Jersey—had severely higher numbers of nursing home deaths.

But that already-too-high 6,200 number was lowballed. In January, New York State Attorney General Letitia James accused the Cuomo administration of purposely undercounting the nursing home dead, which was about double (12,743) what the administration had initially reported. Shortly thereafter, New York Assemblyman Ron T. Kim, chair of the Assembly’s Committee on Aging, accused Cuomo of calling his home threatening to “destroy” him for speaking critically on the matter. As Kim explained in a March 3 appearance on Democracy Now!, in addition to “deliberately withholding data,” Cuomo also “prioritized the interests of his top corporate donors, including the hospital lobbyist, the nursing lobbyist, over saving lives.” He did this by granting “an immunity from criminal prosecution at the peak of the pandemic.”

The result wasn’t local or Democratic, but national and bipartisan. As Kim said, the nursing home “industry released a press release immediately after it was passed by the governor, bragging that they wrote and put it in the budget” before then–Senate Majority leader “Mitch McConnell literally took word for word and tried to put it into the Washington stimulus package.”

Now, just this week, there is another COVID scandal brewing in the Empire State. While the Biden administration has released another 11 million doses of COVID vaccines explicitly for vulnerable populations—including farmworkers—New York State has inexplicably and inexcusably removed farmworkers from eligibility.

Again, the Cuomo administration has shown it doesn’t understand or respect science. And yet, despite all of this state-manufactured death, Andrew “America’s Governor” Cuomo has been lionized in the press, again and again. Despite presiding over the state with the most COVID deaths at the time, he was commissioned to write American Crisis: Leadership Lessons from the COVID-19 Pandemic, which became a New York Times bestseller. Some liberal women and gay men dubbed themselves “Cuomosexuals,” needlessly and tackily conflating political and sexual desire. And the Television Academy even gave him a special COVID Emmy for “his masterful use of television to inform and calm people around the world.” His use of PowerPoint presentations seemed to mesmerize people. But as Shannon Mattern wrote in Art in America, that format has less to do with competence and more to do with projecting “the aesthetics of authority.”

“I did not have sexual relations with that woman”. Opps right quote wrong Democrat.

I don't understand why the Socialist Communists are turning on him...he's one of them....how rude!..lol

- "Greet" the Governor? Of course.

we shoulda just gone to the Chinese New Years Day parade as Deblasio instucted New Yorkers to do.