Cuomo's COVID tyranny is about to end 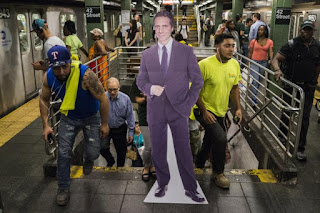 New York legislative leaders announced an agreement Tuesday to curb pandemic-related emergency powers granted to Governor Andrew Cuomo last year, in the latest blow to his tenure amid growing calls for him to resign over dual scandals.

The legislature will likely act on the bill as soon as Friday, Democratic Assemblywoman Carrie Woerner said Tuesday in a Twitter post. The measure would repeal the extraordinary powers they gave Cuomo at the start of the coronavirus pandemic, limiting his directives to those “necessary to reduce the spread or increase vaccinations.” On a broader level, it would require the governor to provide online reporting on all executive orders, increasing transparency, Woerner wrote.

Cuomo, 63, a third-term Democrat, is facing investigations over accusations from three women of inappropriate behavior, and questions over whether his administration purposely concealed data on Covid-19 deaths of nursing-home residents. Several Democratic lawmakers have called on the governor to step down, while others have suggested impeachment.

A call to his office for comment on the agreement wasn’t returned.

Cuomo to Be Stripped of Pandemic Emergency Powers in Legislative Deal

"The changes come amid mounting calls for Cuomo to resign, as he faces three worsening scandals -- accusations of sexual harassment by at least three young women, accusations of verbal abuse by legislators, and accusations of mismanagement in the handling of the pandemic in nursing homes."

A day late and a dollar short.

A day late and a dollar short.

Maybe, maybe not. Is obvious now the powers to be are protecting Newsom, Whitmer, Murphy and Wolff - same thing happened in their states in their nursing homes!

Don't get distracted by the sex harass stuff, yes he is a creep, but the crime here is the killing off of elderly. What a ghoul.

A stated other gov's are guilty of the same crime, along with Biden's buddy who like to dress up as a woman in PA. Took his mom out of the home then ordered the Covid patients in..Gross!

Don't get ahead of yourself peeps.
It's just beginning not ending ! Welcome to the “Excelsior Pass” !
New Yorkers will now have to show their 'Papers Please", COVID-19 passports will be now required under a new NYC Nazi Program.

Welcome to the “Excelsior Pass”

True Nazi program. What is next?

Not taking the vaccine. No f’ing way. I trust these traitors to the Constitution as much as I would trust any Statist Commissar. It’s clear they have incentivized the entire medical complex
To extract $$$$$ from
The sheeple.

Except we had a functioning, inquisitive press.