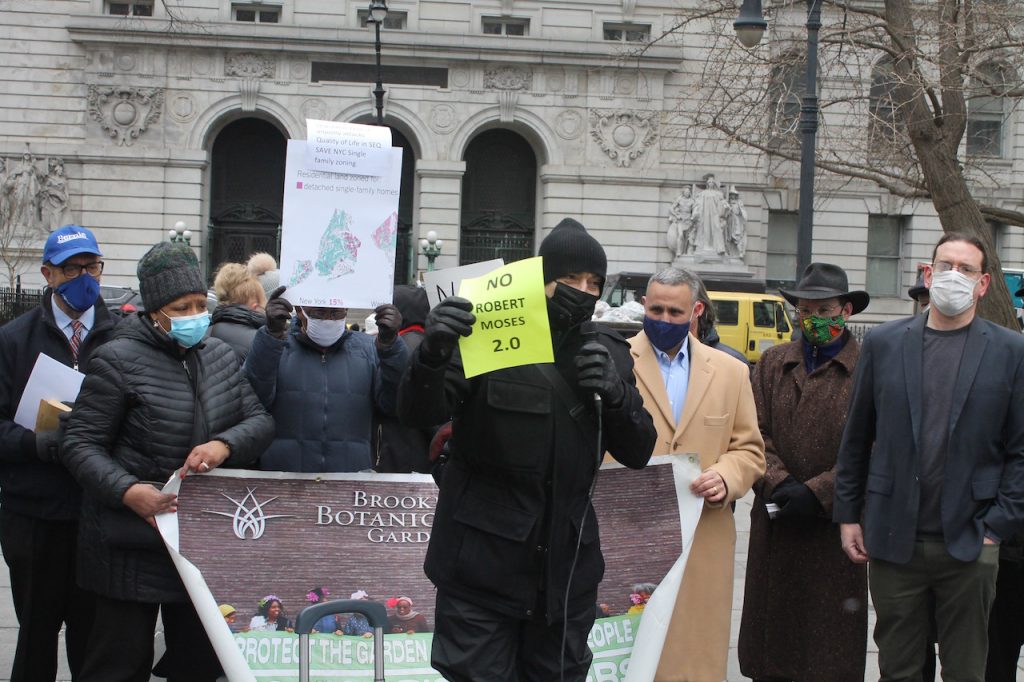 Activists slammed Corey Johnson’s long-range planning bill as a “Trojan horse” for developers at a rally outside City Hall on Tuesday.

The temperature was freezing but passions were heated as speaker after speaker blasted the bill, Intro 2186, the City Council speaker and Mayor de Blasio at the press conference, organized by the Citywide People’s Land Use Alliance.

They derided the 10-year comprehensive planning initiative as “top-down” and “one-size-fits all.” They charged that it would cut the community out of the process and legally empower an unaccountable “director” to ram through district planning schemes — if necessary, over the objections of community boards and local councilmembers.

Most chilling to them was the fact that Intro 2186 would force mandatory upzonings every decade for every single community board in the city — in short, codifying an unstoppable development juggernaut.

Alicia Boyd of the Movement to Protect the People, which is fighting a development project that threatens the Brooklyn Botanic Garden, said the citywide plan is being spun as something that will help low-income black and brown people, when, in reality, it will mainly lead to an explosion of luxury development.

Paul Graziano, a Queens native and planning consultant, has played a role in helping contextually rezone much of Queens to keep overdevelopment in check.

In short, Graziano said, rezonings make the “speculative value” of property go up.

The Mandatory Inclusionary Housing included in the rezonings is a “scam,” he said.

“M.I.H. has not worked,” he said, “because there is no deep affordability. And it’s set up as a real estate program.”

Graziano blasted Vicki Been, de Blasio’s deputy mayor of housing and economic development, calling her the engineer of the current upzonings. He said a report Been headed at New York University’s Furman Center for Real Estate and Urban Policy has been used “to justify upzonings for the last eight years.”

“Eighty percent of her data is wrong,” Graziano said. “You’ve got this administration running this phony agenda and you’ve got “Planning Together” looking to lock it in for 10 years. This horrendous bill…will lock it in.

“Planning Together” is a report, released in December, on which Intro 2186 was based.

Exactly what has he accomplished?

The City Council did not alert any of the City's Community Boards to the introduction of Intro 2186. Mr. Graziano has reached out to community boards across the city to make them aware of what is in this legislation.

Community Board 5's Land Use meeting will be held on Monday evening: