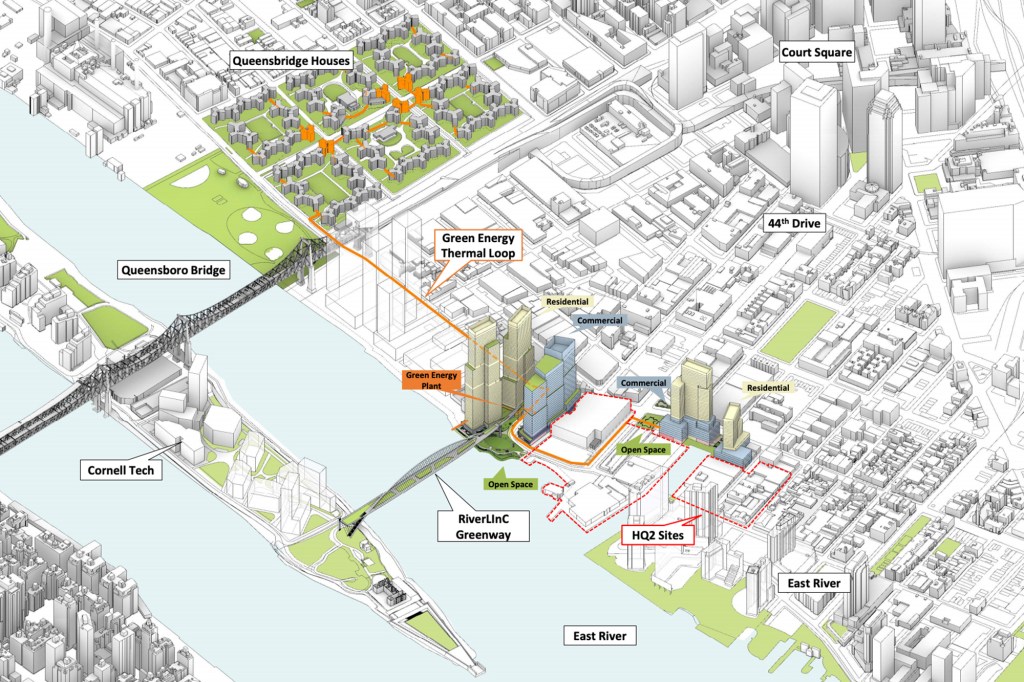 A Long Island City waterfront landowner is trying to get lawmakers excited about turning his property into a “green energy” hub to power neighboring businesses — vowing to bring some spark back to the area after the plan to build an Amazon headquarters there fizzled out.

Bruce Teitelbaum, the general partner of RiverLinC, which owns the six-acre site at Vernon Boulevard and 43rd Street, said he’s had preliminary discussions with city and state officials about building a plant there that could provide eco-friendly juice to others in the area — generated from river water, as well as via solar and geothermal energy.

“It’s a mystery wrapped in a riddle why the city wouldn’t jump at the chance to support the first green energy district in New York,” Teitelbaum said, promising it would create “thousands of jobs” and help cut carbon emissions.

The $250 million project — dubbed River Green Power and abutting the land where the Amazon project was supposed to be built — could connect to the Queensbridge Houses to provide energy to the largest public housing complex in the country, he said.

Mayoral candidate Andrew Yang also has been briefed on the project, according to Teitelbaum, and the plan already has the backing of the Queens Chamber of Commerce — whose CEO called it “fantastic.”

“We’re still smarting over the loss of Amazon. All the reasons Amazon chose western Queens are still there,” said Queens chamber head Thomas Grech. “The Queens Chamber is all for it. I want innovation starting in Queens. The crossroads of energy independence and technology make a project like this feasible.”

How are we as “THE AMERICAN PEOPLE” allowing the media and the Dems to continue to ruin this country...

The only things GREEN in the green energy debacle are the dollar bills, charged under the disguise of carbon trading, carbon taxes.
Corruption to the bone marrow.

Will be $5-$8 a gallon by summer, maybe Memorial day when Bidon and the communist's pass the new tax bill. ---to make free college and forgive all the hipsters loans for degrees in finger-paint. --And grant MORE !!
Oh and change the ways Wills & IRAs are inherited (likely take homes and make all go through a probate with a 50% tax (like socialist Scandinavian country's do)
This country's going to be another Venezuela in as little as 2 years.

Will be $5-$8 a gallon by summer, maybe Memorial day when Bidon and the communist's pass the new tax bill.

Oh yeah, electricity for the electric cars will be paid for by extra taxes on fuel.
Win-win situation until all abandon internal combustion engines. Not the F-22 or F-35 of course, those are needed to kill enemies.

"This country's going to be another Venezuela in as little as 2 years."

In two years the GOP will again have control of the house and senate.

Open Borders are not Green !

**Anonymous Anonymous said...
"This country's going to be another Venezuela in as little as 2 years."

In two years the GOP will again have control of the house and senate.**

White House might tax motorists by the mile to fund $3-4T infrastructure plan !