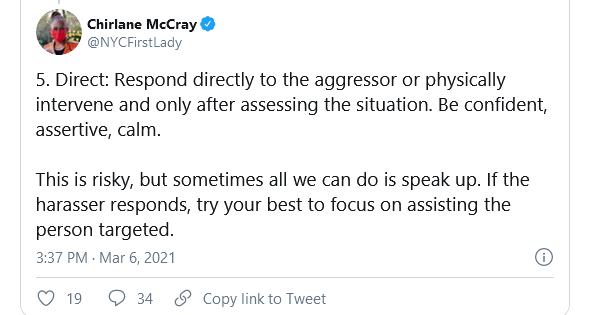 Looks like Chirlane McCray de Blasio as a major problem. In the umpteenth pathetic attempt to justify the existence of the city’s THRIVE mental health program and administrative office, Chirlie’s idiot husband has decided to draw back the NYPD from responding to emergency complaints regarding people having dangerous mental episodes replace them with “violence interrupter” social workers and counselors to quell these situations. Just one problem, the city is having trouble hiring people to take this job, even with the decent government salary and guaranteed health insurance.

Well, Chirlie’s got an answer to that little conundrum and has decided to add another mission to her program by also having people interrupt violent outcomes from racial and xenophobic bias attacks. Apparently, because of the low interest to work for THRIVE, she is outsourcing these tasks to citizens and gave a brief orientation on her government twitter account. Sourcing instructions from some account she follows, she lays out 5 D’s in what to do when the situation arises as you are commuting to work, waiting for your train on the subway or hanging out on the street or park.

In NYC I mostly will only help myself or a family member/love one. Each situation is different. Legal immunity from liability (Think Hate Crime) is in a very gray area now with the Marxist in charge. Domestic violence is the worst. I will call 911 for help or join others and have a group effort.

I wonder who is more mentally ill? Is it the homeless people all over the city or is it the idiots that run this city. I would definitely say the latter.

I was listening to cd#26 candidate Julie Won at Saturday's anti-Asian hate rally in Sunnyside. She said something similar that if you see someone being attacked on the subway, you should intervene - physically, verbally or videoing. In effect, not just See Something BUT Do Something!!! That's right, no matter what your age or physical condition, get your head handed to you from the perp. Then she advocated for defunding the police! The police, mind you, whose job it is to handle violent situations such as this..

You, Dear Citizen, have now been deputized.

These Democrat nut jobs are going to get us all killed.

Well, I won’t be voting for Julie won

Everyone else: Here we go again.
Me: with a bucket of popcorn ��

Wash, Rinse and Repeat. This is way too predictable.

The Poleece are the problem. Get rid of them all
And let me know how that works out for you.

C'mon man!! Just blast a few rounds from a shot gun over their heads.

Blue Anon said...
Did the Viking helmet guy almost overthrew the US government ?
Well this unelected wife of Debozio is destroying NYC !

"It's not a conspiracy theory when we say something crazy!"
-The Left

Just say no to lawmakers tax and spending wishes !

I see Fat homeless people all over NYC !
Think about that sheeple !

Mc Crazy sure is something. Just what that something is isn't fully known but it aint good.

This is apparently the new normal. A cretin takes office and then their wholly unqualified relatives get a de facto job with NO oversight whatsoever. One could say this sort of thing began in the 1990s when the Clintons bragged that Madame Mao was co-president. It's only gotten worse since then.

If this wasn't so dangerous for anyone to try, I'd be laughing my ass off. Remember when Eric Adams the Brooklyn Boro President told constituents to not call 911 on people using fireworks? He said you should talk to them. Well one woman did and she was murdered.

She runs Der Mayor!
And Der Mayor follows her lead....OTHERWISE....no “bedroom privileges”. Why does Duh BLASIO always look comatose....with that frozen face? Medicated to the hilt!

Looking at her that sounds like a very good option.

Why does Duh BLASIO always look comatose....with that frozen face? Medicated to the hilt!

What anti-Asian Hate Rally in Sunnyside?
I have learned to not speak to certain people or groups of people to avoid altercations and violence.it’s not the Asians who get offended all the time and take their hubris out on those they can physically over power.
I’m uncomfortable that the racial group that’s doing the violence and crime on Asians are still being enabled and protected. Bring back bail - do not close any jails or prisons- there are few consequences for criminals - thanks to politicians who have bodyguards

The level of #BLueAnon retardation in NYC right now is absolutely astonishing !