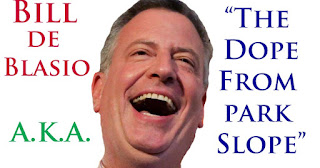 Amid a staggering wave of gun violence in New York City, with shootings this year measuring 42 percent higher than the same period in 2020, Mayor Bill de Blasio announced that he plans to deploy the NYPD to track down and question people who have expressed “hate,” albeit without committing any crime or violation.

Speaking to reporters about anti-Asian attacks that have occurred around the country, the mayor encouraged people who have “witnessed or experienced any act of hate” to report it. “Even if something is not a criminal case,” the mayor explained, “a perpetrator being confronted by the city, whether it’s NYPD or another agency, and being told that what they’ve done was very hurtful to another person and could if ever repeated, lead to criminal charges, that’s another important piece of the puzzle.”

Asked how the NYPD would confront someone who has done something “hateful” but committed no crime, de Blasio enlarged on his prescription. “One of the things officers are trained to do is to give warnings,” he said. “If someone has done something wrong, but not rising to a criminal level, it’s perfectly appropriate for an NYPD officer to talk to them to say that was not appropriate. . . . I assure you if an NYPD officer calls you or shows up at your door to ask about something that you did, that makes people think twice.”

The mayor did not go into detail about the kind of behavior he was talking about, but we can surmise—since he explicitly stated that it wouldn’t rise to the level of criminality—that it must involve speech. Racial slurs or negative references to racial or ethnic identity, while nasty and rightfully unacceptable in civil society, are generally not prosecutable. Promising to involve the police in pursuing people who make intemperate, obnoxious remarks seems like an odd way to prioritize public-safety concerns.

The idea of a special category of “hateful” crime violates good sense. If a crime is a crime, sufficient mechanisms already exist to prosecute and punish offenders. What makes beating someone up “hatefully” worse than beating them up . . . lovably? The point of hate crimes as a category is to express how especially heinous society finds crimes motivated by ideologies of bias like racism, anti-Semitism, or homophobia. To this extent, hate crimes legislation essentially creates a class of political crime.

Does this mean the NYPD will respond for hate speech like "I'm going to rape you", "Gimme your cellphone or I'll stick you" or "Shoot that motherfucker"

Moe said...
A few Nuns back in the day told me they didn't like my tone.
I got detention and had to scraped gum off the bottom of desk tops.

Hey would someone tell this mamaluke I dare him to confront the Nation of Islam Minister screwy Louie Farracan and the bad words he uses about jews,whites o hell,every race on earth,I for one want to see How Big a shoe comfortably fits in DiBlsaios ass.

I tell you what.....you gotta hand it to the elites.....they sure know how to dupe the plebs.

Can we just change the label "progressive" to "coward" or "useless" ?

Our Mayor DeBlazio should call Kamala, the first Asian-American to hold the position of vice president !
She faced adversity and racism and over came.

Never Let a White-Man Crime Go to Waste – Biden orders FLAGS AT HALF STAFF !
NYC should follow his lead !

DeBozo and the Asian Community in Union Square Park:

DeBozo's NY - not even judges are safe:

So does this mean that the black Jewish people who stand on Jamaica Avenue spreading their hate for white people in public can go to jail too? Does this only apply for white people who do this or EVERYONE who does it? Because according to the idiot dumbocrat dictionary, only white people are racists and no other race can be racist even though MOST of the crimes here in nyc against asians were done by non white people.

While I dont think being racism is right or fair,I do think you idiot dumbocrats are fighting a losing battle. I dont care who you want to blame for the recent attacks on asians, Trump or whoever, people have their own minds and those that are easily influenced to ALL OF A SUDDEN be racist are then very weak minded or very sick in the head. Racism is not something that you can erase. People will always have their prejudices against other people. And the media just makes it way worst so they can sell a news story. We can only hope in time it will get better as this nation is becoming much more mixed than it was many years ago. More people will be blended into more than one race and then finally maybe racism would get better in this country. But sorry, by saying that everyone is a racist just by something they say, is not going to stop racism tomorrow. And no matter what country you go to, there will always be racism or hate of some sort. And these idiot dumbocrats can't tell me that racism or hating someone due to their religion doesn't exist in other continents or countries as well. And yes, there is racism and religious hate in Africa and Asia as well no matter how much the dumbocrats and media want to cover it up. The idiot "woke" crowd needs a HUGE wake up call in life.

Do they have BLM in Japan or China ?

Maybe the MSM/ idiot "woke" SJW crowd should take that anger and use it to fight the sex trafficking of the women/girls employed in these so called "day spas." !

"They" are pushing the "stop Asian hate" narrative right now.
Even the FBI said it wasn’t a hate crime !

All Lives Matter !
Including disabled transgender bisexual Guatemalan Muslims that suffer from vertigo.

"The idiot "woke" crowd needs a HUGE wake up call in life."
BuT bUt wHiTe SuPrEmAcY!!!

Also if he was racist why was he good getting “rub & tugs” from the Asian women at these establishments? Asian Fever ?

Also if he was racist why was he good getting “rub & tugs” from the Asian women at these establishments?


Psst, don't ask questions like this, the narrative falls apart.

Biden is sending all new refugees to Buffalo and has renamed ICE so as not to traumatize the new Demacrats
Starting Monday ICE,FORMALY known as Immigration and Customs Enforcement
To Illegal Citizens Escorts.

This could be ground zero for Blue Anon !

Blue Anon is just a rumor !

Boy, I'm sure BLM and antifa will love this, they've been screaming to defund and defang the police, and instead DeBlasio wants to send the police to hassle people who haven't even committed a crime.

I can't wait to see their reaction when the cops chide BLM activist or antifa militant to stop shouting racial and sexist slurs against white people.

They will be applying this evenhandedly, right? They won't just be using this to intimidate working class white and Asian folks, and no one else, right?

"They will be applying this evenhandedly, right ?"
Sure plenty of free Met tickets and metro cards.

"They will be applying this evenhandedly, right?"

Careful those "fact checkers" are going to show up and make you realize you're miss remembering.....

How dare you not make minorities feel like worthless victims, bigot!

"They will be applying this evenhandedly, right?"
Like CNN ?

You cant be woke enough to be safe from the woke crowd. Its Jacobinism.

Knock, knock
Who's there?
Your 10 year old tweets