ROFLOFL: Cojo is running for comptroller 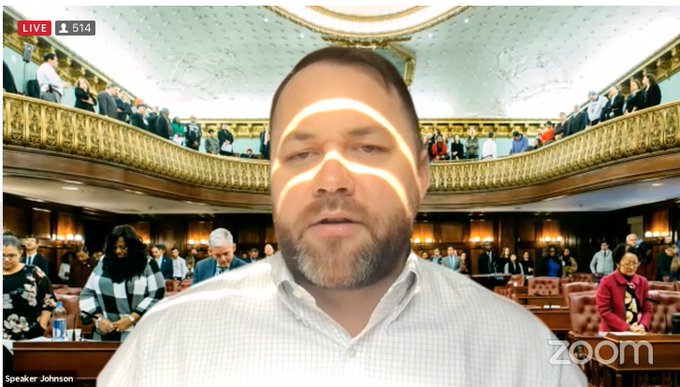 Council Speaker Corey Johnson is throwing his hat in the ring to run for city comptroller, The Post has learned.

Johnson declined to run for mayor last fall after saying he was struggling with depression amid the coronavirus pandemic.

But he has printed up petitions to gather voter signatures to qualify for ballot status to run in the Democratic primary for comptroller, sources said.

The time for circulating petitions begins on Tuesday and runs through March 25.

Johnson, 38, is also for the first time appearing as a candidate at a comptroller’s forum sponsored by the Jim Owles Liberal LGBT Democratic Club on Saturday — a sure sign that he’s running.

“We are privileged to be the first organization in the city to host Council Speaker Johnson, a prospective candidate, along with Senator Benjamin, Council Member Lander, and Assembly Member Weprin,” Jim Owles club president Allen Roskoff said in a statement announcing the forum.

Roskoff told The Post Sunday night, “If Corey is appearing, he is a candidate.”

While mulling his bid for comptroller, Johnson has been taking on-line classes with Columbia University to earn his college degree.

Brooklyn state Sen. Kevin and Michelle Caruso Cabrera, two other Democratic candidates for comptroller, were not invited to the Saturday forum.

The winner of the race will replace Comptroller Scott Stringer, who is term-limited and considered a leading candidate for mayor.

Is he a progressive Democratic lawmaker ?

The city's finances will make him have a relapse with depression

He will win. Never underestimate the stupidity of NYC voters.

Moe said...
They all think they will have a chair when the music stops !

Unfortunately this shitbag will have a good chance of getting elected. His voter base is Manhattan and he's "Progressive".

Caruso-Cabrera is running for comptroller? She must like getting her butt kicked in primaries.

❝A bureaucrat is the most despicable of men, though he is needed as vultures are needed, but one hardly admires vultures whom bureaucrats so strangely resemble. I have yet to meet a bureaucrat who was not petty, dull, almost witless, crafty or stupid, an oppressor or a thief, a holder of little authority in which he delights, as a boy delights in possessing a vicious dog. Who can trust such creatures?❞ ——Marcus Tullius Cicero, (106-43 B.C.) Roman Statesman, Philosopher and Orator

❝Politics is the gentle art of getting votes from the poor and campaign funds from the rich——by promising to protect EACH from the OTHER.❞ ——Oscar Ameringer

❝Our society is run by insane people for insane objectives. I think that we're being run by maniacs for maniacal ends, and I think that I am liable to be put away as insane for expressing that. That's what's insane about it.❞ ——John Lennon

❝We cannot use the word 'hope' if we refuse to face the truth. ALL hope rooted in self-delusion is fantasy.❞ ——Chris Hedges

❝Always beware of the fact that the only thing hindering an all out revolution is your fear of the scraps they throw at you.❞ ——Gore Vidal

❝The truth does not require your participation to exist.
Bullshit does.❞ ——Terence McKenna

Wants to be Comptroller without a degree. Ah-huh.

I bit like the assistant to a certain boro president who goes by 'Dr.' and never finished his degree but got TWO honorary degrees.

The Democratic Party is going to hell in a handbasket. The only way they seem to win office is through fraud on the Presidential level, God knows with what further down the scale.

But does it matter? When a politician walks into the room the typical 'hard bitten' New Yorker acts like someone at a Freshman Prom.

How can you be a Comptroller without a degree and intensive fiscal training? This is a bad joke.

Here's a guy I would want controlling my money. A depressed and alcoholic loser. What problems could there be?
But the stupid people on NYC will probably elect this moron. You get what what you deserve when you elect these people just because they have a D in front of their name.

"Other candidates invited to attend include Harlem state Senator Brian Benjamin, Brooklyn Councilman Brad Lander and Queens Assemblyman Mark Weprin."
How could Weprin, an observant Jew, attend the Comptroller forum to be held on a Saturday?

How can you be a Comptroller without a degree and intensive fiscal training? This is a bad joke.

Apparently is very easy.
One has to be with the in-crowd.

"Unfortunately this shitbag will have a good chance of getting elected. His voter base is Manhattan and he's "Progressive"."

Well, he's joined by a lot of "Progressive" candidates, so maybe they will all get cancelled out

I wouldn’t risk having a drug addict, alcoholic and manic depressive anywhere near the city’s finance!

It is David Weprin, not Mark Weprin running.

"How could Weprin, an observant Jew, attend the Comptroller forum to be held on a Saturday?"

Weprin is "Observant only when it's convenient and politically expedient for him, in other words he's full of shit...

"It is David Weprin, not Mark Weprin running." ?
I can tell them apart by looking at the bad rug on David's head !

About Mark Weprin:
"In May 2015, Mark Weprin announced that he would resign from his position on the New York City Council to become a Federal and State legislative deal- breaker for the Cuomo Administration. Weprin's new title is Deputy Secretary of Legislative Affairs.[3] Weprin officially left office on June 14, 2015. His seat remained empty until the general election in November. Barry Grodenchik was elected and to serve out the remainder of Weprin's term until 2017"
(Wikipedia)