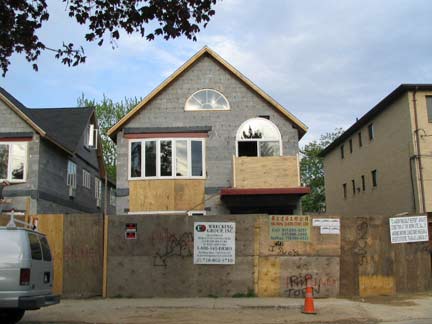 The problem is teardowns — the practice of buying a house just to demolish it and put up a larger one in its place. Sounds innocuous enough, but in an older neighborhood, teardowns can be a disaster. This pattern of replacing architecturally distinctive homes with large new structures that loom over their neighbors ultimately destroys the very qualities that make the neighborhood appealing to newcomers and longtime residents alike.

Sadly, the New York metropolitan area is at the center of this epidemic...teardowns destroy more than houses. Neighborhood livability is diminished as trees are removed, backyards are eliminated and sunlight is blocked by bulky new structures built right up to the property lines. Economic and social diversity are reduced as costly new houses replace more affordable ones, including the modest “starter homes” that our parents knew and that first-time homebuyers still search for today. As teardowns proliferate and once-quiet streets turn into construction zones, residents find themselves pitted against developers and begin to feel they’ve lost control of the place they call home.
Posted by Queens Crapper at 12:21 AM

What needs to be TORN DOWN
is our rotten to the core city government !

Almost every G-d damn politico
is an accomplice to the "developers"
who are in the midst of a mass murder frenzy.....
killing off stable and viable neighborhoods
in their unquenchable lust for more $$$$$$$$$$$$ !

That is the whole point. You ruin the character of a neighborhood so that it can be 'developed' again.

Another failure of the preservation community to reach out beyond their little enclaves in a public education effort.

i live in cb1--we recently discovered totally by aggravation that cb1 sold us out from a r2 to r5 anywhere they feel like it --right up to attatched /row housing...and of course neither vallone or delis etc take responsibility. NOT one person living over this way,including those that faithfully went up to the meetings can recall WHEN this happened and trying to get answers from the politicians is a waste of time.
The speculators are at it again but this time it's beyond belief as HOW does a developer get PERMITS to totally take off the roof...front and back of an existing attatched house,remove the floors and all plumbing etc..leave it all wide open to the "elements"with total disregard to the existing homes that are left and right of it ? jackhammering and sledge hammers going at it for hours now messing with the foundation---no supporting structures left..
how the hell are they getting away with this ? why waste my dime calling 311 as nothing's done--
never mind the future expansion "horizontally and vertically".
wonder how much they GOT paid for this....same as the bs expansion of all the sidewalk cafes.
will somebody/anybody RUN for city council,cb etc ?

There are valid arguments on both sides of the teardown controversy. Redevelopment is not only eminent in many areas, but in changing demographics it makes sense.

From a market perspective, it is usually preferable that new houses be consistent with the character of the neighborhood, even though in some areas, we are not quite seeing that balance yet.

However, restricting teardowns and infill development also restricts the rights of property owners and may devalue property.

Tighter constraints on teardowns further narrows the potential market for your property. I believe that property owners and the market, rather than zoning boards, should determine housing aesthetics and size. In a country founded on private property rights, wouldn’t that be more in line with our national historical character?

Or do we want to allow those rights to be chipped away at, one regulation at a time?