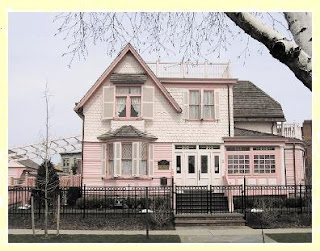 The Landmarks Preserv- ation Commis- sion is holding public hearings on the proposed desig- nations of the Voelker Orth Museum, located at 149-19 38th Avenue in Flushing, Queens. The hearing will take place at the Commission's offices located at 1 Centre Street, 9th Floor North, beginning at 9 a.m. Attached please find a statement of significance for the designation.

The large, picturesque house and garden at 149-19 38th Avenue was built c.1890-91 as
part of the Murray Hill section, just east of the village of Flushing. Local developer Frederick Dunton was on the board of the Long Island Railroad, and probably influenced the construction of a new Murray Hill railroad station in 1889 that spurred development in the area. Four lots on the corner of Lincoln Street (now 38th Avenue) and Wilson Avenue (now 149th Place) were purchased by James Bouton, a local shopkeeper. He owned the property for approximately ten years, during which time he constructed this house.

Conrad Voelker, a German immigrant who published several German language newspapers, bought the house in 1899, and made a series of alterations up through 1909.

Voelker lived in the house until his death in 1930. After that, the house was occupied by his daughter Theresa, who had married police surgeon, Dr. Rudolph Orth. Their daughter Elizabetha Orth continued to live in the house until she died in 1995, leaving provisions and money in her will to establish the house as a museum of local history and nature, hence the name Voelker-Orth.

The large, two-story house has an irregular roof line, composed of a pitched section, a flat section and two jerkinhead gables. Its many handsome details include imbricated shingles, eye-brow dormers, projecting bay windows and porches with wood-shingled roofs as well as decorative leaded-glass windows. It also has a large adjoining open area, currently being developed as a “Victorian garden.” The Voelker-Orth house is one of the few large late nineteenth century houses surviving in the neighborhood, representing a building type once very common in Flushing.

The Voelker-Orth house was recently restored to its 1909 appearance, and is open to the public as a house museum and garden.
Posted by Queens Crapper at 5:13 AM

As a former board of trustees member
of the Queens Historical Society,
one of the 3 organizations that this house
was bequeathed to, I see no real pressing need
for the LPC to designate this structure
(although it certainly deserves it
and it is appropriate for them to do so).

It is not in any immediate danger

It is well protected with, I believe,
its original gift of a one million dollar endowment
and is under the stewardship of the caring
watchful organizations that own
and faithfully attend to it.

This beautiful treasure
isn't about to be sold out to developers
and vanish overnight.
(If I'm correct, it is also protected
under the terms of the donor's will) .

Let LPC devote its time to more endangered structures like, i.e. St. Saviour's Church,
instead of padding their roster of token
landmarked sites with firehouses, public pools, etc.
which are in no immediate danger of destruction .

LPC is doing this simply so that they might say,
"'See what a wonderful job of catch-up we're doing by designating more sites in Queens".

This amounts to nothing less than an LPC
public relations coupe in lieu of genuine gestures!

But alas....Tierney Co. only approves
the designation of safe sites in our borough.
LPC will never buck a developer
who may be planning on demolishing
a historic building.

They will retreat from the fray
and chant their often heard mantra,
"It doesn't meet our criteria" !

We're onto you LPC ("Lazy Partners in Crime")
and will not sleep until Queens gets its proper due !

I sincerely hope this beautiful house is designated a NYC landmark. I used to walk past this house on my daily jaunt to the subway. I remember the elderly woman who was always tending the garden. I had never seen so many roses in a private garden before. I think the designation is what she would have wanted.

I'm "elderly".....
and I also tend my rose garden in my historic home.

And I'm still waiting for the LPC
to designate my area a historic district
before the recent rush on tear downs
make it a moot point !

How rude! The Landmark Commission is not solely responsible for Queens lacking in designated properties.

If the Queens Historical (hysterical, more like it) Society were doing their job in the 1980's & 90's, there would be more landmarks in Queens today. I used to support QHS and called them on several occasions with concerns over endangered buildings. St. Monica's in Jamaica is one that comes to mind. I never even got a phone call back from QHS. The Hammerstein House in Beechhurst was another I was concerned about. I was told that it was "political" by QHS.

In the mid 1990’s, Mr. Saunders at QHS told me that an inventory was being conducted to identify potential buildings for landmark designation. Mr. Saunders is long gone and I called once more about the survey. I never got a response from QHS. That was ten years ago. I really don’t care anymore.

However, The subject is THIS house. I'd like to see this house designated and I have no "hidden" agenda with the LPC, QHS or anyone else.

Queens Histrical Society, yet another do nothing organization. I'm glad this house wasn't left solely to them.

I tried contacting QHS in hopes of getting access to their historical photo collection for a project I was working on. They never returned my calls.

Anonymous said...
This comment has been removed by a blog administrator.
Sunday, September 16, 2007

Byron Saunders did his best while he was at QHS.
Maybe it was a couple of "trustees"
who sandbagged his efforts .

I didn’t say anything about Mr. Saunders’ accomplishments as the Director of QHS. He was a very nice man who seemed to be genuine in his concern for historic preservation issues. He was far too sophisticated for the likes of QHS.

Trustees shouldn’t be concerned with the day-to-day operations of an organization, that’s the job of the director. If this is the problem at QHS, it’s time to replace those trustees and/or the Director with fresh new blood.

The Broadway/Flushing neighborhood
(already a national historic district)
has been waiting in the wings for 1 1/2 years now
waiting for the sluggish LPC
to calender this deserving area
to become the next historic district
before the rash of recent tear-downs claims it.

No...I guess it's not in the cards....
it appears they've bypassed Queens, once again,
and LPC has turned their attention
to 5 districts in Brooklyn !