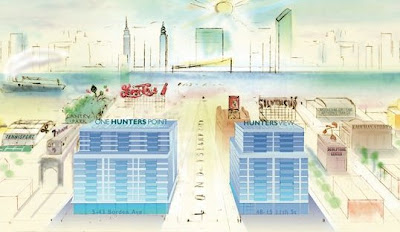 "Hey you want to hear about some real crap, you should check out the losers at Hunters Point Condos and Hunters View. I was at the sales center this week, and the jerk-offs trying to sell apartments there are two guys - one's an idiot the other is a sleaze... I mean I live in Queens my whole life, and everyone is talking about LIC, and I like it there, but why does it seem that all these projects have people that don't know squat about the neighborhood yet they're trying to tell me? I'm surprised they were even able to find it from Manhattan, I mean they have to cross the river and all...

Anyway, they are trying to tell me that I'm going to have Manhattan views but then I look at their web site and see this: Rooftop Gardens

I mean that rendering of the roof deck looks like you're hovering over the water, plus someone there screwed up - either the developer or architect - because now there is one side without any balconies in the Hunters Point condos. Apparently, they didn't realize that someone else is building a building next door and they had to take away those balconies. Plus, who wants to live in front of the LIRR, I read on Queens West that it's really bad. Plus, what is with the marketing "Live Like A Star, Commute Like a Rocket?" How do rockets commute? And what the hell is "Paparazzi Proof"? They have that as a section on their website and in their brochure. Are celebrities moving to Queens?

Then the other shit building that they have, is exactly the same as the first shit building, except it's off of the Pulaski Bridge, and by a major intersection. My wife and I are expecting a baby and don't think it would be safe being right there... What is Brown Harris Stevens doing in Queens anyway? Shouldn't they be selling brownstones to blue haired Upper East Side women who just got Botox? Next thing you know, Sotheby's will be selling McMansions in Astoria...

Anyway just thought I'd vent to you, I felt like the guy was trying to push his apartments too strong and didn't know what he was talking about.. We also went to go see Novo 64 in Forest Hills, what a load of crap that is, it looks like a medical center and is extremely expensive!!! The people over there are idiots also... They should think about hiring kids from Queens College or St. Johns, who are familiar with the area..."

NOVO 64 - a name only an illegal alien could appreciate - better have some cash for this junk. Even the Forest Hills claim is crap - it's off 63rd drive or Rego Park territory. Hopefully it sell poorly so that the deveolpers take a long hot bath.

"Driven by a little old lady only on Sundays" !

Wadda ya want....isn't that being built by Rockrose
(Block-blows) on contaminated land?

Except that insurance companies are no longer offering flood insurance to NYC residents...

What's up with the weird new complex on Queens Blvd. near Target? It looks like a big cruise ship.

this blog is funny stuff. i purchased at hunters view and so far so good. thanks for having fun as sometimes people take themselves too seriously.

hi there i m actually looking at LIC as my next apartment stop - i am interested in your comment about how terrible it is living by LIRR - the link was taken down but can you give me a briefing on what that report is about? thanks

Why by an apartment when you can get a whole house and property for those prices?