The crappification of Leonard Square 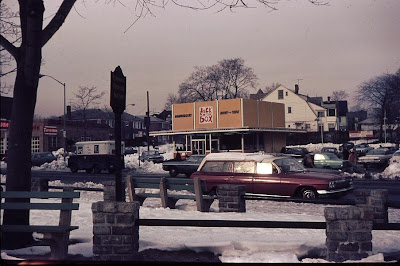 Ah, the spread of Queens Crap spares nothing. Not even a little plot of land called Leonard Square in the Murray Hill district of Flushing.

This odd-shaped piece of territory is formed by the intersection of Roosevelt Avenue and Northern Blvd. It honors Corporal William A. Leonard (1889-1918), a Flushing native who lost his life fighting in World War I.

I'm sending two photos showing the change to this small plot. One was taken in February 1969 by someone in my family. The other was taken in recent times and appears on the Bridge & Tunnel website.

The older photo shows handsome stonework used to support railings surrounding the plot. I can only assume that under the snow was grass. A nice mature tree lends shade to the benches around the perimeter. 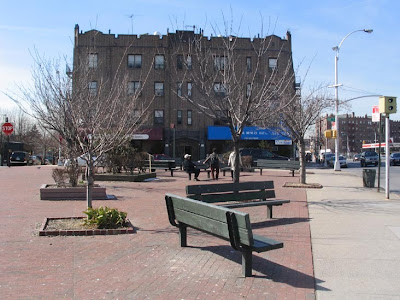 The new photo shows a virtual desert. There isn't a blade of grass, and no mature trees. A few scraggly trees are potted in small square plots. The lovely stonework is gone.

Perhaps you can argue that it was a good thing to remove the railings and open up the square, but why did they have to make it look so barren and soulless?

Bobster
Posted by Queens Crapper at 12:00 AM

It's ironic how
the Parks (their lazy asses on a bench) Dept.
isn't into keeping green spaces anymore.

Low maintenance is their new game......
AstroTurf as opposed to real grass on playing fields.

No more of nature's sponges
to soak up the next heavy rainfall !

I remember the negative change
at Leonard Square very well......
and always wondered just who got the
well paying contract for the ugly makeover !

A lot of day laborers hang out in this area waiting for contractors in trucks to pick them up and give them work so the city/community may have made this square particularly ugly to discourage them from hanging out there all day long. Just my guess.

The square compliments the lovely McDonalds abchored strip mall adjacent to that peice if property on the south and what should be the landmarked IHOP to the north.

I think i just threw up in my mouth a little.

What is on the location where the Jack in the Box was?

Before it was crapped over, this square was a hangout for the patrons of Teddy Bears, a biker bar that was located on the first floor of the apartment building in the photo. The sidewalks on the perimeter of the square were often ripe with smells of urine and vomit. The center "green space" was used by the locals to walk their dogs. The square was redone in the 1990's. I don't know if it is an improvement, but it seems to be less of a headache for the Parks Department to maintain.

If you're driving past this square look out. There's one of those red light camera picture takers off to the side of the square, as seen in the photo.

Ever since Henry Stern left, the Parks Department's Greenstreets program appears to have slowed down considerably.