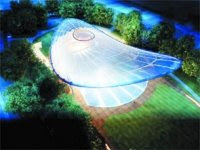 A Community Board 13 panel this week finally voted to back Borough President Markowitz’s controversial bid for a glitzy $64-million amphitheater inside Asser Levy Seaside Park — ending a year of silence on the issue that brought out accusations that the members are just shills for the Beep.

Until Thursday night, Community Board 13 had declined to weigh in on the major project, claiming that it has no role in the approval process for the concert venue. But after a long-overdue meeting of the board’s Parks and Recreation Committee, several panel members pushed a last-minute resolution asking the board to oppose the amphitheater.

And here's the scoop on what happened from someone who was there:

"Joe Maniscalo, the author of this article, has left out a few facts about the Wednesday night CB13 Parks & Recreation meeting.

# 1 There were almost 200 Community residents present. NOT ONE person who resides in the neighborhood, spoke in favor of this project, They were 100% NO !

# 2 Less than 20% of the members of the Parks Committee were in attendance to vote one way or the other on the Amphitheater. The rest were too scared to show up. Heaven forbid they should cast a vote opposing their godfather, Markowitz.

As Joe Maniscalo has written there was a 5-5 vote with 2 votes abstaining which just shows that the Committee is really split down the middle on this project.

Joe Maniscalo also forgot to mention that a few of those members who voted YES have City jobs & they are afraid of going against Marty Markowitz who has instilled in them the fear of God.

Over 13,000 residents have signed petitions opposing this project, showing that a yes vote by the Committee means very little, except to show that Marty's soldiers are all lined up like ducks, with no backbone or spine. They are the ones who are voting against the will of the people.

We will have to wait for the Court battle to determine who is righteous on this issue.."

And the Courier-Life has this to say in an editorial:

Face it: There is no question that Markowitz is dumping this amphitheater in Asser Levy Park without a full vetting. The project is not undergoing the city’s normal public review process, and the Parks Department will select an operator without public discussion.

Much of the project’s $64-million budget comes from a pool of capital construction money that Markowitz controls by fiat.

This lack of public oversight convinces us that Markowitz is treating Asser Levy Park as his personal playground, something he feels entitled to do because he stages a summertime concert series in the park’s current bandshell.

Markowitz says his amphitheater would be a vital piece of the city’s plans for a revived amusement area in Coney Island. But that’s not his call to make. A project of this magnitude and ramifications needs a proper review by the very agencies set up to oversee big land-use changes.

This is not a project that should merely come out of Marty Markowitz’s fertile, Barnum-esque imagination and be dumped on a community.
Posted by Queens Crapper at 1:14 AM

WOW! The people who live around here are screwed! Sorry folks I feel for ya...

But compared to Queens these folks are red meat!

At the rate Queens is moveing forward, it will take 30 years to get even that far.

We should invite them to come to Queens talk about this stuff.

faster340 is 100 % correct.
Marty Markowitz owes his career to these people & he wants to F*&k them over royally.
The problem with his approach to the residents is that he CAN'T BUY THEM OFF. We know he comes from that CULTURE.
He has no leverage. The Community won't stand for his misguided ambitions & vanities.

The community board members can look forward to jeers in all of their future meetings.

What a waste of money but little Marty gets what he wants under bloomberg or he might throw a fit. Someone should make him sign a contract to see if this chip pulls in events to pay back the 64 million? Oh yeah he's not paying anything back.