One fine day last month, Frank Lloyd Crap invited yours truly on a tour of the Ditmars Blvd area of Astoria. After dining at Mike's, we sauntered down 31st Street to where the Crapmobile was parked. Along the way, we met the King of Queens Crap, Peter Vallone, Jr. across the street from a funky out-of-character building, and Frank made an announcement. 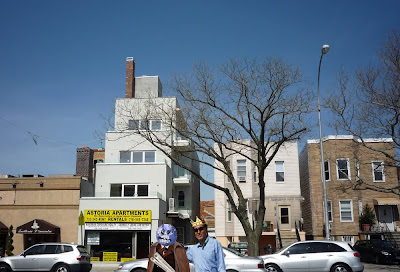 He is proud of his latest design, which was inspired by ancient Middle Eastern architecture. The development will be called the "The Ziggurat" or just "The Zig" for short. 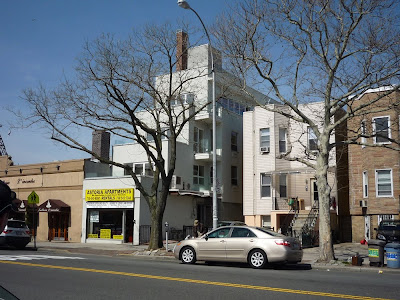 I gently broke the news to Frank that the Zig has a stop work order on it. Pete chimed in with a wink, "Not a concern, because they never stopped working. And not to take anything away from Mr. Crap, who is both a major donor and a Facebook friend of mine, but this isn't a new building at all, but an alteration, as per the DOB." 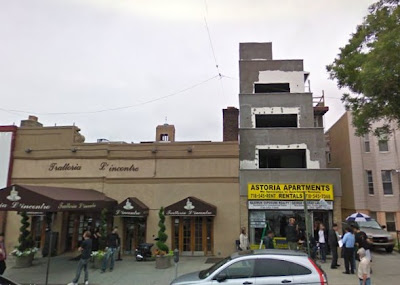 Here's what it looked like back around the time they slapped it with a violation in 2008.

"BUT!" Frank interjected, "Just look at the wonderful amenities awaiting the eventual inhabitant of my latest masterpiece! Transportation and shopping right outside their door!"

Then he whipped this out: 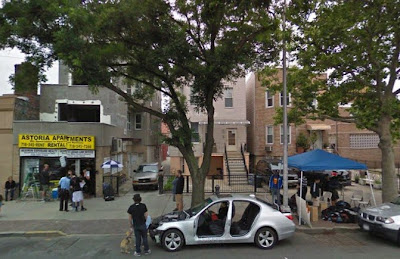 Some things still leave the Crapper speechless. Like a car without doors or a hood next to a vendor tent set up on the sidewalk along a major thoroughfare in Mr. Public Safety's 'hood.
Posted by Queens Crapper at 12:00 AM

The windows on the side elevtion do not comply with the table 3-4 of Building Code. Apparently, the window openings is more than 3-1/3 % of the entire side elevation.

I have a question for Mr. Frank Lloyd Crap, AIA:

Will this ziggurat also have "community facilities" on the first floor?

Yeah, that last photo begs the question "Can you find all the mistakes in this picture?" What a mess.

I leave it to other contributors to take on that task beyond the ones you pointed out, Crappy.

This is a joke right? The picture is part of a movie. I mean really, doesn't everyone compare it to Manhattan? Well Hoboken at least? Williamsburg?

Look at it this way, as one life long Astorian once said upon hearing that her block would make a good setting for a sit-com

"You can't dream this crap up"

The GoogleMaps truck tells no lies...

My Eyes, My Eyes, quick where's the bleach so I can purge this image.

I agree the building is a monstrosity.

But that last picture must, as Name Withheld by Request posits, be part of a movie. Anyone who lives in the area could tell you a) this is not a typical scene and b) even if it were, a vendor tent on this stretch of sidewalk a block and a half north of the Ditmars terminal is nowhere near busy enough for it to be a problem.

a vendor tent on this stretch of sidewalk a block and a half north of the Ditmars terminal is nowhere near busy enough for it to be a problem.
--

But that is the point - we don't pass laws about stuff for someone to decide if they should follow them or not based on little more than their opinion.

They are passed for a reason.

No, you don't plant stuff in the middle of a sidewalk, be it a domino game, barbeque ... or cafe tables.

In Astoria, they do things with a casual disregard for neighbors that was unthinkable a generation ago.

Transients. Absentee landlords. And yes, ethnic makeup (Mediterranean-Middle Eastern) where the standards of a community are something to be casually disregarded unless it impacts the family or clan.

The point that I made is that people on blogs like astorians.com or real estate developers are always comparing Astoria to Manhattan, a contrast that is not only pathetic, but laughable.

But the reason that I included both Hoboken and Williamsburg is that 30 years ago Astoria was far better than both, and today not only lags behind, but is a shabby rundown place where its leadership has given up any semblance in promoting it.

They stick around only to rip out the pipes as someone memorably posted here a few months ago.

In other words, unless you are a speculator building barracks, it a place best avoided.

It’s a place on the precipice and the new zoning is just the thing to push it over.

"It’s a place on the precipice and the new zoning is just the thing to push it over."


Wait till 31st Street has this lining it all the way from Northern.

Who the hell wants to live along an elevated train track.

Will make Roosevelt Ave. a welcome change once it gets cookin.'

Penny Lee and Mighty John Young of Shitty Planning, as well as Community Board One should all loose their jobs.

You are absolutely right about the deterioration in Astoria. Recently, I saw a car driven at high speed on the side walk at 18th Street in Astoria. It rounded the corner, on the sidewalk and then entered traffic at Hoyt Avenue South.

What's a little thing like reckless endangerment when convenience is at stake? By the way, this is the same corner where a motorcyclist was murdered because a motorist decided that she did not have to stop for the stop signs too.

"The windows on the side elevtion do not comply with the table 3-4 of Building Code. Apparently, the window openings is more than 3-1/3 % of the entire side elevation"

Nonsense! These codes are just suggestive in nature. DOB always allows some flexibility if you um... know the right people, so to speak.

"I have a question for Mr. Frank Lloyd Crap, AIA:

Will this ziggurat also have "community facilities" on the first floor?"

I did indeed include a community facility on the first floor! It will be used to house illegals, since we all know that's what serves the community best!

"My Eyes, My Eyes, quick where's the bleach so I can purge this image"

Oh spare me! Put your violin away and get with the decade. Crap Architecture is here to stay! Someday this building will be landmarked as an early trendsetting example of the new style. And with the great Mayor Mike in for another 4, it will be coming soon to a hood near you. Some people just can't accept progress. You probably think 2 Columbus Circle is ugly too.