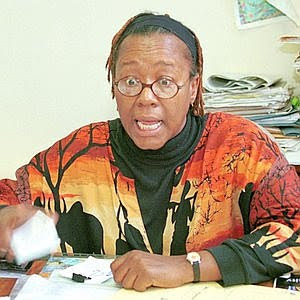 ...Lewis is hardly credible in claiming she represents "low and moderate income people" (perhaps 40% of the subsidized AY housing would be market-rate) or that DDDB's opposition obstructed affordable housing (affordable housing depends on subsidies, and there were long problems with volume cap).

She's silent on the Development Agreement, which provides ample opportunity for delays in subsidized housing, thanks to an Affordable Housing Subsidy Unavailability.

She doesn't acknowledge that she's contractually obligated to support the project.

And she doesn't acknowledge that, when ACORN was reeling from an embezzlement scandal, Forest City Ratner bailed it out with a $1.5 million grant/loan.

Put those aside, as well as a few typos and some unusually personal rhetoric, and Lewis can be taken seriously.

It's sad that Bertha Lewis and ACORN took the side of the developer when the population they serve has historically been the biggest victim of eminent domain abuse. She has no right pointing fingers at Goldstein for accepting money from Ratner when she did the same damn thing years ago.

And last, but not least, there's this: 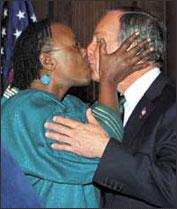 Posted by Queens Crapper at 3:44 PM

I sure hope that woman received her cooty shot.

Was there tongue involved with that smooch?

I thought ACORN was already discredited, but I guess this woman wanted to make sure everyone thinks they're a joke.

Is she crazy enough to think that there will actually be affordable housing at AY? - Or was she just paid off?

Acorn was poorly run in NYC the last few years but keep in mind they were the target of smear campaign from rove etc for over ten years. Cant have those low income people voting now can we? Or people who actually read between the lines and see the GOP lies.

Lets see if some people have the attention span to watch the video presented by Maddow that shows the smear job starting years ago by GOP operatives. Its just 10 minutes.

As Maddow notes, conservatives James O'Keefe and Hannah Giles were not, in fact, in costume during their interviews with ACORN employees. They did, however, openly discuss crimes they claimed they were planning to commit, and ACORN employees promptly reported them to the police.

What the hell does this have to do with the e-mail that this cretin sent out to the press?

in the 1980's bertha lewsi took a payoff from the osetnsible landlord of a building in the south bronx on 136th street where she was thought of as a tenant leader and if she left the tenants would collapse and be moved out, she sold out and the tenants held on for almost two decades... after acord supported ratner, besides millions they got acorn got control of a number of city buildings for 1$, including the one in the bronx, gross

they make a cute couple :)

Wow, I think it is the first time Bloomberg kissed a woman on the lips since the 80s. LOL. Why doesn't Bloomberg come out of the closet already? maybe then he would not be such a douche

Bertha Lewis sounds like a bitch on wheels. What a horrible e-mail she wrote. Danny Goldstein fought the fine fight until he couldn't anymore. He is not a sellout.

That bitch Bertha deserves an open hand slap in the mouth!

After kissing that turtle face, I hope Bertha was treated for salmonella poisioning. I guess Bloomberg would rather kiss her than kiss Christine Quinn's ass.

There is nothing more frightening than ignorance in action. Bertha Lewis is a blasphemous cunt. That letter about Daniel Goldstein was uncalled for. How can anyone be that insensitive?

Bertha came across like a mean-spirited, self-serving, arrogant boor with a serious chip on her shoulders.

Does Bertha or anybody really believe the poor and middle class will benefit from the Atlantic Yards project in the form of "affordable" housing?

Bertha Lewis is scum of the earth. I think I'll prank her phone number.

I got room. It's between my ears!

And I thought Bloombag was gay.

Bertha = The Original Sell Out Scum

Since ACORN is a private corporation, it does not divulge its finances. Further complicating any effort to calculate ACORN's income is the fact that it operates an unknown number of front groups, many of which conceal their relationship to ACORN. Any thorough investigation of ACORN's finances would have to determine the cash flow through each and every one of its front groups. Notwithstanding these obstacles, EPI's October 2004 report The Real ACORN makes some telling observations regarding ACORN's profitability. It notes:

"…ACORN receives an estimated $7.2 million per year from its 120,000… member families. In addition, ACORN has received at least $16 million in grants from deep-pocket foundations during the last five years. … The organization also receives considerable support from trade unions. While unions are not legally required to disclose their grantmaking activities in the same manner as private foundations, it is clear that they have given millions of dollars to support [ACORN's] living-wage campaigns."

To update the figures in the preceding paragraph, as of March 2006 ACORN claimed 175,000 member families on its website, each contributing at least $120 per year. ACORN therefore implies that it receives about $21 million in annual membership fees. This gives us some idea of ACORN's income.

As for ACORN's expenses, the EPI report reads as follows: "It is estimated that ACORN employs . . . 150 organizers across the country. With each organizer making approximately $20,000, this amounts to a labor cost of only $3 million. With over $10 million a year flowing into ACORN and so little being spent on labor costs or overhead, just what is happening to this mountain of financial support?"