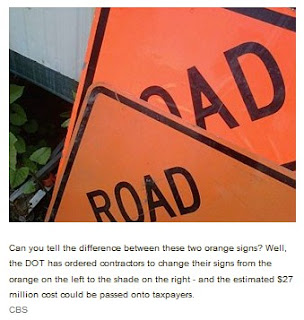 Here's a new reason for critics of wasteful spending in New York to see red: the color orange. It's a decision by a state bureaucrat that's costing taxpayers a lot of green.

You may have noticed it on roadwork signs – a switch from one shade of orange to another that's costing taxpayers an estimated $27 million.

For years, New York required contractors to use constructions signs with a shade of orange known as "Type 7."

That is, until the Department of Transportation decided that "Type 7" just didn't cut it anymore.

The DOT ordered road builders to buy millions of new signs in a slightly different shade of orange – "Type 9" – a change that cost the industry $27 million.

A new report from a government efficiency task force points out that contractors simply "are now passing [that cost] back onto the state in the form of higher contract prices."

There's no sign that the DOT is letting up on the questionable spending, either. It recently ordered slight changes to concrete barriers that will eventually cost taxpayers $33 million.

A state task force has ordered the DOT to appear at a hearing next week to explain these and other examples of apparently wasteful spending.
Posted by Queens Crapper at 12:30 AM

But they cut funds for student bus passes (and you can say the same thing for the Malcolm Smith item).

Orange you glad that this is how your money is wasted!!!

I wonder who runs the company that makes the signs. And who they know in Albany.

the democrat/liberal political gangsters are spending money that they do not have. they then raise...raise...our taxes to pay for their corruption.

taxes enough already.(TEA PARTY INVOLVEMENT WILL SEND THEM THE MESSAGE)

"the democrat/liberal political gangsters are spending money that they do not have."

Well, to borrow a word from The Alaskan Moron I "betcha" that the motivation for this needless expense is the influence of some well-connected and probably very republican businessman.

".(TEA PARTY INVOLVEMENT WILL SEND THEM THE MESSAGE)"

HA! tea bags are DOA here in New York. BTW: Did you notice that pathetic little rally they held on Tax day?

lino is the biggest loser on this site

hey lino take a look at the video you should educate yourself before you post http://www.youtube.com/watch?v=x-ttmKadC3k

the state run media did not cover the TEA PARTIES ON L.I. Riverhead,Happauge,Hicksville,on April 15.
my freind attended the tax enough already protest at the n.y.c.post office(32street/8th avenue.he estimated 4000 citizens were there. i estimate that the Hicksville protest(i was one of the peaceful citizens) count was 900-1000 citizens.

i urge all to seek out your local tax enough groups or start your own.the democrat/progressives are planning high tax European socialism for American citizens. REMEMBER IN NOVEMBER,,,,,,

now Crapper is gonna yell for being off topic...this is why we can't have nice things

Anonymous said...
hey lino take a look at the video you should educate yourself before you post http://www.youtube.com/watch?v=x-ttmKadC3k

Please, the Associated Press and NYPD both claimed the total at just over TWO THOUSAND.

Even a modest event in Central Park gets more than that.

Even up in Beantown their event barely made 5000 --and that's with an appearance by The Moron From Alaska.

Don't bother to come back with some inflated figure from some right-wing source..I've seen all of these.

for every citizen that protests in person at the TEA PARTYS,there are hundreds of thousands who will react to the out of control democratic spending at the polls in november.

don't you and your partners use your limo's to travel in the tri-state area ?lino,the limousine liberal/progressive. while your delivery illegals risk their lives on bikes on the u.e.s.

How about this, America, first, last and always? No wonder the founding fathers thought that parties were a pernicious influence on this country.

It is time to root out all scoundrels, wherever they may lodge and rebuild and protect our beloved land.

"It is time to root out all scoundrels, wherever they may lodge and rebuild and protect our beloved land.
God Bless America."

Well, I guess that does it for the GOP. You do know who got us into this mess..don't you?.

liberalism is a sickness.lino has got to be the the sickest.

"Anonymous said...
liberalism is a sickness."

--Stupidity is a plague.

Still parroting that AM radio crap. BTW: How is that 80 year old bag doing these days. It seems Mr Gigante (why the name change?)"broadcasts" from the basement of his home in an assisted living community.