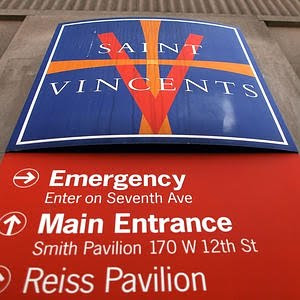 As the hospital prepares to close down its emergency room tomorrow, Paterson is proposing that Lenox Hill Hospital temporarily operate a 24/7 "urgent-care facility" at St. Vincent's until a permanent location can be found.

Despite its name, an "urgent-care facility" handles only low-threshold injuries and illnesses; more serious problems would have to be transported by ambulance to other hospitals.

Which raises another serious health issue: Many more seriously ill patients, like those suffering heart attacks, may lose critically important treatment time by going to the urgent-care facility rather than a genuine emergency room.

Said Dr. Charles Carpati, chief of intensive care at St. Vincent's: "It seems like they were trying to have a speedy political resolution that sounded good but was not the result of any study or the voice of the community or physicians."

Then there's the financial issue: Use of St. Vincent's property would have to be approved by the bankruptcy court -- not at all a sure thing.

Not to mention that the state grant covers only two years of a five-year contract -- and, like St. Vincent's, Lenox Hill also has been struggling for cash.

Which gets us to the fundamental point: There are too many hospitals in New York City -- and the competition is sapping the financial integrity of all of them.

- Ok, so Governor Paterson scrambled to do something to put a band-aid on the loss of St. Vincent's. When two hospitals in Queens closed on the same day, he did absolutely nothing.
- Screaming by Manhattan pols got a small bone thrown to them, screaming by Queens pols accomplished absolutely nothing.
- The Post looks at NYC as a whole and determines there are too many hospitals operating instead of looking at individual neighborhoods and how they are impacted by the closures. Clusters of open hospitals in Manhattan don't help people in southeastern Queens.
- Closing hospitals anywhere in the city while pushing to add a million more people to the city is not exactly the smartest move. But Bloomberg gives less than a shit about any of this. After all, he has a McMansion in Bermuda to retire to each weekend.
Posted by Queens Crapper at 2:07 AM

Many of the doctors in attendance said they are closing there offices and packing it in if this Obama-care isn't rescinded.

another result of mike bloomberg and the democrat machines policy of catering to the 1.5.million plus illegal aliens. sanctuary has got to stop now.

No hospitals, no city growth.

Does anyone remember 911 - where did many folks affected or nearby that inhaled the debris and got sick go then?

What happens now if there is another great catastrophe of any kind - we go to Massachusetts by emergency ambulance?

'The Hypocritical Oath'
I swear by the almighty dollar, the healer, Ivan Boesky, Michael Milkin, and Fabrice Tourre, and I take to witness all the Wall Street gods, all the goddesses, to keep according to my ability and my judgment, the following Oath and agreement:
To consider dear to me, as my parents, him who taught me this art; to live in common with him and, if necessary, take all his goods from him; To look upon his children as my ticket to Vegas and beyond, to teach them a hard lesson.
I will prescribe regimens for the good of my bank account according to my ability and my judgment and never do harm to my bottom line.
I will not give a lethal drug to anyone unless I am asked by a big Pharma Co, and to do so for big rewards.
I will preserve the purity of my life and my arts at all costs to my customers.
I will cut for gold, and platinum is nice too; I will leave the tallying operation to be performed by accounts, specialists in this art.
In every house where I come I will enter only for the good of my self and my spawn, keeping myself far from all intentional good-doing and all seduction and especially from the helping the poor and really sick peons, be they free or slaves.
All that may come to my knowledge in the exercise of my profession or in daily commerce with men, which ought not to be spread abroad, I will keep secret and will never reveal.
If I keep this oath faithfully, may I enjoy my life and practice my art, envied by all men and in all times; but if I swerve from it or violate it, may the reverse be my lot.

What a shame... It's always the people who need it the most who lose out not the owners! So sad!!!!!

Thanks slush fund Christine Quinn!!! Keep up the good job screwing NYers even those in your own district.

Get after City Council - this is low hanging fruit so take it!

No schools, no hosiptals, (add your fav here) no growth!

[x] Male
[x] No, not of Latino, Hispanic or Spanishg origin
[x] White

There goes the neighborhood!

"What happens now if there is another great catastrophe of any kind - we go to Massachusetts by emergency ambulance?"

Not sure why you'd want to come to MA for care, things are just as bad up here.

"go to Massachusetts by emergency ambulance"

Yep, Basicly and sit in triage.
A friend of mine died in Canada due to social health care. The local "hospette" didnt have a MRI or CAT scan to see a epidural bleed was squeezing her her brain.
In Canada they have these little community hospitettes that lack lack neurosurgical, trauma and cardio staff spread out around the country.
They fix broken bones, cuts and runny noses and are staffed with basic medical students.
If you have a real problem like a brain bleed, get shot, bad car accident or heart attack your shipped by ground 300 miles to a major military like hospital.
You are usually dead by then.
That's how Canadians afford health care for everybody.

Bloomberg IMO should be jailed for mass negligence and endangering with the lives of 8Million people in this city.
The sanctuary policy must go now if there is any hope to restore order.
You will see what I mean on TV May 1st

Bloomberg IMO should be jailed for mass negligence and endangering with the lives of 8Million people in this city.

none of the limousine liberals ever go to communist castro Cuba for medical care. they get it in the capitalist U.S.A.

castro flew in a doctor from Spain,when on his death bed. btw ,this savior of his 1850's society is one of the richest dictators in the world.

The Scumbag mayor runs the city and people like a big corperation. Appoints all the bosses and F's everbody not of his own kind.
His customers are tower people and devolopers.

Anybody else can get the F_ out or move to Queens and become $$ generating census figures for Manhattan.
Mayor midget, Tom Souzzi and Ted Kennedy will be shairing a bunk in hell one day

Read "The God That Failed". 6 people accounting their "disillusionment" with Communism.

Here in 2010, over and over again, the collectivist mindset wants to repeat the failed examples of history. "Health care for all" cries the Illegal Occupier in the White House just so he doesn't have to be ashamed when his effete dinner-party companions snootily remark: "but you Americans don't have health care". Joe is right, look at that collectivist toilet known as Canada. "Hospettes" indeed. Here, the Social Security Ponzi scheme is on the verge of cracking when the Boomers retire. Look at the mess that Greece is in right now: rioters demanding that their "entitlements" not be cut.

2014 when the Obama health monstrosity goes into effect will be a watershed year.

Did you know the orchestra played "Nearer My God to Thee" as the Titanic sunk?

[x] Male
[x] No, not of latino, hispanic or Spanish origin
[x] White

George:
All the ammo in the country is sold out go to any hunting supply store.
Just who has all these bullets and ammo magazines ?
It sure not the cops and boys in Afghanistan

"Nearer My God to Thee"

I spoke with James Cameron some years ago and have a theory George.
There were actually two entirely separate music units, that performed on the Titanic. (7 musicians total)

One was a quintet orcestra that played tea times, dinner's & Sunday service lead by Violin and Keyboard player Wallace Hartley

The 2nd was was a French string led trio of violin, cello and piano that played in the reception room around the bolted in pianos inside at several cafe's .

Two weeks after the disaster, the orchestra leader Wallace Hartley's body was recovered from the Atlantic, still wearing his bandsman's uniform with a **diatonic** accordion still strapped to his body indicating they likely played "happy Music" with wind instruments.
It was the orchestra that played, but the song
"Nearer My God to Thee" is doubtful (in my opinion)
It cant be played on a simple diatonic accordion let alone with woodwind and brass instruments.
The Keys and scales cant possibly line up.
I think they played rag-time party music that was at its peak at that time.

"The greatest city in the world" must really be going down when they're closing a hospital in the middle of Manhattan.

Thy didnt close, went bankrupt !
Hospitals are forced to provide services to illegels at gunpoint then stiffed by the very same goverment holding the gun for payment.
Kind of like the Mafia worked in the 40's

Joe: There's debate as to what the orchestra played as the Titanic sunk. Local 802, the Musicians' Union addressed this question in their April issue of Allegro which you can find archived