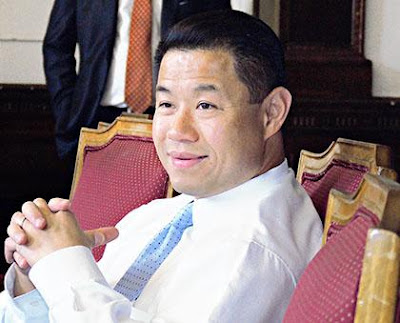 Liu made some of his strongest remarks so far about recent developments in the saga of the $800 million Flushing Commons mixed-use project that Community Board 7 recently approved for the site on Municipal Lot 1 in downtown Flushing.

He was the councilman for the neighborhood and supported the project when initial plans were drawn up between the city and the project’s developer in 2005. The plans called for the project to include at least 2,000 parking spaces, a youth center and capped parking rates.

Less than a year later, the plans had been amended to eliminate such provisions and Liu withdrew his support.

When Liu left Flushing for citywide office, Peter Koo (R-Flushing) took over as councilman and gave his endorsement to the project, which is now before Borough President Helen Marshall. Liu noted Koo has the right to make his own choices now that he is councilman.

Marshall did not rule on whether she supports the projects and comments ran largely along the lines of those heard at last month’s marathon public hearing before Community Board 7 ﻿on the Flushing Commons and Macedonia Plaza projects, but the issue of compensation for local business owners remained the key point of contention for most opponents.

Yesterday, Marshall voted in favor of the plan.
Posted by Queens Crapper at 1:37 AM

Does anyone know what her recommendations were exactly?

I take back my vote for you as a future mayor of NYC Comptroller Liu.

there all in it for the money

there all in it for the money

Can Liu look any more smug?

Liu paid the community lip service while the real fight would be fought after he was out of that office. He's as dirty as any one of them.

Yesterday, Marshall voted in favor of the plan.

On Wednesday, May 12, 2010, at 10:00 a.m., in Spector Hall, at the Department of
City Planning, 22 Reade Street, in Lower Manhattan, a public hearing is being held by
the Office of the Deputy Mayor for Economic Development in conjunction with the
above ULURP hearing to receive comments related to a Draft Environmental Impact
Statement (DEIS) concerning disposition of City-owned property from the Department
of Citywide Administrative Services; the designation of the Urban Development Action
Area and Project and the disposition of property from the New York City Department
of Housing Preservation and Development (HPD) to a designated developer chosen by
HPD; amendments to the Zoning Map and the text of the Zoning Resolution (ZR), as
well as various special permits related to public parking facilities and waivers
pursuant to a General Large Scale Development, a special permit from the New York
City Board of Standards and Appeals (BSA), and other related actions, to facilitate the
construction of five mixed-use buildings (collectively known as “Flushing Commons”)
and the Macedonia Plaza affordable housing project, on the block bounded by 138th
Street, 37th Avenue, 39th Avenue, and Union Street (Block 4978, Lots 25 and 46),
located in Queens Community District 7.