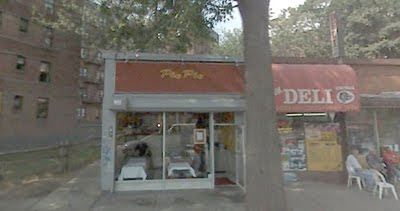 A Peruvian restaurant chain, Pio Pio, is being sued by nine former workers for alleged labor law violations—less than two years after it paid out $287,713 to settle a lawsuit filed by the U.S. Department of Labor, in which it was charged with failure to pay minimum wage, overtime and abide by record keeping laws.

There are eight Pio Pio restaurants in Queens, Manhattan and the Bronx and the latest lawsuit claims that six of the eateries ran afoul of a number of labor laws, including not paying workers their full tip earnings, paying non-tipped workers from a tip pool and docking workers' pay when mistakes occur such as breakage of plates and glasses. The complaint also alleges minimum wage and overtime violations.

If it is still opened, then the food must be good.

The chicken is pretty good, and the aji (sp) is very good - two kinds, you have to ask for the garlic one. The rest of the stuff you can get anywhere - avocado salads and salchipapas you can get at Pollos Mario or any of dozen other S. American places. It's their market presence that draws customers, good geography, the restaurants are nice to look at, and their food is consistent. Unfortunately they shoehorn you into tables and the service is bad. Now we all know why. I wonder how viable the operation will become now that they have to actually pay their workers.

Wow the chicken and their sauce is awesome. I have been here numerous times.

The food is awesome, but the guy at the front seems like a jerk. He never smiles, don't know if he's the owner or just one of the workers

Regardless of what the food is like or what their labor practices are, this restaurant - at least the one on Northern Blvd. in Jackson Heights - is a bad neighbor. When it renovated the space it's in, it took over part of the alley behind it to create an outdoor dining area. Fine, except that one wall of that space is the side of an apartment building, and some of the tables are as little as five feet from people's bedroom windows. The restaurant's customers have a way of being noisy, especially when they have live music, yelling and cheering, sometimes until around midnight (thank heaven, they close at midnight). The police (and the Department of Environmental Protection and the local City Councilmember and the Community Board and the Public Advocate's office) have been called many times but somehow they always seem to find that "no violation was observed." People have actually moved out of the apartment building because the restaurant made life in it intolerable. The city's noise law is great on paper but is meaningless unless it's enforced. A very crappy situation, and the city does nothing about it. The restaurant and the city are creating an incentive to leave the city, to turn it over to the savages.