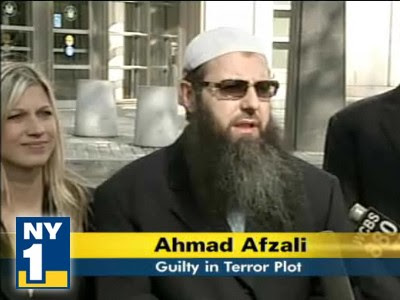 Ahmad Afzali pleaded guilty in March to lying to authorities as part of a plea deal to avoid serious jail time.

The judge ruled today that Afzali will not have to serve any additional prison time beyond what he has already served.

Afzali has agreed to leave the country within 90 days to avoid deportation to his native Afghanistan, but told reporters he does not know where he will go.

"The sad part is, is that I have to say goodbye to the only country that I know," said Afzali. "My kids were born here, my family lives here. But it's going to be a tough transition, a tough trip. It's not going to be easy."

Unbelievably, a Times Ledger editorial actually expresses sympathy for this piece of shit!!!

90 days!!! WHy was he not escorted to JFK immediately upon release? This guy is going to disappear into the undocumented underground economy and will continue to support terrorists. The Obama administrtaion can do NOTHING right.

Initially, I felt that anyone who opposed the proposed Sheepshead Bay mosque was a bigot, but after seeing its imam's incendiary speeches on YouTube, I can see who is the true bigot.

But we feel empathy for the imam.

Good God, the sheer stupidity of white liberals never ceases to amaze me! The Times Ledger reporter who wrote this piece of shit editorial is the type of person that would say: "You know, Adolph Hitler really wasn't that bad of a guy!"

He was caught between a rock and hard place and made a bad choice. In the end, the sentence seems just.

Technically, if he was caught between "a rock and a hard place", that would mean that he's in Iran right now, since Iran is between Iraq and Afghanistan, which is a "hard place".

But if he's deported to Afghanistan, that would mean he's in "a hard place", rather than between Iraq and a "hard place" (Afghanistan).


From the flyer in the article on the mosque in Sheepshead Bay:

We just want to prey [sic] and educate our children in Islam to be true Muslims.

Indeed! That's all you guys want to do - prey!

You all will love serene calls to prayer.

If this mosque gets approved, I'd advise you to move. You're going to hear these "lovely serene calls" non-stop, 5 times a day, at the crack of dawn. They're going to blare this shit throughout the neighborhood. If you complain, you will be called "racist". If this is approved, sell your house!

We are peaceful people [sic] and mostly do not support terrorism.

Mostly? In what instances is terrorism acceptable? At the very least, at least these clowns are honest!

That's rhetorical, I have no desire to follow your fairy tales.

Initially, I felt that anyone who opposed the proposed Sheepshead Bay mosque was a bigot, but after seeing its imam's incendiary speeches on YouTube, I can see who is the true bigot.

Another liberal gets mugged by reality! Welcome to Queens Crap!!!

I admit I am not following the Sheepshead Bay mosque story closely, but it is my understanding that it's as-of-right.

Boo hoo. Don't let the door hit you on the way out. Maybe now you'll appreciate what a wonderful country the United States is. You don't deserve to live here. Traitor!

"We are peaceful people [sic] and mostly do not support terrorism.
Mostly? In what instances is terrorism acceptable?"

Why was he not transported out of this country using the correct method, on a rail while dripping tar and feathers.

This guy should have been escorted by Federal marshalls out of the country. He is a threat to national security and should have left our country immediately.

I'm sure the jihadis in his new land will be very welcoming to the man who blew the whistle on a planned attack.

What's a mullah to do?

I love this blog! Thank you Crappy for cutting through the bullshit.

The same people who write editorials like this justify the thieves and muggers on the streets: they have to make a living somehow, so white people had better cough up the money and shut up.

In this damn upside down society, the liberal drivel has reached the level where it expresses pity for the supporters of terrorism.

This guy should be hanged on live TV like Saddam Hussein was and broadcast across the world, instead he is being allowed to go back to his backwards, bigoted Middle Ages society to cause more harm to people he deems as 'inferior' to him.

see wikipedia: "QUISLING" the traitor Norwegian, government official who collaborated with the NAZI'S (national democrat socialists) as they trampled over Europe.
my wife and her families town was occupied for five years. after the Americans and UK troops freed them ,they executed (QUISLING).

that is a normal human action. the government in the U.S. is no longer normal.it has become a gang of QUISLINGS.

Assuming that this guy does actually leave our country, how long will it be before he returns under a different name?

The feds could'nt find some charge to keep him in the USA locked up? I think he is probably more dangerous to the USA, in his own country-In the USA at least he could be locked up or Watched closely.

Send the Judge out of the country with this guy ASAP!