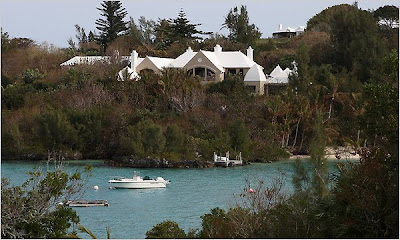 Mr. Bloomberg, who owns a waterfront estate here, has walled off his life in Bermuda from voters in New York, arguing it is none of their business. He steadfastly refuses to say when he is on the island, and to blindfold prying eyes, he has blocked aviation Web sites from making public the movements of his private planes.

Mr. Bloomberg bought an estate in Bermuda, called Stokes Bay, by 1998. He demolished the 2,620-square-foot house and commissioned a local architect to replace it with a $10 million home nearly three times its size in Tucker’s Town.

Even by Bermudan standards, it was flashy: five balconies, four bedrooms, seven bathrooms, an in-ground pool and space for four cars, all hidden by a gated driveway, according to documents on file with the Bermuda Department of Planning.

The plans showed a sprawling property dotted by “imported” palm trees, long pergolas and a ridged roof that collects rainwater for drinking.

Mr. Bloomberg’s new neighbors did not approve. In a tart letter, the planning committee at the Mid Ocean club, which acts as a zoning board for nearby land, complained that the proposed house was “too large” for the site and would result in the “obliteration” of views for nearby residents. It deemed the project “unacceptable.” The Bermudan government found its own problems with the plans. Its marine experts objected to the mayor’s proposal to build a large dock in front of the house, arguing it would disrupt the sea grass beds in the area, records show.

Mr. Bloomberg’s architect agreed to shave three feet off the height of the house and abandon plans for the dock.

The mayor also takes along a police detail when he travels, flying two officers on his private plane and paying as much as $400 a night to put them up at a hotel near his house; the city pays their wages while they are there, as it does whether Mr. Bloomberg is New York or not. Guns are largely forbidden in Bermuda — even most police officers do not use them — but the mayor’s guards have special permission to carry weapons. A spokesman for the Police Department declined to comment.

At times, though, his attempts at privacy border on the extreme. Shortly after Mr. Bloomberg was elected mayor, he requested that the Bermudan government seal all of his housing records, according to a letter from his architect. The government refused. Since then, the mayor’s gardeners have stopped trimming the vegetation around his house. It has grown several feet taller and now largely blocks the viewfrom the water. (The downside: it obstructs the mayor’s view.)

City Room focuses more closely on this hypocrisy. (Of course, not until after the 3rd term election...)
Posted by Queens Crapper at 12:00 AM

Since then, the mayor’s gardeners have stopped trimming the vegetation around his house. It has grown several feet taller and now largely blocks the viewfrom the water. (The downside: it obstructs the mayor’s view.)


But it doesn't prevent us from seeing the "No birds Allowed" sign.

And in the latest news on the bloomberg McMansion he his trying to rename the Island Bloomburda but since no one wants to live on the same land as him he is having trouble securing his bunker.

Now if I can just prompt the Onion to take this idea and run with it.
He has to be the biggest ego maniac on Earth besides Berlusconi, Murdoch, or Kim Jong Ill.

Hope that the next time he goes home to Bermuda he falls off one of his balconies. What a nervy little twit. The Bermudian Government should ban him from their beautiful island before he redevelops it and turns it into a slum like New York.

Ah Bermuda, a great place in the Sunshine for crooks.

I don't like how he is hiding being gay by escaping to here with his boyfriend.

Bermuda and Turks is where all the crooks have homes and bank accounts.
One of the few places in the world where you will find Arabs, Israelis and Kosher NY polititions side by side partaking in some blond Shiksa-Charm.

The local Bermudian Government in charge of that isand is just as dirty.
Not much different then Aruba where the devil spawn of police brass & polititions get away with gang rape and murder.

Then its time to bring in the joint provisional liquidators, eh?

Give the books a good audit and clean out the bad guys, right?

Anyone have change of a million?