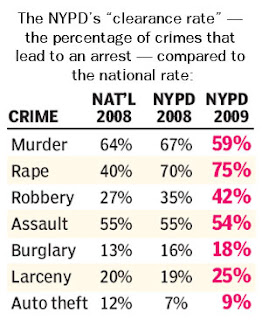 The NYPD solved 59 percent of homicides last year -- down 8 percentage points from the year before, and about 5 points less than the national average in 2008, according to data obtained under a Freedom of Information request.

The "clearance rate" -- cases where arrests are made -- plummeted despite detectives having to investigate a near-record low 471 slayings, police records show.

"All the cases on TV are solved with evidence," said Vernon Geberth, a famed detective and former commander of the Bronx homicide task force. "People start to think we can solve all these crimes."

The data came out during an alarming uptick in murders. There were 139 homicides so far this year as of April 18, a 27 percent jump over the 109 killings in the same period last year.

The easiest crime to get away with was car theft -- just 9 percent were solved in the city and only 12 percent nationally. And auto thieves are not slowing down. They swiped 2,869 vehicles in the Big Apple this year, up from 2,852 over the same period in 2009.

The NYPD closely guards its performance figures, unlike crime stats, which cops are required to turn over to the FBI.
Posted by Queens Crapper at 12:05 AM

The Nypd Wants Vetern detctives to tetire.Then they promote uselees cops who haven't a clue.Women,minorities and othe people from the diversity pool get first and second grade promotions to appease the libs and racial politicians.The people of nyc pay in the end.

I'm not one to believe NYPD numbers, and I'm certainly not saying the city is actually safer, but I have to ask where the controversy is here?

Yes, it's bad that the clearance rate has dropped for homicide, that can never be a good thing. But, if you look closely, every statistic -aside from homicide- since 2008 on the provided list has either improved (70 -> 75% for rape) or is within a margin of error (55 -> 54% for assault).

More robbers, burglars, larcenists, car thieves, and rapists are being caught. The decline in the clearance rate for assaults, is negligible, and easily within any reasonable margin of error.

The only (VERY) alarming trend here, is that there are less murderers being caught. I've read that this could be due to a change of culture in the force, with far fewer honest veteran detectives investigating these cases. Combine that with declining numbers in the ranks thanks to Bloomturd, and that is not a good situation to see.

Were he operates his Opioids , cocaine, & heroin drug trafficking trade out that he sales and supply's
On the road at concerts he plays at. Were he makes his large sums of cash more than the DEA AND IRS could imagine
Yeah, this animal is a piece of work. were surprise he got away with this for so long. With his contribution
of Drug over dose deaths in the country from the poison he peddles..there's definitely
an injustice of Double standard Going on, when it come's to this low life criminal.