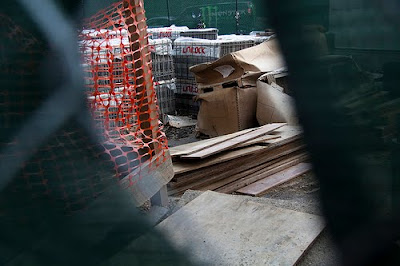 From the LIC Millstones Blog:

In a Queens Chronicle article of April 15th, 2010- EDC spokeswoman Libby Langsdorf stated that the Millstones are actually too fragile to be moved. Which is apparently not true, as the photos above show. Compare with those of the millstones in other posts, and you can clearly see that SOMEONE was embarrassed enough by the photos of them published at this blog to actually move them. Who was the “archeological resources consultant” that supervised this?

quoting from the Queens Chronicle article -

Project managers said they intend to consider the stones during construction work. “The city and EDC are fully aware of the historical significance of the Colonial-era millstones at Queens Plaza,” said Libby Langsdorf, spokeswoman at EDC. “They are secured at the site, where there is little activity at this time.”

At this time, the EDC believes that due to the excessive weight of and fragility of the stones, it might be safer to avoid moving them.

“We are in the process of engaging an archeological resources consultant to help us develop a longer term plan to ensure their safety,” Langsdorf said. “Eventually, the millstones are to be incorporated into the new public plaza to be constructed in the area.” 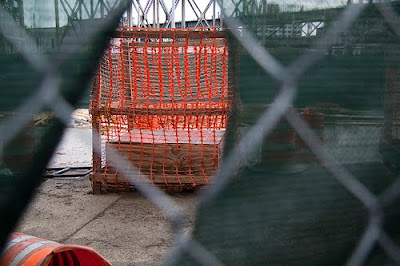 One of the Millstones is now inside of this little arrangement of scrap lumber and orange safety netting, and has been moved around 10-15 yards from the spot it enjoyed under the tree in other times. Bravo.

The latter is exactly the sort of thing that the antiquarian community is concerned about.
Posted by Queens Crapper at 7:12 AM

Graziano and Trent, both big in that self-styled history group that meets in Borough Hall, has signaled their support (by their silence) for Corey Barak's controversial Queens Civic Congress position which thinks this treatment is fine.

Makes sense because they both have senior positions in that group. Makes more sense when their Landmarks chair comes from an area with no landmarks.

Now you might think that the landmarked districts in Queens have shown an interest? After all, did they not ask everyone to testify for them when they needed help getting designation? Think again. Emails not even returned. The thinking is "They got theirs. Now you get yours, sucker."

Help from the broader city? When museums hear that EDC and pols are involved, they mumble excuses (when they respond). After all, Queens is always considered a bit of a laughing stock when it comes to preservation so no one 'important' will say (or even notice) anything.

Ironic when, in only the space of a generation, a place once legendary for model housing and planned communities is now a by-word for human barracks.

No my friends, the only support for this is the local community. And seeing the displacement of Hunters Point, the disastrous zoning of Dutch Kills, and the detached self-entitled leadership of Astoria, they know they are going to get screwed.

Now if they wanted to put up a 15 story building, or some vote garnering tweeder program, they couldn't hold back the pols with a stick. But, since this serves no purpose and sets the dangerous idea of something coming up from the grassroots, it can be ignored. Sooner or later, the thinking goes, they will tire and move on. After all, as the only voice they listen to (in a community of 1000s) is George Stamatiades who calls them "A bunch of rocks." So what is the big deal?

But sometimes, when even a doomed attack is your only option, you got to do it.

Standing up for your rights is the American way. A people's judgment by history is still important. This is the legacy those rocks will provide our community.

The local community is the true heroes in this unfolding tragedy, a spotlight of hope in a world of little frightened people without backbone to save these scraps of our past let alone their rights.

These stones are gonna end up like the restored NYS Pavilion tiles.
OOPs smashed by convenience

Naw, they will find someone local to ok their transfer to somewhere else. It would have happened by now if the cat did not get out the bag. But the original reporter on this was given a new assignment and it was made clear to him that this beat now belongs to someone else.

The papers, normally under the clubhouse, and one or two authorities (with their own agenda)will go along with it to get rid themselves of this embarrassing problem (like St Saviours, after being hailed as being saved, now rots in a container somewhere).

Dissenting opinions will be given worthless marginal press.

The real culprits, the local electeds, will escape once again.

Like mobsters, they get away with beating up their community, then leaving them in an alley to lick their wounds and commiserate their helplessness …

and groan once again under the weight of a hopeless 'ya can't fight city hall' and that's that.

the JACKALS seek to destroy any vestige of the AGRARIAN founders of America. When will the ploughs be once again beaten into swords?

this shows that landmark designation and real community preservation n this city is for all intents and purposes dead.