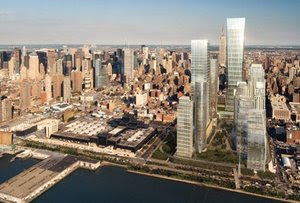 From the The Real Deal:

The Metropolitan Transportation Authority has approved its $1 billion deal with the Related Companies to redevelop the 26-acre former Long Island Rail Road site along the Hudson River, the Associated Press reported. Related must pay $20 million when the contract is signed and an additional $21.7 million over the next year, according to the agreement. But the developer is also allowed to delay closing until the city’s office vacancy rate drops to 11 percent and apartment prices reach $1,200 per square foot.

That's nice. The MTA needs money now, however. They always make such stupid deals.
Posted by Queens Crapper at 12:59 AM

The deal should be for the buyer to pay the MTA fees upfront with at least a 25% purchase down payment and then let the metrics dictate the rest. Commitment is the name of the game and the MTA brass will eventually work for Related once out of office - a reward for structuring the deal this way. related could in fact sell it's rights once times improve and make out like bandits.

Odd timing that corresponds with the request for federal funds for the 7 train extension. hmmm