Giant project hinges on a couple of highway ramps 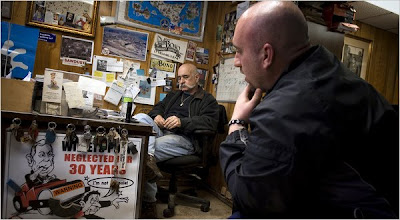 It is one of Mayor Michael R. Bloomberg’s signature projects — the sweeping transformation of Willets Point, a slice of Queens that has long been among the city’s most neglected pieces of real estate. And a little over a year ago, it seemed like a done deal.

The City Council approved the proposal, which would sweep aside the car-repair shops, junkyards and small factories in the shadow of Citi Field to make room for 5,500 apartments, parks, office buildings, stores, restaurants and a hotel.

Many of the largest property owners agreed to sell to the city, and the city could use eminent domain to force out those who refused.

But a convergence of a Park Avenue lawyer known for toppling big projects, a sawdust maker bent on keeping the family business where it has been for decades, and a pair of highway ramps that exist only on paper threatens to doom Mr. Bloomberg’s grand vision.

The ramps, which would connect Willets Point to the Van Wyck Expressway, seemed like a minor detail at first and never came up during the noisy public hearings before the Council’s vote.

But, as it turns out, they are critical to the project’s survival.

But if I were a bettor, I would put my money on these guys.

Now the cat's out of the bag on the money spent to acquire a handful of properties thus far...
Posted by Queens Crapper at 12:04 PM

I'm praying for the good guys. Hope Claire and her criminal friends get what's coming to them.

Does anyone have an accounting of the amount of money that Shulman and her cohorts stole from the city so far? Johnny Liu, where are you?

Way to go guys, "f" Bloomturd and the machine!

Everyone, please read /see the pics on the "these guys" link on Crappy's post, good stuff!

Shulmans' LDC received $450,000.00 from EDC. A contract explicitly states that funds were provided by EDC "on behalf of the City". Both the LDC and EDC are prohibited from lobbying by the section of state law under which they are organized. However, EDC continued to fund the LDC, even after becoming aware that the LDC had retroactively registered as a lobbyist and also was under investigation by the Office of the City Clerk. The paper trail created mutually by the LDC and EDC conveniently omits any mention of lobbying, despite the fact that lobbying occurred and was the admitted intent of the LDC since its inception. False and misleading information was provided to the City Council, effectively preventing the Council from exercising its oversight authority. The LDC even went as far as filing a Form 990 with IRS, indicating that the LDC engaged in "No" lobbying -- while at the same time, retroactively registered as a lobbyist with New York City and State. Recently, the LDC retroactively amended its lobbyist filings at the Office of the City Clerk, to drastically reduce the amounts reported as lobbying expenses (from $129,999.99 all the way down to $9,750.00 for the year 2007, for example), while incongruously tripling the number of entities acknowledged as "targets" of the LDC's lobbying.

Despite all of that suspicious behavior, last year Governor Paterson announced that Shulman's LDC is the recipient of a large state grant award in excess of $1.5 million, from the Brownfield Opportunity Areas Program. The state is awarding this grant to the LDC, despite the LDC's apparent failure to meet the statutory criteria which are prerequisites to receive such a grant.

I have taken the 7 train and LIRR through Willets Point for years. Even within the train, the low tide smell overpowers. Same during Mets games during low tide. The place is a swamp. I hear F. Scott Fitzgerald used to call it the waste land. And they want to build apartments, stores and hotels there? There's a reason this swamp hasn't been "developed" for so long.

"The 1,255 acre (5 km²) park was created from the former dumping ground characterized as "a valley of ashes" in F. Scott Fitzgerald's The Great Gatsby. The site, known at the time as the Corona Ash Dumps, was cleared by Parks Commissioner Robert Moses, in preparation for the 1939-1940 World's Fair. Faced with having to dispose of the mountains of ashes, Moses strategically incorporated a significant portion of the refuse into the bases of the Van Wyck Expressway running along the eastern side of the park, the nearby Interboro Parkway (now Jackie Robinson Parkway), and the Long Island Expressway that divides the park into north and south halves. The Grand Central Parkway separates a western lobe from the main part of the northern half, while the east-west Jewel Avenue bisects the southern half."

Like I said the whole time...Mayor Moneybags wants to leave a legacy of giant, out-of-scale projects in NYC.

The willets point project is a glowing example of that. And those new apartments included in the plan will not include any affordable housing.

I hope Willets point remains a junkyard to spite the mayor and his boro cheerleaders. The land grabs and eminent domain abuse in the city are nothing more than the plans of ego maniacs.

Enough of this Fucking shit already!

Give the landowners what they paid taxes for...paved streets, adequate lighting, and adequate sewers. On the other hand, it may be an eyesore, but it's OUR eyesore. Imagine the lawsuits when people who buy condo apartments in the area get a "whiff" of reality aka the Flushing River. Still waiting for Claire Shulman and John Liu to go for a swim. Ha Ha Ha Ha Ha

I hope this gets alot of media attention, and the mayor gets humiliated.
All my admiration to the Willets Point business people. This can do a lot to improve the city and lessen Tweed-ism.
Its so easy to forget we have a mayor who changed City laws for his own self interest

Pave the streets, fix the sidewalks, put in a sewer system.. and over time you will see the land develop on its own.

Ramps are only part of the stinking problem.

I keep on telling "granny" Shulman not to dispose of her "Depends" in the Flushing River!

you guys are putting up a great fight and your winning ,WOW good luck