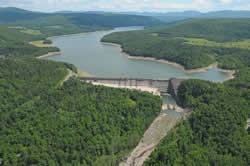 New York's water supply got new protection from natural-gas companies Friday after environmental regulators put up a roadblock on drilling near city reservoirs.

Any gas well in the 2,000-square-mile upstate watershed will require a costly and complex environmental review, the Department of Environmental Conservation said.

Gas companies wanted to use a new technique called "hydrofracking" to pump a chemical stew underground and force out gas from an underground formation called the Marcellus Shale.

The DEC hopes to complete a statewide policy for Marcellus hydrofracking later this year, but Friday's decision means the unfiltered reservoirs that feed New York City will be exempted from the statewide rules, as will Syracuse's reservoir.
Posted by Queens Crapper at 12:27 AM

This has been hanging over our heads for several years, I am glad someone up there has seen common sense on this. You wreck the water supply and you will have f'ed the entire downstate region..you know the area that pays for all those hick towns up there.

From the above article:

"The gas in the Marcellus is held like bubbles in a brick of Swiss cheese. To extract it, a mixture of water, sand and chemicals is shot into the earth with such force it fractures the rock, releasing the bubbles to the surface. When the gas surfaces, so does the water - laden with natural toxins from the shale, including suspected cancer-causing compounds."

"In New Mexico, oil and gas drilling projects that use waste pits, like those proposed for New York, have leached toxic chemicals into the water table at some 800 sites."

Queens crapper duped, nah.... cant believe it, but, anything less than a statewide ban means drill and destroy:
Don't trust the DEC

You may have heard or read that the NYS Department of Environmental Conservation (DEC) has decided not to allow gas drilling within the Catskill and Delaware watersheds, which supply water to NYC.

On April 23rd the DEC announced that it will exclude unfiltered water supplies from its generic environmental impact statement. Instead gas drilling applicants will have to go through their own environmental review process to obtain permits. [1] In the 1992 GEIS there are other situations which trigger an additional environmental review.

The main question is why did the DEC decided to release this statement now, instead of including it in the final Supplemental Generic Environmental Impact Statement (SGEIS)?

Here are three good reasons for this public relations stunt:

1. To diminish public opposition
Late last October, just before the start of the public review of the draft SGEIS, Aubrey K. McClendon, the head of Chesapeake Energy, announced that his company would not drill in the Catskill and Delaware watersheds. However, he was not willing to tear up their current leases, or sign a binding agreement never to drill there. Nor could he speak for the dozens of other gas drilling companies. The public saw through his maneuver and submitted over 14,000 comments to the draft.

It seems that Pete Grannis has been taking lessons from the CEO of Chesapeake Energy. After all, he may be working for Chesapeake in a few months.

The last thing the DEC and the gas industry want is an multi-year moratorium. This press release is merely an attempt to stop these bills.

3. To try to avoid some legal requirements of their environmental review.
NYS is in a very difficult position because no matter what they do they are going to get sued once the SGEIS is finalized. This move is an attempt to avoid some of those legal issues. However, it's not likely to succeed since it simply creates a new legal challenge.


The point is this: gas drilling would still be allowed in unfiltered water supplies. The DEC's decision does not block gas drilling anyplace, and it may not be legal.