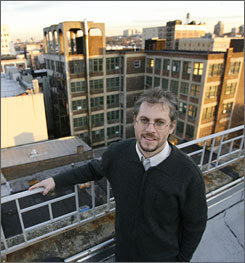 The last man standing in front of the Atlantic Yards bulldozer has stepped aside.

Daniel Goldstein — founder of the anti-Atlantic Yards group Develop Don’t Destroy Brooklyn and plaintiff in numerous unsuccessful suits against the $4.9 billion project — has reached an agreement with the project’s developer, Forest City Ratner, to move out of his condo on Pacific Street in Prospect Heights.

Mr. Goldstein confirmed that he would receive $3 million from Forest City. He bought his condo in 2003 for $590,000, but the state seized title to it under eminent domain last month, leaving Mr. Goldstein facing eviction. Mr. Goldstein said he would move by May 7.

Michael Galinsky, a filmmaker who has been making a documentary about Mr. Goldstein and Atlantic Yards called “Battle of Brooklyn,” said that “to not have made some kind of agreement at this point would have been irresponsible.”

Here is a statement from Daniel Goldstein about exactly what transpired.

So who the hell is the winner here?

- Daniel and his family lost their home as well as 7 years of their lives fighting against this project. Sure they have money, but after paying the lawyer, paying taxes, and finding a comparable home, there really won't be much profit made.

- Forest City Ratner has lost many millions of dollars and their project has been drastically downsized.

- ACORN pretty much has lost everything.

- The MTA is in dire financial straits in part because they accepted a low ball offer from Ratner for the right to build above their train yard.

- The City (meaning us) is left with a boondoggle project that we will be forced to pay for one way or another over the next few decades. There is more likely to be acres of parking lots than affordable housing and the best case scenario gives us a shitty basketball team, a bunch of permanent but part time minimum wage jobs, and a huge traffic headache in return for allowing the destruction of a neighborhood that was actually doing fine without intervention.

- Worst of all, we still have the country's worst eminent domain laws on the books, which will continue to be used on the little guy by corrupt developers and politicians. Hopefully, awareness of the work done by Develop Don't Destroy Brooklyn and other groups fighting this abuse will lead to an eventual change in the law.

This is one of the few issues where the far left and the far right agree yet the jokers we have put in power won't do anything about it. That's a real problem.
Posted by Queens Crapper at 7:39 AM

Goldstien has put millions in his pocket at the expense of the thousands of people who donated to his organization -- DDDB.net.

they deserve to be paid back.

Goldstien has put millions in his pocket at the expense of the thousands of people who donated to his organization -- DDDB.net.

What the fuck are you on about?

I think $3 million was right for Goldstein. I just wish everyone got $3 million also so this could have been a fair transaction for everyone.

Nevertheless its sad that greedy developer, Bruce RATner gets to have his way with the blessing of mayor Moneybags and BK boro president, Marty Moose.

Home and property owners are not safe from eminent domain in New York City.

The politicans are not to blame.

The preservation community is, as usual, the bug in the bed on this one. You don't see this in Brooklyn Heights or Landmarks West.

They just sit tight and as alumni, make donations to places like Columbia and NYU, have dinner with their friends and neighbors in development or financing development, earn money as perhaps architects, and turn the blind eye as the media (to say nothing of the legendary spirit) of NY sinks to the level of well, you fill in the word.

This will not be an age that the future will hold in high regard.

We live in a time of democratic despotism in which all men are said to be equal and all were free to go about their business, but none are citizens.

The government seeks, no the contrary, to keep [people] in perpetual childhood ...

it provides for their security, foresees and supplies their necessities, facilitates their pleasures, managers their principal concerns, directs their industry, regulates the descent of property,

... such a power does not destroy, but it prevents existence, it does not tyrannize, but in enervates, extinguishes, and stupefies a people till each nation is reduced to nothing better than a flock of timid and industrial animals of which the government is the shepherd

"The government seeks, no the contrary, to keep [people] in perpetual childhood ... "


A retarded liberal would say:

So did Klink Cannoli! Where you been?

I was out cuttin' the grass. ;@)
I may not post very often, but I try to keep my ear to the Crap.

The Guess Who:
Maybe Miles or John from CT.

Amercian Woman stay away from me... got No Time For You.

They were a great Canadian act with out the offshore antics of other 'artists.'