So that's what's going on at the former Caldor site! 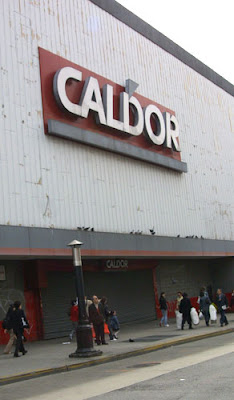 The store formerly known as Caldor will end its 11-year dormancy when a new development opens in September.

High-end hotel magnate Sam Chang has begun work on a new use for the community eyesore, investing $15 million to create a "major super store." It will feature retail on its first floor, a supermarket on the second and a major Chinese restaurant on the third.

"We definitely want to do it as upscale as possible, with all the money we're spending there," Chang said.

The developer promised no small vendors would be on the retail floor of the building. He was quick to assert, "It's not the Flushing Mall."

The Long Island-based developer leased the space for 15 years from Vornado Realty Trust, with an option to renew for another 15.

A series of building permits have been granted since mid-December that allow renovation of the property.

Chang said he has no plans to expand or deviate from the original use of the site, which is zoned C4-3 which limits use to retail commercial development.

The developer also hopes to include about 350 spots-worth of valet parking at the site.

Just to refresh your memories, the NY Times had this to say about Chang a few months ago:

Investors, real estate brokers and hotel chains love Mr. Chang. Community groups, some elected officials and the hotel and construction unions, not so much. Critics contend he has built his empire barely within city codes and are vowing to stop his freewheeling, nonunion operations in manufacturing districts like the garment center of Manhattan.

Well that's Manhattan. This is Flushing. Bring him on!
Posted by Queens Crapper at 1:48 AM

"We definitely want to do it as upscale as possible, with all the money we're spending there,"

Isn't that similar to what Damon Hemmerdinger planned for Atlas?

superstructures of companies... any shopping mall has the same effect on me, capitalism at its best

I'm sure it will end up just a rat-maze of small stalls selling roots and seaweed and electronics from SORNY and MAGNETBOX.

Why not build a bookstore like Barnes and nobles or borders.

Why not just build a bus terminal there instead?

Flushing and "upscale" is a perfect combination.

You don't need to find a chink in Flushing's armor to waltz right in and build more crap.

Floo-shing has a long history of sleazy development beginning with that notorious criminal Tommy Huang.

As little as possible, no doubt!
They even let Tommy Huang sit on their board.

Yawn...glad I don't live or shop there anymore.

More space where "round eyes" will feel unwelcome. It's a real eye opener.

I'm sure it will end up just a rat-maze of small stalls selling roots and seaweed and electronics from SORNY and MAGNETBOX.

hey, as long as they supply funds to the Democratic Machine, vote the right way, who cares. right "Honest" Joe Crowley and Gary "WhoreAds" Ackerman?

Why not just build a bus terminal there instead?

??? not possible by the way the structure is. Plus the city has no money.

I'm excited about it. I used to get pissed about all this stuff in Flushing but now I've come to realize you CAN'T FIGHT IT. You just can't. Unless you have x millions of $. Embrace it people.

On a side note:

Just imagine if they sign that into a bill in NY. I predict a real estate market collapse in Queens and Brooklyn's 8th avenue..and huge local business losts.

Thought the bus depot would have been a better idea. After all, how will all the people from the Willets Point development get to work and school? I thought a major transportation hub would be a given. I guess that would be called city planning. The city wants none of that. My Bad!

Sorry Wellington Z. Chen (the "little duke"behind it all).

Frushing is destined to remain "A crappy little Chinatown", as you were once quoted saying in the press.

One more reason not to bring my trade to that stinking, overcrowded cesspool.

After I did my taxes...I figured out that I'd spent about $5,000 outside of Flushing (where I used to shop).

No more though...you've lost me (and many other shoppers) well over a decade ago.

Flush-town is only a "destination of choice" for the desperate seeking cheaply made goods.

When Macy's eventually closes you can bury that town.

(LOL) and Myra Baird Heasre will drive it to the cemetery.

You mean the president of the Flushing Chamber Pot (LOL too)?

If that old broad smiles one time too many, her face lift will give way.

More space where "round eyes" will feel unwelcome.

If you have "round eyes" and live in Flushing then you are the outsider now. It doesn't matter how many years you've lived there. Learn to speak Chinese and Korean or leave!

LOL. you guys are funny..and racist. I don't see you guys say anything about little Italy... or Harlem. Sigh. We are all getting more uneducated. This is America - a melting pot. Haven't you learned from US History. If you don't like it, go back to YOUR own country where you ancestors came from during their generation when they immigrated to here.

btw.. and I'm not even Chinese.

LOL. you guys are funny..and racist.

Who gives a shit what you think? It matters not if you are Asian or not. The discrimination by Asians against other races is evidenced by the store signs and attitudes when you try to shop in their stores. Amused? Get bent!

I'm waiting for the Home Depot marble floor tiles to be plastered all over the outside walls for that "upscale" effect"...

Close the borders NOW! To hell with the global economy!

Its funny you call it a "melting pot."

That hasn't existed in decades.

Melting Pot implies people come together and form a community, drawing on all cultures.

The new America is a Salad Bowl. Mixed together, but not blended.

And that you cant blame on natives. Its the newcomers who want no part of mixing in.

I'm waiting for the Home Depot marble floor tiles to be plastered all over the outside walls for that "upscale" effect"...

Let's get them some of that toxic Chinese wallboard as well.

LOL. you guys are funny..and racist.

Notice how the elected officials for the Flushing area ignore the need for better communications and tolerance among the constituents. This can't be good for the future of the town. I suspect that ignoring problems is part of an agenda involving real estate deals and commercial ventures.

btw.. and I'm not even Chinese.

Flushing and "upscale" is a perfect combination.

I had more chance wandering around inside the dormant Caldor site than I will visiting this new "destination."

Give me the days of Woolworth's and Hurdy Gurdy, the pizza parlor next door to it on Roosevelt Avenue. Anyone remember that?

"Up scale hotel developer" Sam Chang? That's like calling the Huang family tasteful entrepreneurs. Sure Sam is annoying with his diamond Rolex, but he's still a few notches above the bottom-feeding Huangs.

Screw all of you. I want my live octopus.

is the Caldor still on the building

No it left more than a decade ago.

Sign on outside of scaffolding, may be on future use since it said (in English) "Restaurant, Supermarket, Residential"

Turn it into a target, or Kohls dont need more chinese next to Macys.