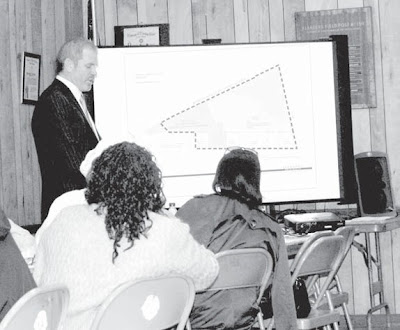 A local developer’s request to rezone two stretches of land in Corona headlined the Wednesday, Apr. 6 Community Board 4 meeting, held at the VFW Flanders Field Post 150, at which the builder’s attorney was on hand to detail the community benefits of the proposed modification.

The speaker informed board members that the project would revitalize a downtrodden neighborhood rife with graffiti, litter and various forms of criminal activity.

“It’s going to be nicer than your typical development,” promised Chester. “We want to make sure the buildings are constructed with architectural integrity … something the community can be proud of.”

Specifically, community board members were asked to endorse the changing of a M1-1 District to an R7B District property in order to allow the lot to match the existing residential character of the areas surrounding it.

Attendees were further informed of Argento’s commitment to add at least 75 underground parking spaces for the future inhabitants of the dwellings, along with flowers and greenery that would be planted around the edifices and on street sides.

Chester acknowledged the unique configuration of the lot in question, but assured listeners that ample entrances would be provided for large trucks to enter the gated property in case of an emergency.

Along the 91st Place portion of the area, Argento’s representative proposed turning the existing R7B commercial overlay into a C2-3 District that would prevent a future influx of car dealerships and other similar businesses in that particular pocket. The commercial locations currently in the area, he mentioned, would be allowed to remain.

When asked by board member Judith D’Andrea whether the developer intends to address the growing need for additional classroom space, Chester communicated that Argento has already leased the biggest portion of his parcel to Newtown High School.

Chairperson of the Postal Committee Stephen Castro, on the other hand, expressed his concerns about safety and asked that 24-hour security be provided by the land owner, along with a sufficient amount of lighting around the perimeter of all three buildings.

Both board members and other attendees at the April session were receptive to the rezoning application, including former City Council Member Helen Sears, who vouched for Argento as a “responsible” individual who “cares for the area.”

She predicted that the undertaking would beautify the community and ultimately help foster the creation of local jobs.

Argento, it was noted, is well known for owning and operating soundstages over the past 25 years in Greenpoint, Brooklyn.

Resident Maria Alvarez Castro sang a similar tune by adding: “I’m here to support the project. This will bring light to the neighborhood; it will bring back small businesses.”

The board later voted unanimously to approve the rezoning and subsequent building construction, which won’t immediately commence, according to Chester, since credit and financing for construction projects is very difficult to find during the nation’s ongoing recession.

“We started this in 2005. We are not putting a shovel in the ground tomorrow given what the economy is like today,” shared the attorney.

The community board’s public hearing will reportedly be followed by testimony that will be given at an upcoming Queens Borough Board meeting. Subsequent approvals would then have to be granted by the Department of City Planning and the City Council.

Okay, so the board is saying they still need more school space, which makes me wonder why DOE didn't buy this property for a new school instead of putting yet another one in Maspeth and busing the Corona kids there. Doesn't it make more sense to build the schools where the kids live? The guy says he isn't even ready to build anything and won't for some time. Why waste the opportunity to get a decent sized parcel? Why didn't Nick Comaianni suggest this?

Meanwhile the CB members, geniuses that they are, went ahead and green lighted a proposal that will further overburden the already overcrowded schools. No real community benefit except that there will be new buildings. Corona has been inundated with new buildings over the past few years and looks more like a dump now than ever. But these will be different. After all, the developer said so!

Great job.
Posted by Queens Crapper at 1:15 AM

Here in NYC, where the media is so strong and cleaver (do we need to know anything more about Tiger Woods - now really?) you hear almost nothing of the petty bullshit the other 95% of us put up with....

in a place they tell us one of the finest cities in the world - indeed, self-styled world capital (did they ever take a ride under the Roosevelt el at midnight, or see people getting systematically screwed right out there in full view),

or magical place whose dynamic intellectual life attracts the worlds tastemakers and people of letters (really - and they don't see that they live in the same state as Albany politicians?)

Naw, crappy, you just churn this stuff out day after day relentlessly

Notice how they build this in places where you have lots of tweeded immigrants and few middle class complainers.

So do something about it. The taxes you redeem might actually help you for a change.

Half of Corona was already upzoned. I guess developers can just go to BSA to overdevelop the other half.

They should be building schools there instead of busing all the kids in Corona to other neighborhoods. It would be cheaper in the long run. Busing is expensive and not fair to the kids.

the U.F.T. is making sure that the dues paying teachers are located in safe, tree lined communities.

who cares if the pupils have to ride ten miles a day to school.they must rise one hour earlier,and get home late.
walking to school is exercising those calories off. and the community has a local place for the parents to meet. the parents do not show up at distant school meetings. and the d.o.e.loves that.
liberalism begins at the cradle.....and then some.....

if no busing money ,no graft for the democrat politicians. they spend and waste the taxes,and raise raise raise ,until you bleed.