“The Willets Point development is a city project – we were involved very early on,” Shulman, the President and CEO of the LDC, explained. “Our primary focus is to develop downtown Flushing to the river, including an esplanade with a pedestrian bridge to Willets Point, and Corona of course.”

On Wednesday, April 14, the LDC held a fundraiser at Citi Field, home of one of their corporate members, the New York Mets. Initially a public/private partnership, the non-profit corporation has evolved into a privately-financed group, tapping both non-members and members like the Mets for financial support. “They’ve been very supportive,” Shulman said of her member/host.

Privately financed group? I think not. And the TDC-Mets connection is going to come back to bite Claire and the EDC in their asses. We'll all enjoy that when it happens, and trust me, it's already well on the way toward happening.

Now let's enjoy some snapshots from the event: 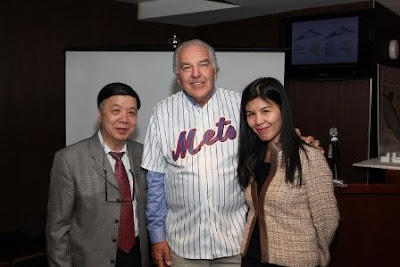 At the fundraiser, supporters of the LDC also got to meet real Mets, like 1969 World Champion first baseman the legendary Ed Kranepool, with Michael Lee, president and CEO of F&T Group and Catherine Lee of F&T China. 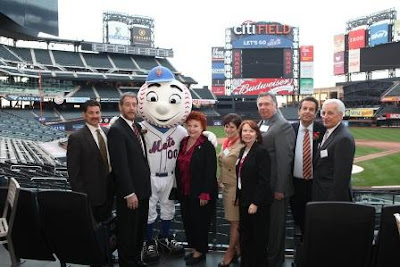 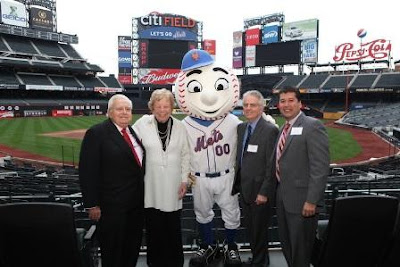 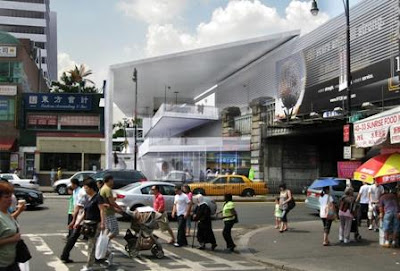 The Main Street L.I.R.R. station will be developed into a handicapped-accessible and convenient hub, with shops and affordable housing (far left) under a plan now spearheaded by the city’s Department of Housing Preservation and Development.
Posted by Queens Crapper at 12:21 AM

A former borough president named Shulman
Is screwing Queens with her bull, man.
Others pay her fines
So on lobster she dines
While others doubt she is human!

"The proposed re-invention of the station would entail elevators to the platforms, making this important train stop handicapped-accessible, as well as a crossover-overpass. Moreover, the project calls for affordable housing and retail space to be constructed over Municipal Lot 3, adjacent to the tracks."

Just when I think it can't get any worse.

Claire Shulman won't go to hell.
It's not because of her smell.
The devil don't trust her.
The evil he can muster
Can't equal that witch's spell!

I de"Claire" that she's an enema of the people.

If she's going to drag in a former Mets first baseman, I'd be more impressed if Keith Hernandez was there.

Is it too late to donate?

Hmm... Municipal Lot 1 is going to be built as Flushing Commons with affordable housing and retail space; now Municipal Lot 3 is doing the same. Is the city *really* going to give up all the parking lots to private developers in Frushing?

Hmm... Municipal Lot 1 is going to be built as Flushing Commons with affordable housing and retail space; now Municipal Lot 3 is doing the same. Is the city *really* going to give up all the parking lots to private developers in Frushing?

YES! And all supported by the Tribune, Courier, Times-Ledger, and all the local papers. When all is said and done, most people will be angry but it'll be too late to squawk!

I guess you couldn't post that "adult" photo of C.M. Peter Koo with his tongue up TDC's Michael Lee's ass!

What a crooked daisy chain of pols!