Staten Island: Watch out, you're next! 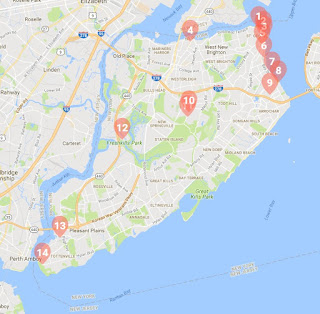 As prices continue to skyrocket in Brooklyn and Queens, developers have set their eyes on Staten Island. In the coming years, the borough’s North Shore will undergo a massive transformation, with the arrival of one of the world’s tallest observation wheels; the city’s first outlet mall, Empire Outlets; and hundreds of new apartments.

But the North Shore isn’t the only part of the borough undergoing major changes: In the center of the island, what was once the world’s largest landfill is slowly becoming the 2,200-acre Freshkills Park. The largely neglected New York City Farm Colony and Sea View Hospital campuses are being turned into new developments targeted towards seniors. And a massive planned rezoning effort could bring 2,500 new apartments to the borough in the next decade or more.

Doesn't it suck to be "discovered"?
Posted by Queens Crapper at 5:52 AM

Effing horrible, and when its all completed they will triple the taxes and make the bridges $40. One will soon not be able to afford to own a single family home in NYC anymore unless they take home $300K+ a year or are willing to live like bee hive colony's.
The Asians are already doing this, they work 12+ hours and day pool there money to buy more. Houses are only for sleeping. They will soon be everybody's landlords because our millennials refuse to study fields that will land them paying jobs and skills.
Liberal arts, music and making finger-paint don't pay.

The reason Queens and Brooklyn are popular is because of their proximity to Manhattan via foot, train, bus and car.

If anything its the Bronx that continues to undergo extensive gentrification.

"Doesn't it suck to be "discovered"?"

Yep, and it's gonna such even more to be the old GOP "boys" once the influx of young-and-affluent start to displace the "Vinnys" and "Louies".

Ironically, it'll be good old market capitalism that does it, too.

Was only a matter of time. Did you think the new ferry terminal, ferris wheel and baseball stadium would go un-noticed? They are spurring development.

Staten island you need to unite against these scumbag "developers" who will destroy your neighborhoods with fedders specials. Look to what has happened in Queens over the years. Dont let it happen to you guys too.

>They will soon be everybody's landlords because our millennials refuse to study fields that will land them paying jobs and skills. Liberal arts, music and making finger-paint don't pay.

That what the trust fund hipsters who are driving up our rents study. They don't have to worry about getting a job. Most kids going to CUNY study things that will make them money. We can't afford to do anything else.

2500 apartments? That's nothing compared to what Queens is getting.

Did they have that special sale of Staten Island legislators to the developers yet? I'm sure they have, so Staten Island is up for grabs. Look at the history of Queens since the 1980s.

All this is madness. These neoliberal idiots, from the developers to the electeds, who I assume are believers in the extreme effects of climate change, see absolutely nothing insane about putting a humongous ferris wheel on the coast in addition to a concert hall. These idiots don't expect another major hurricane to arrive again or even the rising sea levels?

Have these dopes been to Lake Ontario upstate, even Mario's son has. Do they remember that New Jersey roller coaster standing half deep in the water 6 years ago.

Other than stating the obvious, this is going to fail big time. Unless every hipshit in the nation and from Asia, India Russia and Europe are going to pilgrimage to this city, these are going to be fucking deserted.

@ facetious Rob, you don't think the Louie's and Vinnie's have kids of their own. If You think the majority of the public is embracing this hipshit zeitgeist, you are sadly mistaken.

"Facetious" Rob here with news for you; the Louies and Vinnys are the ones selling their precious parcels to developers..or doing it themselves.

S.I. is mostly "family owned" -in all sense of the phrase.

Whenever types like carp about this sort of thing, some of which I agree with, you should remember that when someone sells the house they worked 20-30 years to pay-off, they are looking to get as much out of that deal as they can.

When you look to change zoning covenants to restrict this sort of thing it will inevitably pit you against some of your neighbors looking to "make a killing".

point taken. apologies for the tag.

As the saying goes. "No Chinese, no Real estate market".

Not to mention in the past those money are launder from there to here from what I heard. Now the prices are overshooting and no one is buying that high prices because the money are drying up. China is restricting outward cash flow and they cannot buy real estate in the USA with it. (Although there are loopholes like oh my relative's kid is in college in the USA and need money to transfer in, etc.. but you need proof).

Thus, no chinese, no real estate market. It's the truth.

You say bronx? But problem is chinese aren't buying bronx as much. Thus you see a slow rise in price.