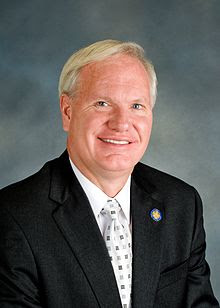 "I will not stop fighting against the current Mayor, or anyone who tries to slow the progress of our great borough and city"

"When I started this campaign five months ago l knew that I was facing an uphill battle if wanted to topple an incumbent mayor with deep pockets. Though uphill, the battle was not impossible. If able to stay in this race the entire way knew that with my resume, coupled with the incumbent's disrespect, disregard, and disdain for the everyday New Yorker, my message could resonate with New York. Five months later, however, l have found that staying in this race without being beholden to dark money is becoming increasingly difficult. Therefore, it is with a somber heart that announce that as of today l am officially suspending my campaign for Mayor of New York City."

"Throughout my career in government l have prided myself on being an outsider who made it to the inside and got things done. Unfortunately, in a race like this, being an outsider doesn't get you much. These days, it seems, elections are won with dollars, not votes."

"When the election year politics end and this Mayor has to focus on governing we will see his flaws. As New Yorkers we will have to hope and pray that his mismanagement of the City does not run our city any further into the ground or slow our progress anymore."

"Suspending my campaign for Mayor is not the end of the road for me. I will continue to be the State Senator from Queens and represent the interests of Queens in Albany where was able to get 13 bills signed into law last year. I will not stop fighting against the current Mayor, or anyone who tries to slow the progress of our great borough and city. I will continue to pass progressive legislation, fight to make New York more affordable, and ensure that the government works for everyone."
Posted by Queens Crapper at 3:35 AM

We are living in dark days...

I cannot stress any harder how De faustio must be stopped. This city is going to be unrecognizable, as if it isn't right now, after November. It will be nothing but more massive towers, privatized parks, wrecked infrastructure, and sporadic and rising crime that will go unnoticed and ignored.

It's too bad Avella couldn't compete. It's alarming that Mayor Big Slow is STILL getting donor money and major endorsements. Maybe Tony should have never got behind that internet censorship bill.

"THE STATE SENATOR FROM QUEENS" There are no others? What an ego.

I will say all of the above...

""I will not stop fighting against the current Mayor, or anyone who tries to slow the progress""

Continue with what "progressive progress" ?
Every dam thing these democrats have done has been change for the worse.
I honestly can not think of one dam change that was good since Moses built the Verrazano bridge.
Isn't Avella the rocket scientist who wrote a failed bill to compel internet blog owners to remove speech, discussion any politician and public figure deems harmful.
I would not want anybody looking to chip away or shit all over the US Constitution for NYC mayor.

That sucks. He would have been a great mayor. Much better than the clown we have now

For the second time Avella has backed down. The first was when he retreated from running for Queens borough president.
HEY, TONY...PLEASE REFUND MY CAMPAIGN DONATION.
I have yet to decide whether I will be voting for you to continue to be my NYS Senator.

He doesn't get much legislation passed either way.
Too bad. He's a decent guy.
But money crushes the weak decent guys all the time.

I knew he would quit. No one in Queens wants to support him financially.

Sorry to hear this.

Did it register in any significant way that this gadfly lightweight was running for mayor?

I'm not a quitter !
that's why i'm always drinking after reading this blog

What the hell can we do?????
Well only 2 things at this point because the dumb sheeple will re-elect all
1-Put up with it
2-Move

Things are gonna get much much worse especially if your aging. If you own property you will become a cash cow via taxes and wont be able to get healthcare when you get ulcers or a stroke.
--Its over.

Not worth putting yourself or your family through the nonsense of an election if you aren't (ready to be) committed!

A Democrat won't be enough. They have to run too far left to get the crazy base from the hands of DuhBlaz.

Another independent, like Bloomberg, to come in and run as a Republican, take the Republican votes (all 2,000 of them) and siphon of the moderate Democrats.

That is the way to beat DuhBlaz.

What an ass wimp! This guy has NO fight in him. If you're too weak to take on de Blasio then stop running for higher office, you suck, realize that.

There is so much more to this story that is not being reported.
First he is no one outside of his district
Second he couldnt raise the funds
And then there is the pesky thing about actually paying his people. Cant do that without raising funds.
Look at the campaign finance records. People are owed $$$.

What an ass wimp!

Yep, that's what you are. Honest Tony has no chance against the corrupt machinery where money is no problem in electing the "right" candidate.

I don't get it.
Avella, a career politician back to his days in the CAU, is not savvy enough to know that he never had a chance?
Now he sees the light?
Somebody in the Dem machine has got a book on him.
Blackmailed into quitting?
You never know.
This is politics, my citizen friends, where anything goes and usually does.
One thing for sure, Avella's career is at an end.
Not to worry though.
Isn't it in 2 or 3 years he gets to retire with two fat pensions...one from NYC and the other from NYS?
Nice if you can get if.
Meanwhile, WTF laws has he gotten passed that really benefits us?
Hmmmm, few and far between.....though not entirely his fault.
The crooks have banded together to crush him.
I'll vote for his te-election anyway. Better than having a shady machine Senator.

The "Machine" wins again !
Tony had no chance of ever getting on the ballot.
I'm good with him not running because he is more valuable working for us on local issues.

Man for those idiots who called him an ass or no spine whatever, go take a look at yourself.

It takes money to run for mayor. It's just like it take money to keep your car running because without money, you have no insurance and no fking gas to keep it running. Get that into your thick skull. It's the most elementary analogy.

Also the one who raises the most money sometimes has the deepest and more complicated and BLACK market connections. Stop being naive. So if I have a mafia connections do you think I will be able to run deep.. you bet I can especially if they donate money to me and I do them money-related favors in the future if I won. (like trump).