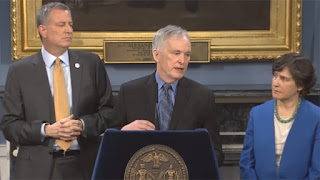 It was a simple question about Corrections Commissioner Joseph Ponte, and a scathing Department of Investigation report showing he drove his city car out of state, logging 18,500 miles — charging gas and tolls to the city as well.

“You have to live under a rock not to know it’s not proper to take a city car and use it for personal use, no matter what your guidance is, something should say to you, it’s not the thing to do,” CBS2 Political Reporter Marcia Kramer asked Mayor Bill de Blasio.

“The bottom line is, he’s not from New York City. He’s not used to the New York City government, he’s used to other jurisdictions, each jurisdiction has a different approach,” de Blasio said.

CBS2’s Kramer did some digging, and found out that prior to coming to the city, Ponte ran the Department of Corrections in Maine where he personally approved the policy on the use of state-owned vehicles.

“Off duty use of state-owned vehicles is prohibited,” the policy said.

“Under no circumstances are state-owned gas credit cards and electronic toll devices to be used for personal use,” it continued.

A different jurisdiction, but the same approach as New York City.

A few more points to up the BDB sleaze factor.
Posted by Queens Crapper at 6:51 AM

Nothing to see here, just keep moving along!

Interesting how there are two sets of rules.

One set of rules for us lowly subjects and no rules or limits on our tyrannical masters!

Realize that this is just more of the perks available to those working for the de Blasio administration.

I wonder if I can get a job within the administration.

No work and numerous benefits...

Again, learned at the feet of the pro's.

HRC to this day still doesn't think a private server was illegal.

Following the rules if for the little people. (to paraphrase Leona Helmsly)

Don't even waste your time (or life), (sarc), with trying to get a city job in THIS crooked-and-corrupt administration that continues to create adversity, beggary, obscurity, quiet desperation and PUBLIC SQUALOR for We, the taxpayer funded constituents (whom this protected-and-disgraced shithead willfully ignores with impunity), versus PRIVATE SPLENDOR, power and privilege (neither of which has been earned, much less deserved), and unjust enrichment for the empowered idiots and inmates who currently govern the asylum known as City Hall.

Face it, Queens Crapper prisoners: We've lost all power and control of this 'KLEPTOCRATIC KAKISTOCRACY-PLUTOCRACY,' as evidenced by my OWN personal experience with repeatedly contacting the mayor and his pal, Melissa Mark-Viverito, as well as a worthless affirmative action hire, Letitia James (who ignores my documented case in their archaic database), and everyone else on the city payroll, all of whom are intensely incompetent, arrogant, dismissive——and, now OPENLY showing signs of depraved indifference, sociopathy, psychopathy——and, that's on top of zero training that leaves a citizen to his/her own devices, where tragedy is just waiting to strike before any serious action is taken.

For further proof, just look at how many innocent children had to die before Child Protective Services woke up from suspended animation. Even death and murder aren't enough to persuade City Hall that the entire administration is more entrenched in corruption, graft, greed, cover-ups, kickbacks, payoffs, cronyism, nepotism and overall, monstrous fail (and taxation without representation)——all enforced, condoned and reinforced by this crooked, corrupt and disgraced mayor himself!

Never trust anyone in this openly practiced lair of criminal sociopaths in city government,
sarc and JQ——LEAST of all anyone from the Department of Investigations, from lackey Mark Peters all the way down to the dungeon-level sycophants.

For years, I have presented credible evidence of NYC corruption to Mark Peters and his Inspector General henchmen, and all of it has been totally dismissed and ignored. The latest two cases involve profligate, wanton waste with a walking free criminal named Queens Borough President, Melinda Katz, who in 2015, spent $920,000 to beautify Kew Gardens Plaza after the previous BP-thief, Helen Marshall evicted a perfectly good statue on December 15, 2012 (Triumph of Civic Virtue), where the only crime was the statue's urgent need of a $50,000 cleaning, conservation and preservation (because of willful neglect that dated back to walking corpse Claire Schulman and her own personal belief system, versus fiscal obligation to maintain repair this precious marble monument), and instead the statue was evicted to Green-Wood Cemetery at a staggering cost of $200,000 of our publicly unauthorized taxpayer money, that no one in Borough Hall ever asked us if we wanted, and neither were our staunch objections in the media and at Community Board 9 meetings reviewed, much less acknowledged.

So, what was the DOI's reply from their numb-nutted IG?——thanks, but NO THANKS (we will not be investigating - as if they have a choice to reject corruption!). Likewise, there was a serious matter of fraud, cover-up and official city misconduct that involved NYCERS and pension tampering that purported DOI Investigator, Ricky Young was supposed to be handling. They are all an intentional embarrassment to primates, and it's the reason why nothing is ever taken seriously when ever languishing constituents like me contact our public watchdog agencies of epic fail, and the reason for why vigilantism, crime and violence are all rising faster than the ocean levels!

Alas, the city payroll lackeys have learned only too well the standard operating procedure that is condoned and reinforced by their ruthless, arrogant henchmen from above (the breeding point of all corruption, graft and endless greed itself): 'Delay, Deny——And, Hope That You Die' (where people actually HAVE died, whilst waiting for ANY government help for the rank-and-file, which is city approved illusion, not to mention TRUST——which is for suckers!

Get out of NYC ALIVE while you still can, native peasants——this administration kills more efficiently than ALL of the chapters of organized crime ring families WORLDWIDE——and, anyone who blows the whistle is whacked faster than Comrade de Blasio can blaze up a doobie!

Interesting how Ponte followed the rules - and even wrote the rules - in Maine. But when he came to NYC, something corrupted him. Was it seeing what was going on in de Blasio's administration that turned him to the Dark Side? Or is it just something in the water?

When reporting corruption, graft and greed is treated like a crime instead of the actual crime reported (as people risk their lives to blow the whistle in the first place), then corruption is entrenched (like right now in the most crooked-and-corrupt administration that now surpasses the Boss Tweed era more than a hundred years ago)!

Between City Hall and Albany, the corruption is so completely entrenched, that it now DEVALUES honesty itself (which is the reason for why violent crime, cover-ups, lawlessness, vigilantism and a 'See No Evil, Speak No Evil and Hear No Evil' mantra is infecting the rank and file with no one blowing the whistle, because the system always punishes and destroys the whistleblower, as people like Ponte and his pal, de Blasio continue to be rewarded for monstrous fail)!

What does this guy have on Mayor Big Dope to warrant this absurd level of support?