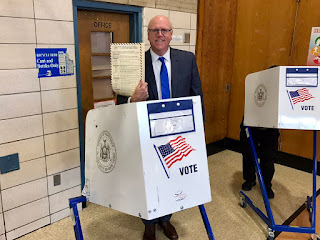 The Queens Democratic Board of Elections commissioner, who in the past has come under fire for conflicts of interest, is quickly becoming one of the highest earning recipients of Queens court patronage, Gotham Gazette has learned.

In 2014, Jose Miguel Araujo, then the newly elected BOE president, was fined $10,000 by the city's Conflicts of Interest Board (COIB) -- the maximum penalty for nepotism -- because he gave his wife Rita Patron Araujo a job as a temporary clerk between 2010 and 2012.

The fines issued against Araujo and other BOE employees followed a scathing 2013 Department of Investigation (DOI) report, which found the agency to be rife with nepotism, incompetence, and overall dysfunction.

"The imposition of the maximum legal fine on the Board’s President should send a powerful message that this conduct will not be tolerated,” DOI Commissioner Mark Peters said in a statement at the time of the fines.

Despite the incident, Araujo was renominated for the position by the Queens County Democratic Party and reconfirmed for a four-year term by the City Council in 2016. Since then, his law practice has become one of the top earners of Queens Court patronage doled out by the Queens Surrogate’s Court and Queens Supreme Court, raising questions about his impartiality as a BOE commissioner and other conflicts of interest this outside business might present.

Before he became a commissioner, from 2005 through 2007, Araujo earned significant payments from the Queens Surrogate’s Court, which settles estates of Queens residents who die without wills. The appointments required Araujo to act as a “guardian ad litem,” to advocate for individuals incapacitated by age or mental illness. After Araujo joined the BOE in 2008, the appointments stopped. Several payments trickled in again in 2011, but after the 2014 COIB fine, the appointments escalated from both Surrogate’s Court and also Supreme Court, which gave Araujo work as a court evaluator or counsel for guardians of incapacitated individuals.

Of the roughly $140,000 Araujo earned from Queens court appointments since 2005, half of the money -- $69,513 -- flowed to Araujo’s practice in the last two years, according to records obtained from the New York State Unified Court System.
Posted by Queens Crapper at 5:54 AM

But, reporting more of the same grinding corruption, graft and greed on THIS blog changes nothing——and, short of a SECOND AMERICAN REVOLUTION, nothing is EVER going to change.

Hence, nothing has changed because nothing ever changes!

LMAO!
Crooked as a winding country road.
Do you know that if you go there to look up an elected official's campaign contributors , that polis notified about your inquiry?
We never had a democracy, and our republic is an illusion!

>Araujo was renominated for the position by the Queens County Democratic Party
>Since then, his law practice has become one of the top earners of Queens Court patronage doled out by the Queens Surrogate’s Court and Queens Supreme Court