Yesterday, Liz Crowley sent out a fundraising solicitation in which she admitted that she is going to have a tough time getting re-elected to a third term (which would bring her total time in the council to 13 years!): 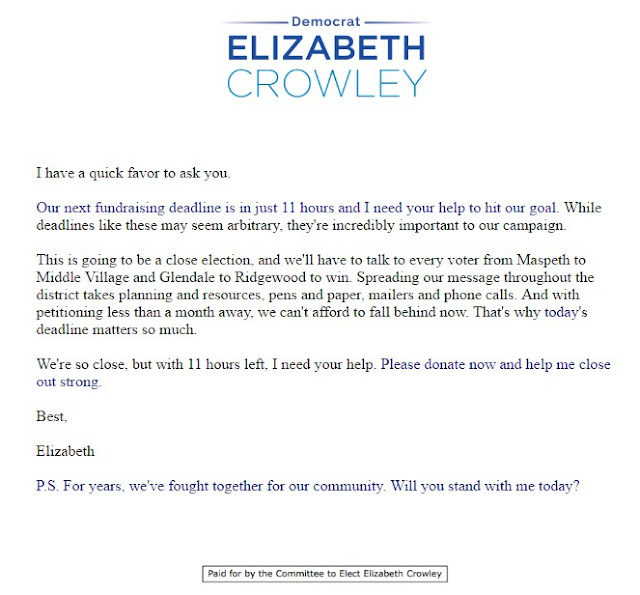 I suppose this is why she recently introduced a useless bill - as the sole sponsor - to require that a separate Inspector General oversee the DHS & HRA.
Posted by Queens Crapper at 12:33 AM

Or perhaps you may be an incredibly weak candidate...

Don't underestimate the mindless moron voters of Queens. They will come out in full force to re-elect her.

That's a standard fundraising appeal. Similar letters are used by many candidates. Making something out of nothing is just another form of fake news.

But WTF could support this dolt? She is an airhead.

She already raised $300k and she needs even more???

That's a standard fundraising letter? Not in Queens County. The standard ones generally direct the target to donate because it's the candidate's birthday or some other non competitive reason.

Maybe the Diz can have her cousin Joe rent her basement as an 'office'. That would be good for a few thousand to buy her reelection.

Alas, 'Dizzy Lizzy' gives MENDACITY a bad name——she continues to lie, cheat and steal——easier than she breathes! And, then there is the matter of completely ignoring her ever languishing constituents, when she couldn't even save a Kew Gardens statue on December 8, 2012 (Triumph Of Civic Virtue) from unnecessary and arbitray eviction!

NO MORE 300% FALSE, FAKE AND FAILED POLITICAL DYNASTIES IN QUEENS COUNTY——THEY ARE BANKRUPTING OUR RESIDENTS WITH IMPUNITY——and, the public be eternally duped, bilked, scammed and damned! Even organized crimes families don't wield THIS much heft!

Well bob holden will use the roofing scam and the homeless shelter and people from the neighborhood will only look at that and vote for him. Not his corrupt past. Same with barnwell he went to the protest and that's all they saw. They didn't care he's not from Maspeth and knows nothing about it.

She's barely literate, but the idiots of Queens will re-elect her. The Irish in her area equate the Crowley Clan to the Kennedys. I don't understand it, but these idiots keep electing the same crap over and over again. She's screwed her constituents so many times, especially her latest blunder -- moving the homeless to the Holiday Inn in Maspeth so they wouldn't put it in Glendale (where she lives) and then lying to her constituents about it. People need to wake up, but probably won't. She'll be voted in again.

The dominos have started to fall - first Marge Markey, now Dizzy Liz Crowley. Hopefully Vallone will be another one to go.

Anonymous above mentions Holden's corrupt past. We need clarification. Crowley is the product of an unethical organization. Just take a look at the money Sweeney pulls in as a result of his political plum as counsel to the public administrator. Holden comes across as a Klanner. Aren't there any honest people to clean up the mess in the 30th Council District? Have the Republicans made any credible effort to field a qualified candidate. I'm sure there must be one out there. The Republicans are so jealous of each other that it is impossible for them to unite to achieve competent representation. This is a one-party system. The people get what they deserve.

I don't buy for a second that Dizzy Lizzy had the juice to get Glendale shelter shelved in favor of the HI in Maspeth. She is just a spectator and not a player in decision making. She is good at following party orders. The Glendale site is just sitting in wait for the next money making scam that comes this way (don't be surprised if it gets picked for a mini-jail when DeBlasio shuts Rikers). As to Holden having a "corrupt past" please enlighten us as to what that might be so we don't make another mistake like Crowley. Even if Holden isn't the best candidate possible at least he's not clueless like our current Council Member.

The Irish equate the Crowley Clan to the Kennedys ?
But why ?
The Kennedys were the most liberal corrupt sacks of shit the country has ever dealt with. Over 50 years of suffering thanks to those people.
That immigration act of 1965 the Kennedys were behind did more damage to Americans then Qbama did in 8 years.

"As to Holden having a "corrupt past" please enlighten us as to what that might be so we don't make another mistake like Crowley."

He stood up to Dennis Gallagher and won. There are still a bunch of Pinky holdouts in the area and that's what these charges of corruption are about.

Bob Holden knows his community, he has lived here his whole life and has worked only for it's betterment as president of Juniper Civic, Planning Bd.5 and has never sought political office. He has organized protests, rallies and meetings not for his own gain but for the best interests of his community all while teaching college for 40 years and raising a family.
Crowley just stepped into the family business and doesn't really know the issues but even worse she goes along with the party line most of the time and has supported many issues from the far left faction of the City Council.
If an unknown like Barnwell could defeat an entrenched hack like Markey, Holden has a good shot and she knows it.

When Crowley was asked at a civic meeting if she knew what she was doing at the City Council, she answered "I don't even suspect anything".

Holden's dark past... As a college professor? You're fucking kidding right?

Seriously, I probably don't agree with Holden on a lot of things, but if there's one thing that is clear, he's not part of the establishment and cares a lot about the community. We need more people like him running for office all over this borough.

About the bob holden corruption just read articles from this website back in October 2008 they highlighted some of his crazy antics he has done with JPCA.

Can't believe some of the idiots on this thread are trying to discredit the most honest and hardworking civic leader there is, Bob Holden. He has been working for decades to defend and maintain the quality of life in his neighborhood. He beat the sex offender councilman, A corrupt developer, stopped the Cross Harbor fiasco in Maspeth and beat back the Maspeth Homeless Shelter and stopped de Blaaaaaasio in his tracks. The effen idiots above are too stupid to be taken seriously.

The pink Gallagher dickheads are crawling out from under their rocks after years of hibernation and obscurity. Unless it's Brian McLaughlin, Dizzy's old BJ pal trying to enact revenge. In any event Dizzy Lizzy is already in trouble. People are sick of her dumb nasal mispronunciations along with the deer in the headlights demeanor that screams out incompetence to everyone but her. She's so dumb she thought that TuPac Shakur was a Jewish holiday, really, not kidding. Ask her old lawyer.

I'd love a chance to vote for Holden. Where do i send my $$?