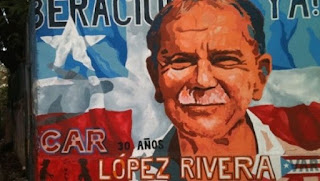 On Monday, Council Speaker Melissa Mark-Viverito (D-Manhattan, Bronx), a native of Puerto Rico, released a letter to the parade’s board commending the organization “for recognizing that Oscar Lopez Rivera represents the voice, tenacity and resolve of Puerto Rico and its people.”

The letter, signed by 30 members of the City Council including seven who represent Queens, concludes by saying, “We stand in solidarity with Oscar and express our full support for the board’s decision to recognize and uplift the legacy of Oscar Lopez Rivera.”

The Chronicle contacted the offices of all Queens Council members to ask about either their reasons for signing the letter or whether they intend to march. A handful responded via email.

“Oscar Lopez Rivera was pardoned by President Obama because he was never convicted of a violent crime,” Councilman Dromm (D-Jackson Heights) wrote. “He is one of a number of people being honored at the parade for his work highlighting the struggles of his people. The parade is an event that gives all of us an opportunity to celebrate the Puerto Rican people and I proudly support their efforts.

“Additionally, I am curious as to why some people are so unwilling to give Oscar a second chance but glowingly highlight a visit from Sinn Fein leader Gerry Adams to dedicate Easter Rising Way in Maspeth [last November] an effort that I also supported.”

Councilwoman Elizabeth Crowley (D-Glendale) said she was not attending the parade but that her reasons had nothing to do with Lopez Rivera.

She also took issue with any implied criticism tying Adams, a leader in Northern Ireland Sinn Fein political movement, to terrorism. While he had been imprisoned by the British as a young man, he has continuously denied involvement with the Irish Republican Army, a violent revolutionary group long tied to Sinn Fein.

“Adams was central to bringing peace to a long, bloody conflict in Northern Ireland,” Crowley wrote. “I’m pleased that while he was visiting New York City, he could make time to celebrate a historic moment in Maspeth at the co-naming of Easter Rising Way.”

Do you ever feel like you're living in a bizarre nightmare by staying in NYC?
Posted by Queens Crapper at 7:00 AM

Univision, which is run by a billionaire pal of Hillary Clinton, is boycotting this parade too. Goya, the most used food product of the hispanic demographic, refuses to sponsor also.

You're right crappy, it's truly upside down bizzaro world in this damn city right now. It's despairing and this town ain't worth supporting or living in anymore.

"I don’t regret setting bombs,"Bill Ayers said. "I feel we didn’t do enough."

He that walketh with wise men shall be wise: but a companion of fools shall be destroyed.
Proverbs 13:20.

Be not deceived; God is not mocked: for whatsoever a man soweth, that shall he also reap.
Galatians 6:7

History repeats itself again and again...

Look who started this, the bitch council speaker Melissa Mark-Viverito, who thinks it is okay for people to piss and drink in public.

She may have money, but she is SO GHETTO.

I left NYC two years ago, and it was the best decision of my life. Life outside of Queens is so much better. I feel bad that i don't miss it.

I see Dromm is still pushing fake news. The man was not pardoned, his sentence was commuted.

Adams and Rivera are both criminals

I'm reading the bio of Gerry Adams, and other than an arrest for suspicion of involvement in a political murder, a charge which was then dropped, he has no criminal record. Dromm's history has never been too good, even though he once was once a teacher.

That's because council members terrorize us!

Looks like Mayor Dip Shit confirmed he is marching.

This man has the blood of New Yorkers on his hands, and they're honoring him.

Who's next? Rasmea Odeh?

the bombing ofChelseaNYC (11),Egypt bus of Coptics,& ManchesterU.K. is stopping me from attending our local Memorial Day Parades for the first time in 10 yrs. In N.E.Queens.
Korean war Navy Vet.

flowers & candles after are useless.the anti- infidel gangs must be infiltrated in their meeting halls.

Has Paul Vallone said anything about the parade? Have no idea if he was planning to march, anyway.

"I left NYC two years ago, and it was the best decision of my life. Life outside of Queens is so much better. I feel bad that i don't miss it."
What State did you move to so we all can come to live in and fxck it up like Queens ?

"What State did you move to so we all can come to live in and fxck it up like Queens ?"

Boycott update-Telemundo dropped out of the parade, so the two major spanish speaking networks are not broadcasting the parade.

Bronx Borough President/Maitre'D, REBNY whore and Mario's son stooge Ruben Diaz is admonishing all those against Oscars' presence as ignorant. Mario's son by the way, if people give a shit, has decided to boycott the parade. Surely because De Faustio is appearing because everyone knows that he still needs the hispanic vote, despite allegedly being unbeatable according to recent polls. (apologies for rambling there)

Even our GOP pols like Joe Borelli sympathize with organizations that have been designated terrorist organizations by foreign countries.

Gerry Adams is most certainly a terrorist.

We're all surprised that a parade requires multiple corporate sponsors and politicians. I understand that there's a parade committee and that a bond needs to be paid to the City to hold the event. After that how much money do you need to get people and school bands to march for free? Unless of course, they've been paying people to march in the PR Day parade all these years? Too bad that I didn't know that this was a possible income stream.

Interesting that while other ethnicity's parade themes are either saint's days or independence anniversaries, both the Puerto Rican and Dominican Day Parades are focused solely on their countries? island culture.

Aside from the issue of honoring some one who murdered and maimed NYPD officers and NYC workers there's the issues of corporate contributions, money from NYC politicians and the aggrandizement of Puerto Rico and the Dominican Republic. If both places are so very wonderful, how come they don't stay there?

And I'm not impressed with the of hawking home cooked food and alcohol out of stolen super market carts during both parades.

We can not vote again for anyone who's willing to endorse a terrorist with THE BLOOD OF NEW YORKERS ON HIS HANDS. No matter how good they are on the issues. Much less those as terrible as DiBlasio or the Speaker.

>who thinks it is okay for people to... drink in public.

What's so bad about drinking in public? It's just another excuse for the government to control our actions and give us fines.