Is this the way to fix transit? 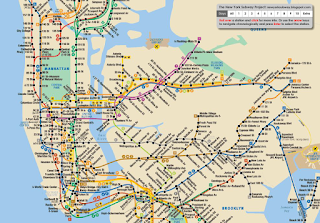 Step 1: Switch bus fare collection from entrances to on-board payment. This could cut curbside "dwell times" in half, speeding bus trips up to 20% and winning back some riders from cars, cabs and Ubers.

Step 2: Charge a congestion fee for Ubers, yellow cabs and, yes, all cars and trucks traveling to and in the Manhattan core. This will cut down on traffic and raise money for transit.

Step 3: Use the congestion revenues to equip every subway line with modern digital controls. This will allow more trains per hour and end those cascading delays.

One man can do all this. He controls the MTA and he's got the political chops to bring together city and state power brokers. Governor Cuomo, are you listening?
Posted by Queens Crapper at 6:50 AM

Why is congestion pricing ALWAYS the only answer?

We decry the inability to afford living in this city, and in the same breath scream and beg for new taxes, fees and surcharges.

And how foolish are you to believe that the moneys collected will be appropriately allocated.

Remember, the lottery moneys are used for education...

The Daily News article author is Charles Komanoff, who lives in Tribeca (I googled his name). Of course he is for congestion pricing.

"This will cut down on traffic and raise money for transit."

And it will add to the congestion of buses and subways and the politicians will figure out a way not to spend the money on transit.

I'm actually surprised that they didn't recommend a trolley on the avenues.

This shows once again that the fascist New York Democratic Party is heading in the same direction as the communist Soviet Union - when you have a closed system the nitwits running the show are in totally out of their depth, cannot make the right choices, and are running things off the rails.

The people that are running NYC have no idea what the hell they are doing.

We wouldn't need congestion pricing if we would just get rid of all the users on the street. Then there would be plenty of space for bus lanes, regular taxis and everyone else. I read that 50% of uber riders would have otherwise been on the subway. Now I get that the subway sucks (I'm on it everyday), but too many ubers means that nobody's going anywhere on the streets ether.

The next step is premium EZ pass lanes on the bridges, subways, streets, etc. If you are willing to pay you can bump the riff-raff out of the way!

Want it to pass? Make it free to politicians!

Step 1: fire all incompetent state employees who can be seen around mostly doing nothing or very little,
Step 2: privatize MTA and hire competent workers, managers.

More money grabbing scam, will not cut down on traffic/congestion, but will line the coffers just dandy, thank you very much.
I take public transportation, but let's face it, is not worth the money we are paying for it. Subway/bus/LIRR same crap.
But hey we get the best politicians money can buy!

How about we tax the buildings in Manhattan rather than give them tax breaks. All these places would be worthless without the transit system because the current NYC population could not commute here via the roads.

ah yes congestion pricing, where we take all the tax burden from everyone upstate and move it to residents who already foot the bills to keep their roads paved
-somethingstructural

By the headline, I thought this was going to be abt the BIG FAIL of the mta this past weekend with the first of EIGHT weekend closures of the N to and from Astoria. Shuttles ran along 31 Street, but mta took away buses fm 21 Street (Q69 and Q100) for those who cld take the F fm Queensbridge Stn, resulting in crowds at, for example, Broadway heading south, where ppl said they were waiting 40 minutes for any bus, & returning, for example, fm Q'bridge heading north, where there are three buses (Q66, 69, 100), but seeing the crowd, I walked home to 33 Rd before any bus arrived.

So, when I went into work Sun nite, I decided to walk to Bway Stn for the shuttle bus, which allegedly wld take me to Qns/Qboro Plaza, but after driving to 21 St & Qns Blvd, the driver announced "Next & last stop Queens Plaza," he parked at 23 Street, making more of a hike.

And needing to chg to the 4,5 to get to Fulton St, required more hiking bec 5 not running & 4 going local to City Hall/Bklyn Bridge.

This is no way to run a railroad.

And ALL our electeds MIA on this issue, inc. Costa breathing sigh of relief (per dnainfo) that all the work will mitigate all the noise at a public school.

Here's your answer-- NO-- he's not listening. He's busy planning his Presidential run in 2020.

No more city vehicles for electeds, make them but a Metrocard of
use the fucking bike lanes.

YOU CAN'T KNOCK ALL THE SUGGESTIONS IN THIS ARTICLE. SOME OF THEM MIGHT ACTUALLY WORK. I THINK THE ON-BOARD PAYMENT IDEA COULD WORK. IT HAS WORKED IN OTHER COUNTRIES WHY NOT IN THIS CITY.

"The power to tax, once conceded, has no limits; it continues until it destroys!" - Robert A. Heinlein

The only way to improve mass transit is by decreasing the population. The infrastructure just can't handle it.....

Great idea, now our Metrocards can spy on us too!

How about abolishing the MTA, and giving the operations of them to private operators.

Private operators built it and failed.